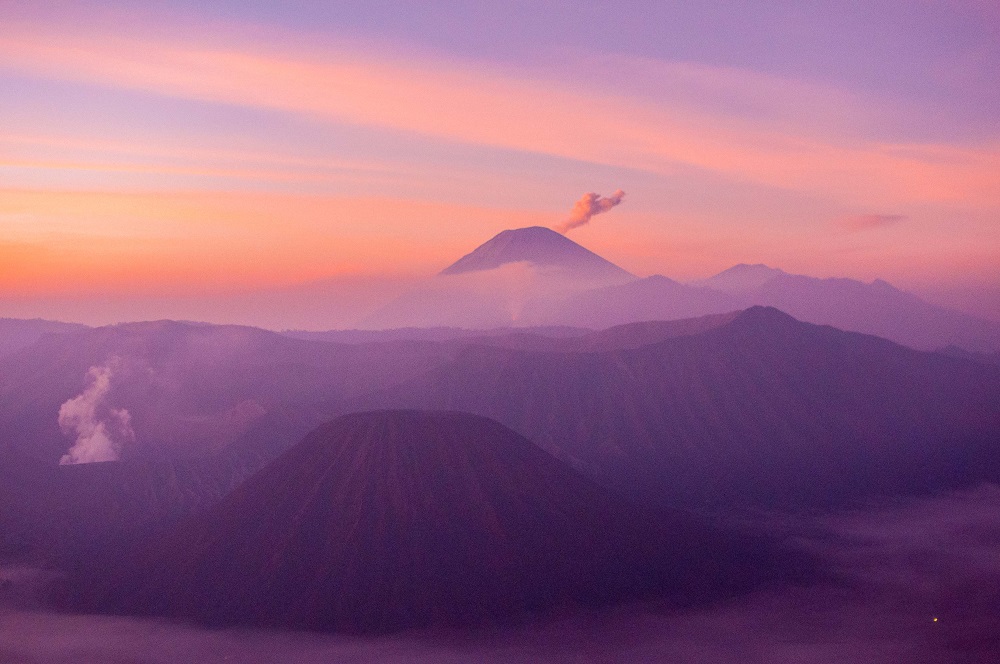 After 3 fun filled days, exploring and relaxing in Paradise we decided it was time to climb some more volcanoes and get back on the tourist path. Next stop Mount Bromo – A 2,329m active volcano in east Java.

As always on each of our little adventures, buses were involved. After a 5 hours slow ferry from Karimunjawa to Jepara we took 6 buses and an overnight stop before reaching Cemoro Lawang a small village closest to the volcano.

Our bus journeys took us from Jepara to Kudus, Kudus to Surabaya, Surabaya to Probolinggo where we arrived at 1:30am to an empty station and no buses to Cemoro Lawang until 7am (obviously!) Thanks to our amazing travel buddy Sarah who joined us from Karimunjawa, she found a couchsurfing bed for the night (free) at a lovely local Indonesian’s home at 2am! How lucky!

With minimal sleep (Muezzin at 4:15am!) we got back on the road at 7am taking a local bemo to the main bus station to catch another bus – destination Bromo! 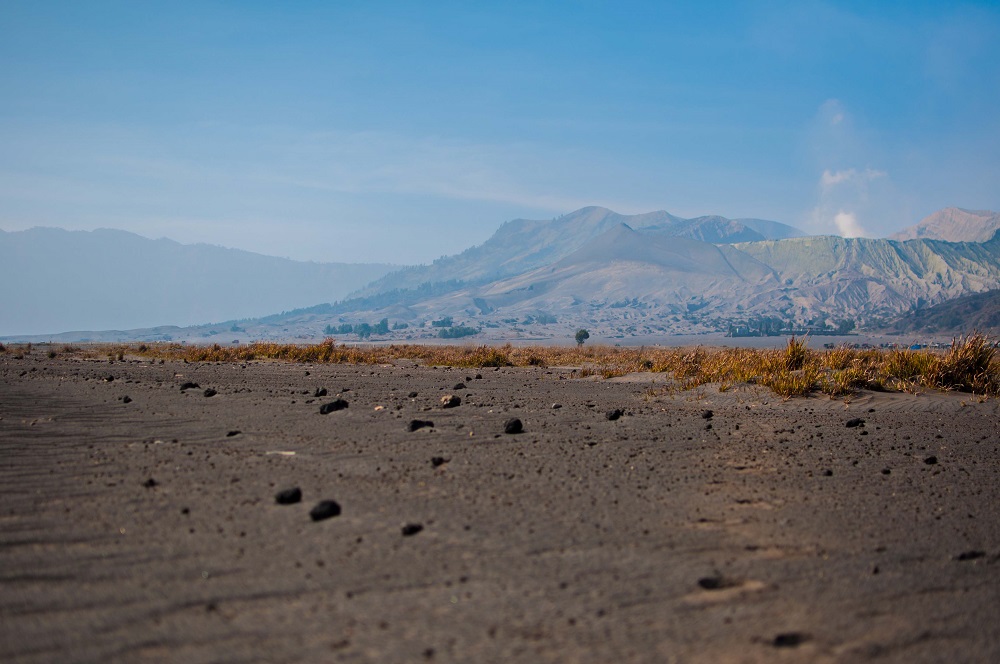 On arrival at the bus station we were ushered to a bus where just outside we found two fellow French tourists fast asleep next to it. Bizarre we thought. Maybe they just needed a bit of a nap before they got going again. Nope…….. So apparently the bus only goes when full!! Ahhhhhhhhhhhhhhhhhh!!!!!! and then it will cost each person only 35,000Rp (2.5 euros). We needed to wait for 10 more people. – Unless like Selo we paid for the whole bus! The French, once they had woken up, said they had arrived an hour earlier. We settled ourselves in a local warung, had coffee, some Roti (brioche) and stayed there for 4 hours waiting and waiting. We were told the train from the big cities in Java arrived at around 11am in Probolinggo so tourists normally arrive for the bus at midday. In the mean time we searched for other means of getting to the village. We spoke to nearly every person in the bus station whilst the other Frenchies tried to find us a truck to hitchhike up on. Nothing! Mafia style….. Only 1 bus goes to Cemoro Lawang – No one else dared take us. At around 10:00am a German couple (who we ended up travelling to Kawah Ijen with later) arrived. A little bit of good news kept us going another hour before frustration kicked in. Although the cost of the total bus was 500,000Rp and the German couple were on holiday so could spare a little more money, the remaining 5 of us were on tight budgets so we waited a little longer. Vanessa and Sebastien didn’t mind waiting with us. After another hour another German couple rocked up.  – We found it quite amusing because this particular couple we had actually met at Jepara bus station the day before and who had sat next to us on the ferry. In Jepara they had just booked tickets for a direct bus to Probolinggo for 300,000Rp. A price which we thought was extortionate and a bus we decided not to take (we took 5 buses instead and it cost less than half their price!) but they said it was the best way to get to Bromo!! Then they told us they had arrived in Probolinggo after us and had to search for a hostel on foot at 3am! Oppps. Hahaha!

Two more tourists – We were getting there slowly! But by midday we had all had enough. The most recent addition, the German couple didn’t exactly help by saying they didn’t mind paying more to go! Ok but we’ve just waited hours to get a cheaper price. Don’t just rock up and flash your money! They kept saying we should look for other buses, try to bargain and lower the price more etc. etc. all the while they were writing 200 postcards and drinking coffee doing nothing! In the end at 12:30 we decided enough was enough. We paid 65,000Rp each, almost double what we should have paid and got going up to Cemoro Lawang.

1 hour later we arrived to a pretty bizarre village. Not much but deserted, old, run down guesthouses but the cool air was a welcome addition after days of heat! 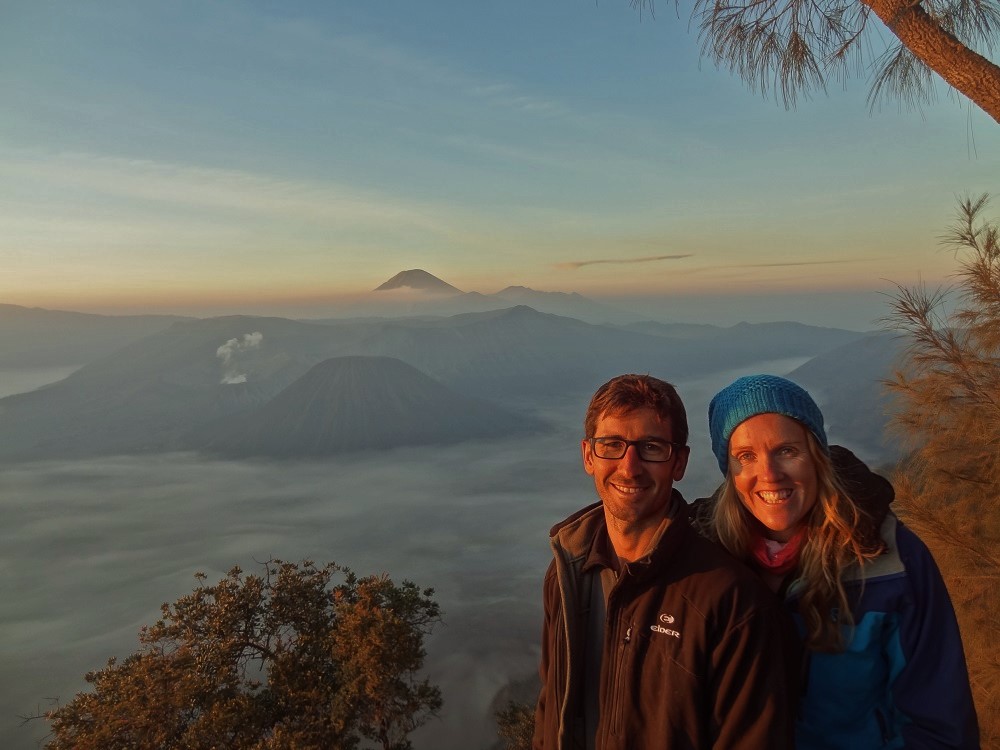 The most famous of hostels in Cemoro Lawang is Café Lava. Written in all the guide books and recommended as the only ‘niceish’ place to stay in the village. We headed there first. On arrival we asked how much was a standard basic room with cold shower – 500,000Rp!!!! 350,000Rp over our budget and an extortionate price! That’s a private 5 star bungalow with sea view, private swimming pool and butler in Bali!!!  We turned around from where we came from and went in search of a room somewhere else. Meanwhile the French couple Charlotte and Nico had found a room big enough for 5 people (JM, myself, Sarah, Charlotte and Nico. 50,000Rp each. Yes!) Although it was a bit of a squeeze it was worth it considering we were only going to sleep for 4/5 hours before starting our climb at 2am, reaching the viewing platform on Mount Penanjakan (overlooking Bromo) for sunrise.

To pay or not to pay? That is the question.

Between the discovery of our room and bedtime we decided to seek out the secret paths to climb Mount Bromo for free! We aren’t trying to be ridiculously tight with our money but all the research and blog reading we had done before the Bromo adventure had read that you can get to the crater without paying easily – So why not? Even Joko in Borobudur drew us a map of a secret pathway!

If you pass the official entrance the entrance fee is 217,500Rp per person and apparently isn’t worth it! We read all the blogs and found 3 different pathways. Meanwhile we bumped into both German couples and a Japanese couple who had ventured to the crater that afternoon and without paying!! JM and I decided to wait until the next day because the weather was so overcast, low light and low cloud the afternoon we arrived that it wasn’t worth it. Instead we would do it after climbing Mount Penanjakan the next morning.

We asked if any of them had had any issues on their way to the crater. The Japanese couple said no, Vanessa and Sebastien were asked to show their tickets but they managed to convince the guy they had purchased them the day before and forgot them and the other ‘rich’ German couple from the ferry saw a national park official waiting for them when they came back on the path they had originally taken so they took a different path back and had no issues. Although difficult it could be done but not as easily as all the blogs had done.

So we headed for an early night all five of us in a cosy room and typical my belly decides it didn’t like what I ate and I spent an hour on the ‘hole in the floor’ toilet knowing everyone could hear everything! EMBARRASSED! Imodium to the rescue – although I hate the stuff it did the job and I and everyone else managed to sleep a little before getting up at 2am.

We love to hike!

The morning climb was nothing compared to Merapi. An okish 2.5 hour hike up Mount Penanjakan to watch the sunrise over Bromo. We stopped two viewing platforms below the highest point because we’d been told that people who had booked organised trips to Bromo arrive in their 100s all in jeeps all at the same time to the top of Mount Penanjakan -The views were better and the ambiance calmer where we were. The view was incredible!!!

Plus we had the amazing luck of seeing Mount Semeru behind Bromo erupt!!!! (Not a huge, massive eruption like in the movies, more like a little puff!) 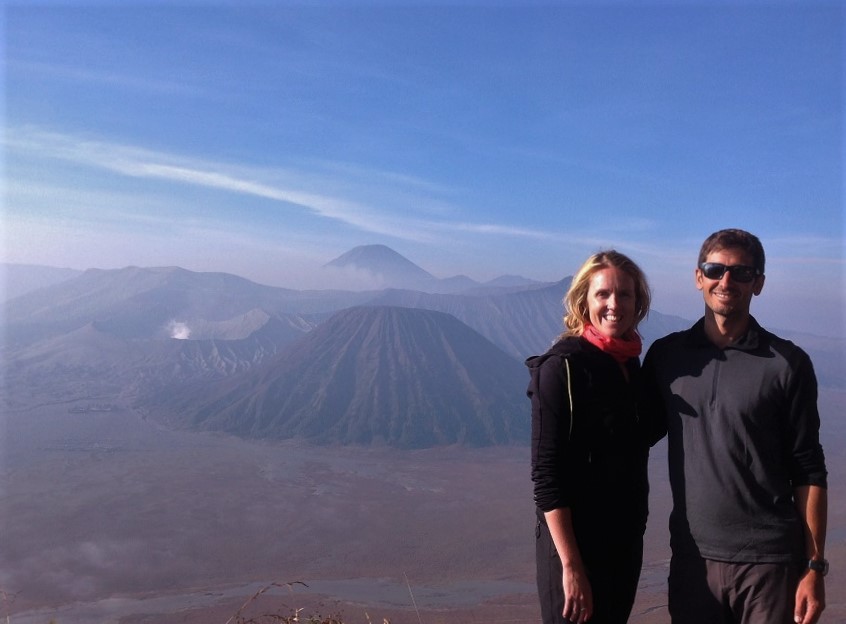 We looked above us and saw so many tourists crammed together to take their photos at the top. Our view was totally worth the nightmarish bus trip again! We stayed almost 2 hours on Penanjakan.

30 minutes after the sunrise everyone left and we had the place to ourselves along with the fun locals. We went to all the other viewing spots, had a coffee and took in the view! 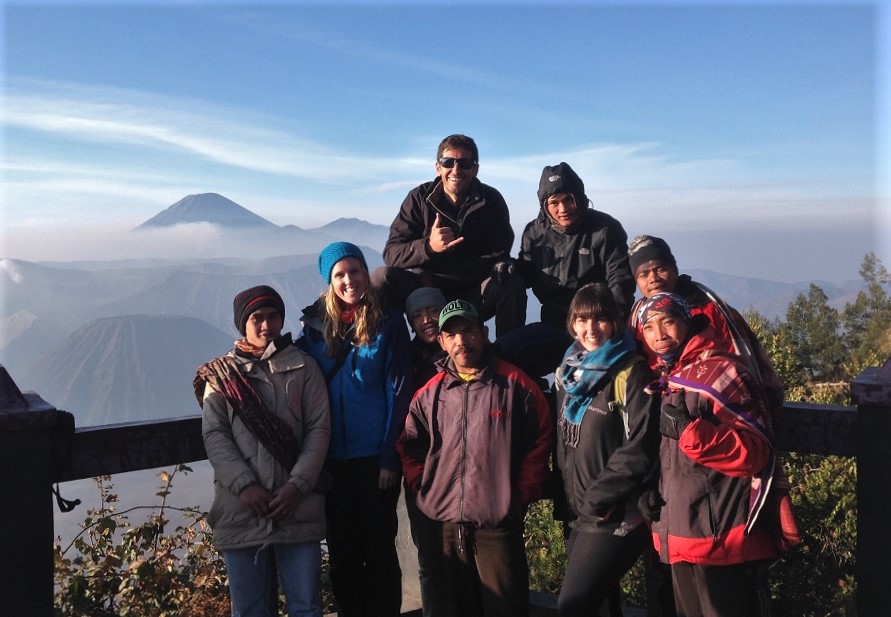 At around 8am it was time to attempt Bromo! We headed down the same way we went up and found one of the ‘secret’ paths. We passed through local farming land along a small dirt pathway, and onto the steep dusty path horses and their riders use every day. The small path descended down onto the vast plain on which Bromo sits. It reminded us of something out of an American western film. Rolling, rolling, rolling…………… 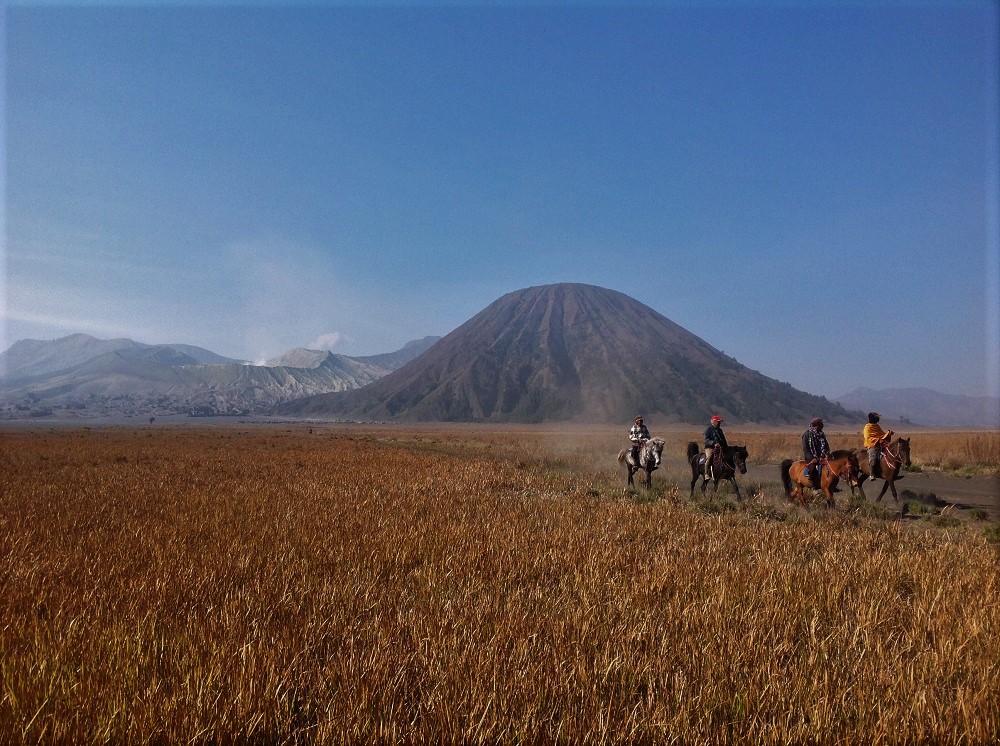 We walked for another 40 minutes before we reached the parking for the volcano. Even before we arrived we saw the extent of the tourist attraction – A car park the size of Disneyland (well not quite!) full of jeeps for the organised tours. We found it kind of sad how they arrive by jeep, stay 30 minutes at the top of Penanjakan with everyone else for the sunrise. Take photos and selfies, get back in the jeep, head to the steps of Bromo, walk 200m up to the crater rim, take photos, walk down,  get back in the Jeep and off they go……. Sadly for us no one was walking so we stood out like a saw thumb however, the area was so big we probably looked like ants! 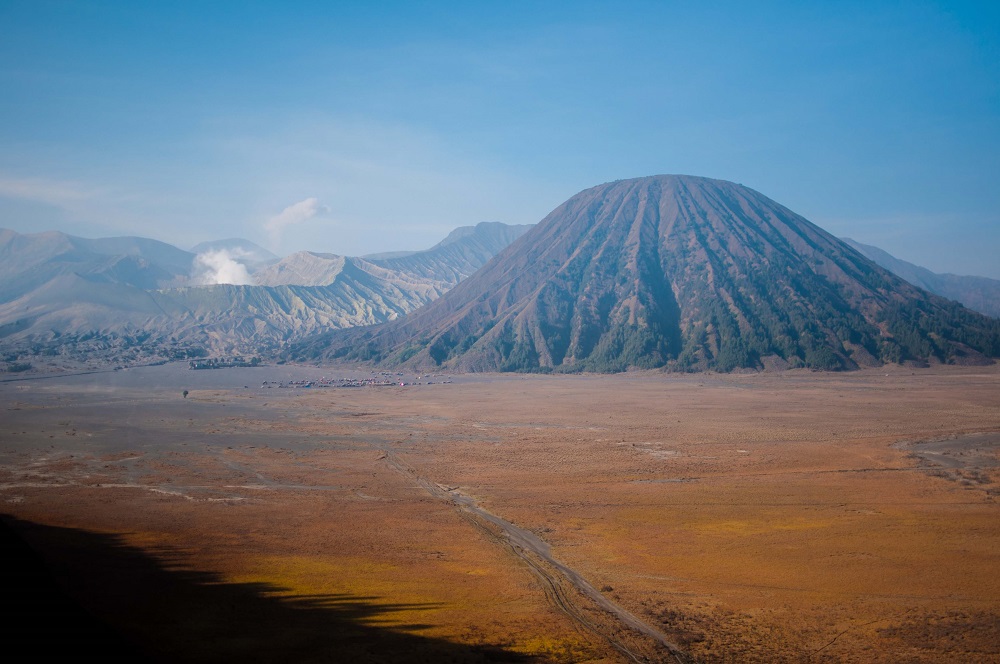 Damn we got caught!

Just as we arrived we were unfortunately met by a national park guide who had spotted us with his binoculars. He was talking on his walky talky and came over to see our tickets. Although very nice and friendly we played dumb and said we didn’t have one. Where do you get them from? Some locals had sent us in this directions bla bla bla… He could sell us tickets then and there so alas we couldn’t use the excuse and say we’d buy one on the way back!! (It was an hour walk back!) JM and I had already agreed if we get stopped we wouldn’t bother going up to the crater. We decided this just from people’s reviews and lack of excitement about Bromo itself.  People much prefer and love the Penanjakan climb at sunset.  We walked back not at all disappointed (leaving the other frenchies behind who paid and went to the crater) and prepared ourselves for the next adventure of climbing Kawah Ijen which we were really really looking forward to! (Plus we had more buses to take of course and it was likely to take some time to get to!!)

Such a beautiful morning on Mount Penanjakan watching the sunrise over Bromo – Thanks Semeru for putting on an extra show for us!! So pleased we went! 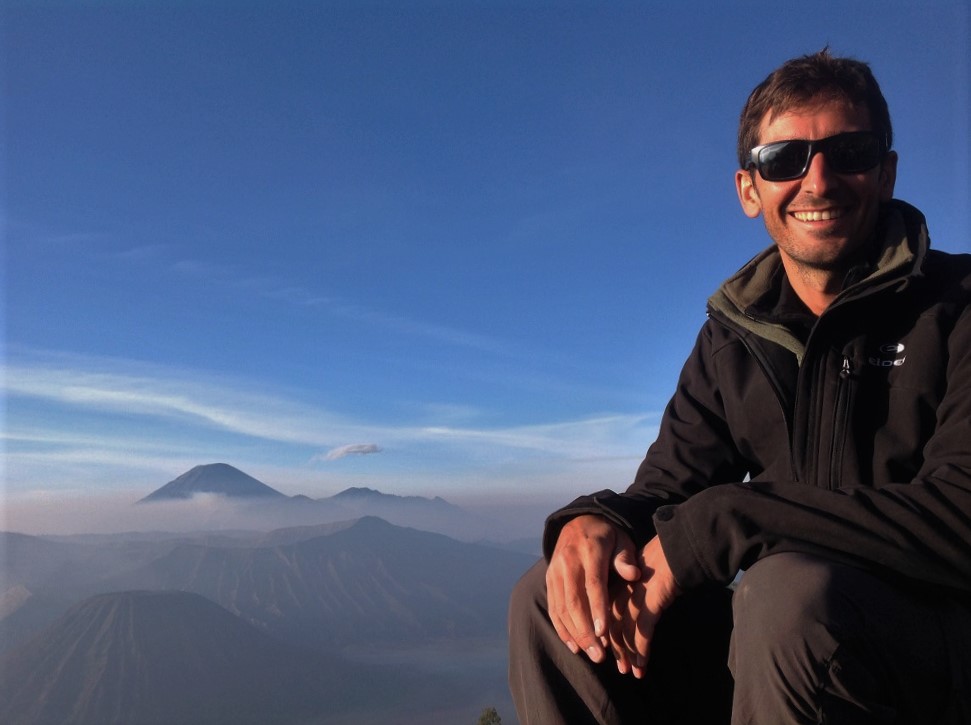 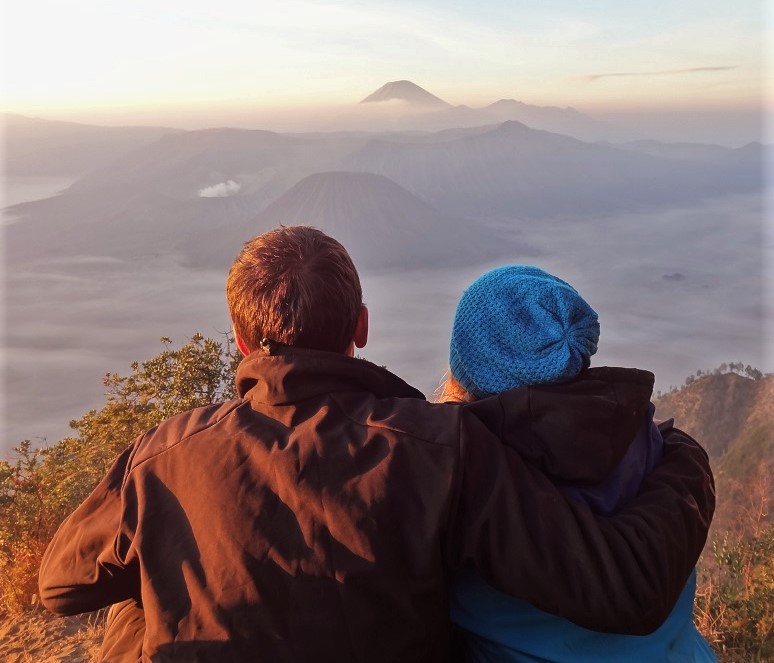