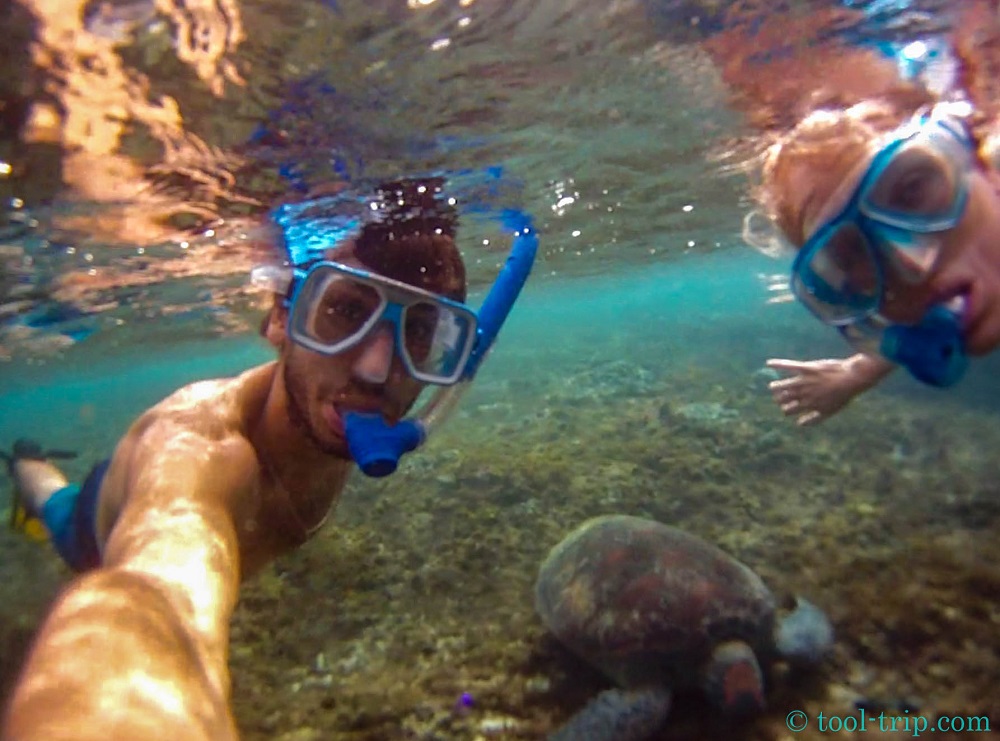 To get to Apo island requires a little patience and a lot of changes.

We took a tricycle from Panagsama beach to Moalboal bus stop, a bus to Bato, a boat from Bato to Tampi, a bus from Tampi to Dumaguete, another bus from Dumaguete to Malatapay, a free tricycle ride from the main road to the port and finally another boat (bangka) to reach the island.

For us, what made it that extra bit special and memorable was we did it all in torrential Filipino rain!! Normally that would be absolutely fine but when you sit on a bus with AC and you’re soaking wet, you get rather cold! 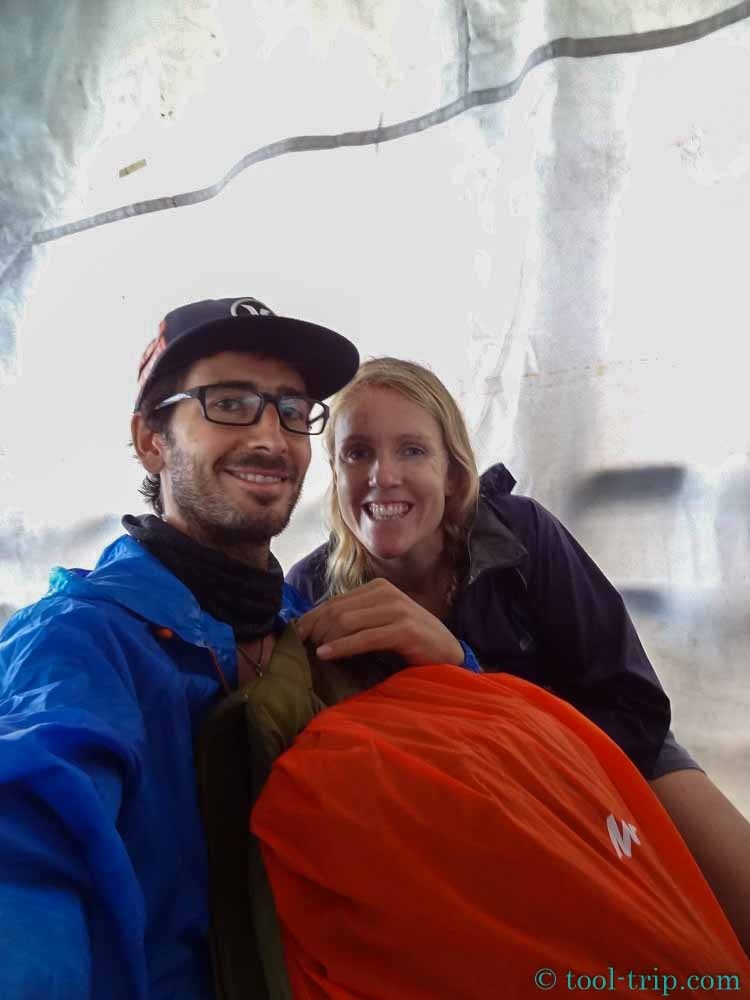 Wet and long journey to Apo

The best part for us, although probably the worst for most people, was the boat trip on a tiny bangka from Malatapay to Apo. The wind was howling and the waves a little too big for the size of our boat. We rocked and rolled for over an hour, waves splashing into our faces and horizontal wind and rain. But for some reason, maybe because we were already soaked, we enjoyed every moment of it. There were two other German guys with us in the bangka and they didn’t seem at all impressed.

We met a lovely lady called Mary also on the boat, the only other passenger with us 4. She invited us all to stay at her guesthouse for a very cheap price.  We intended to take a look when we arrived. 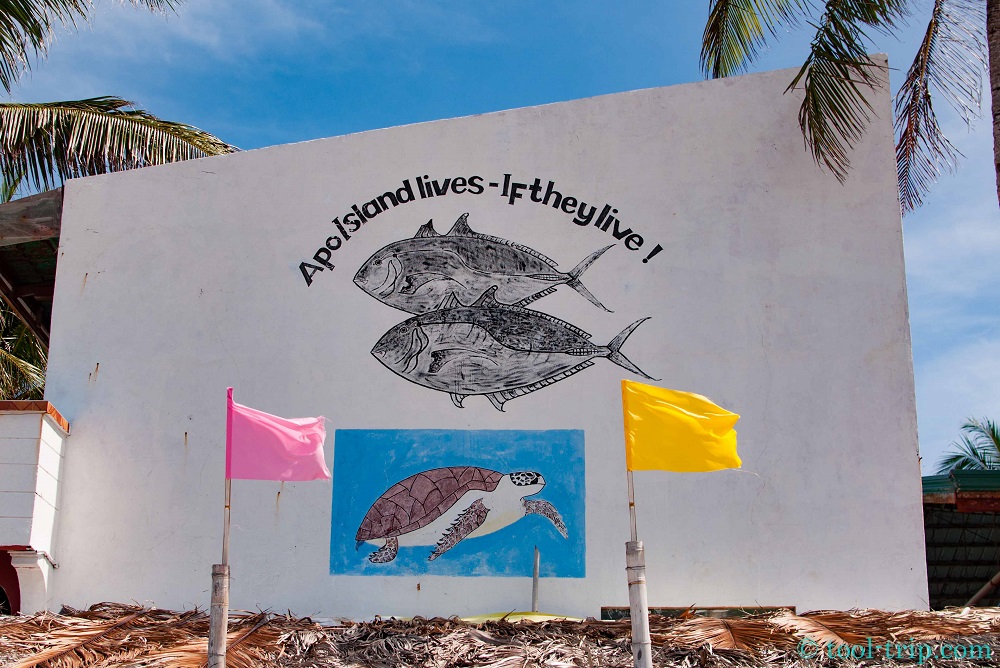 After paying the obligatory tourist environmental fee we followed her to her guesthouse. Basic would be the best word to describe it. It was fine but we thought we ought to check other places just to see what we could get for our money. In the end we stayed at Liberty Lodge right on the beach and the biggest guesthouse on the minuscule island. We had a great room with a sea view for the same price as Mary’s – perfect. 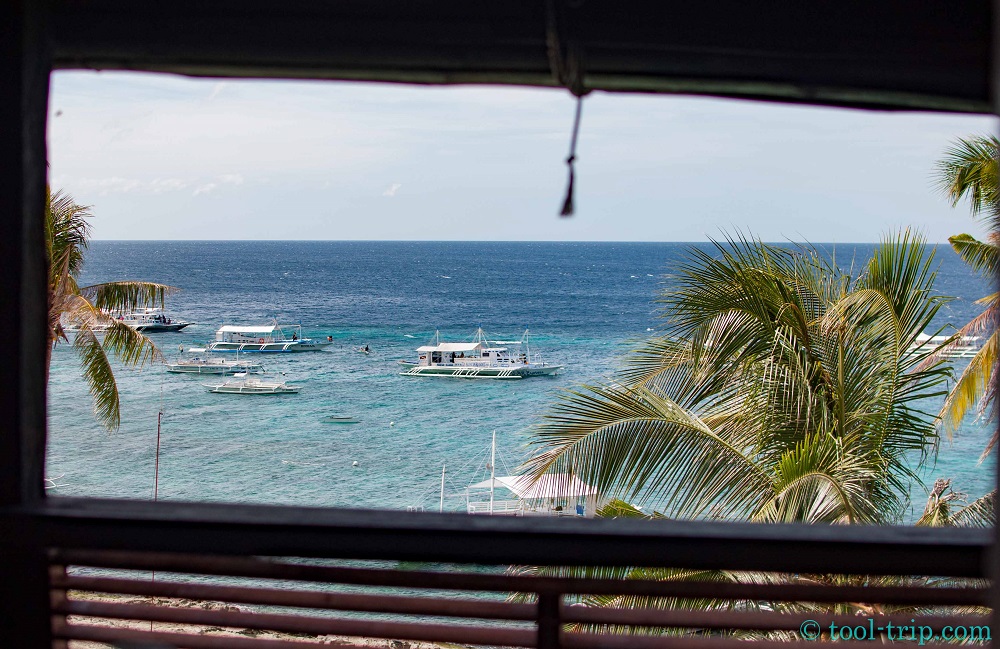 Room with a view

Late afternoon, after an adventurous morning, we decided to go snorkelling in search of the famous Apo Island Turtles. 1 turtle, 2, 3, 4, 5 turtles all in the space of 5 minutes!! The turtles come close to the beach to feed on the abundant algae in the areas.  They didn’t seem the tiniest bit bothered by us being there and continued to just eat and eat. On our first afternoon we saw 5 green turtles and ended up staying in the water for over an hour until freezing cold and fed up of being stung. What made the snorkelling really nice was the lack of other snorkelers. There only ever seemed to be 2 or 3 other people in the water at the same time as us, and always a long way off! 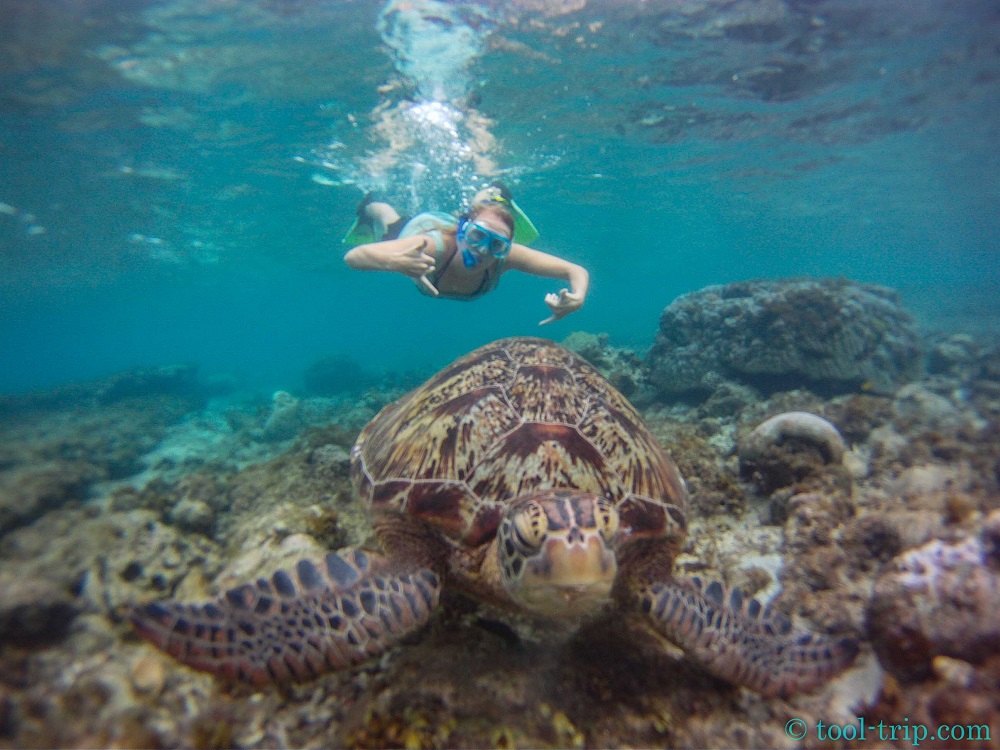 So cool to swim with these chilled out creatures 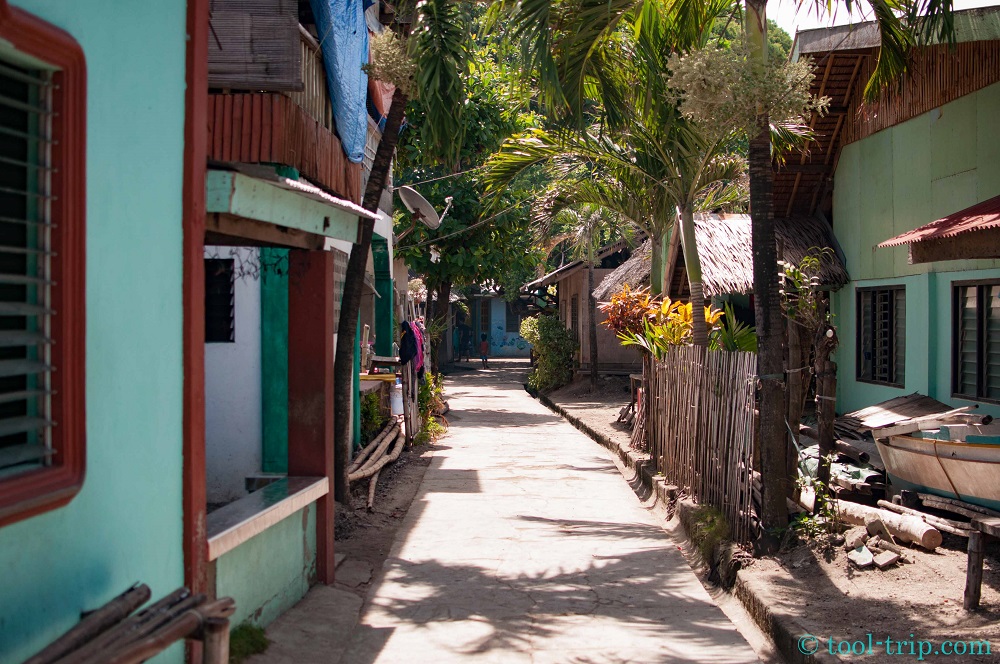 After a standard cold shower, we ventured into the village. The locals were super friendly and the community seemed extremely close. We watched the teenage kids putting up the Christmas lights on the coconut made Christmas tree. As usual, the boys being boys, they didn’t test the lights before putting them up and obviously when switched on, most didn’t work! Certain things are the same no matter where you are in the world! We immediately loved Apo, the people and the turtles of course. 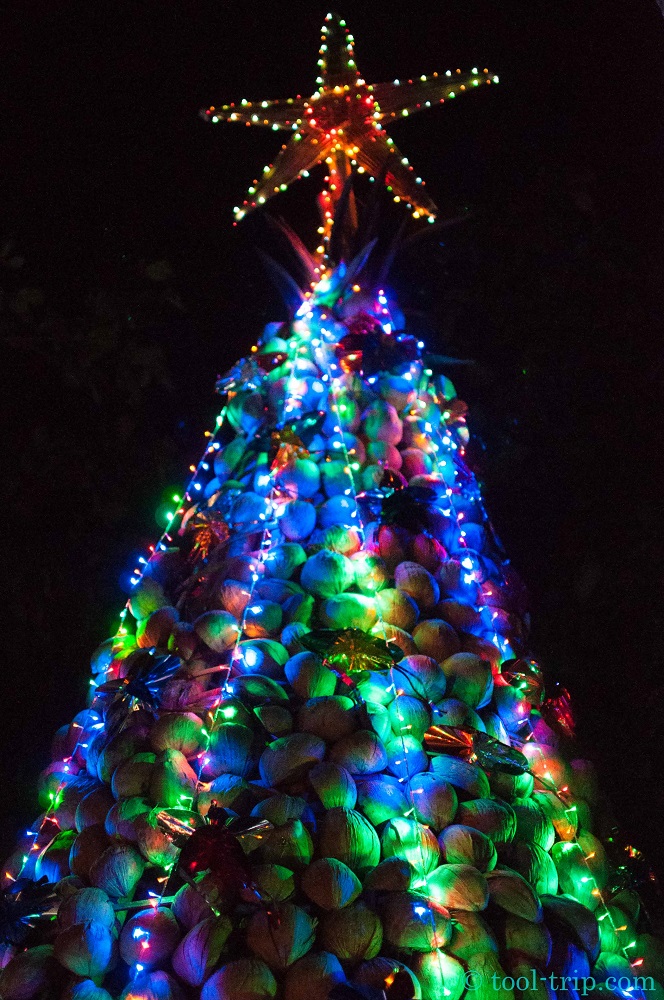 Christmas tree made of coconut shells 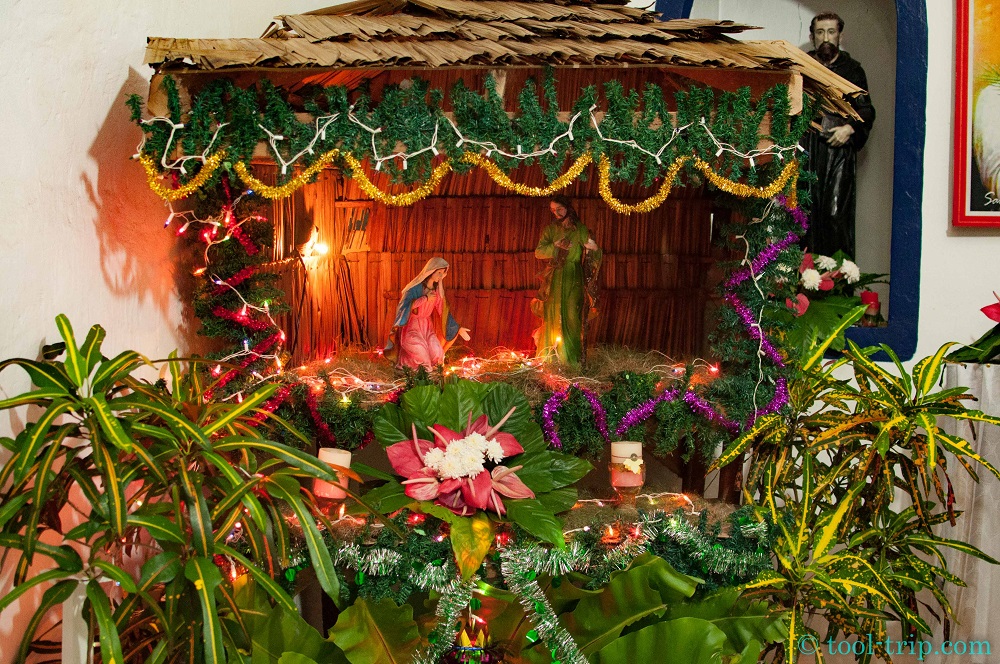 Nativity scene in the local church

We tried to find somewhere to eat the first night other than the rather expense restaurant at our guesthouse. We had hoped to be eating nothing but fish and fruit in the Philippines but unless you are willing to pay a lot for it, it’s not easily available. There were very limited options on Apo.

With no electricity except between 6-10pm there were no/limited local restaurants.

The only ones were in the 3 or 4 bigger guesthouses on the island and you needed to order in advance the majority of the time. We ended up eating a few meat stick kebabs from a local woman before returning to the guesthouse and eating the cheapest thing on the menu! 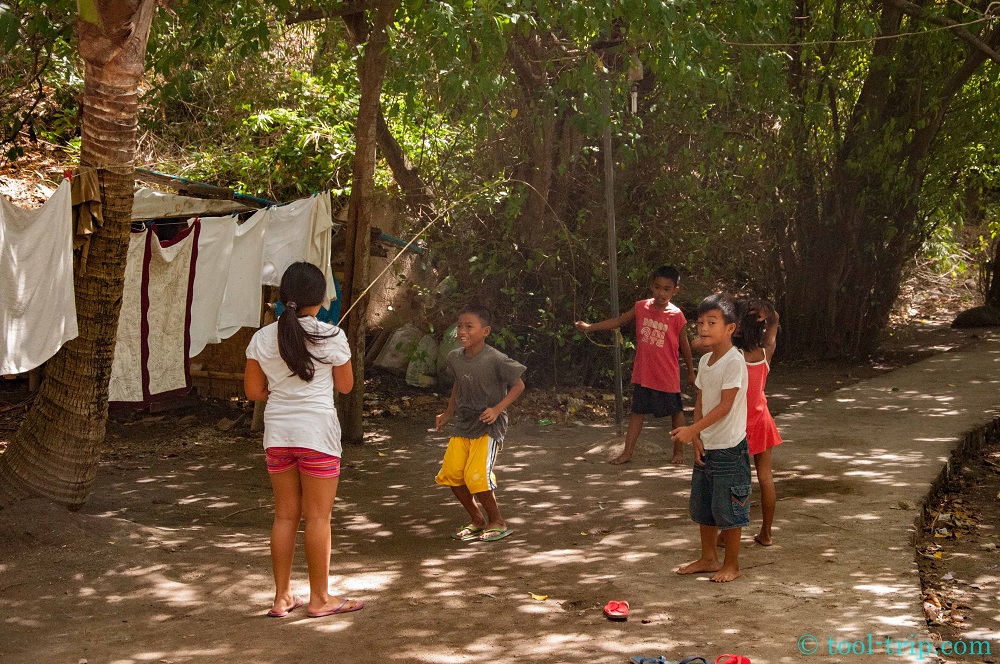 For our first full day on the island we got up early to say hello to our friends the turtles before breakfast. There were so many!! We then decided to go explore the island rather than diving. We’d checked the weather forecast and the days following looked to be better. The island was beautiful, very hilly, and almost completely deserted except for the main village. The views were spectacular and it was good to stretch the legs. South of the island we saw the extent of what Typhoons Sendong in 2011 and Typhoon Pablo in 2012 did to Apo’s southern marine sanctuary = Complete destruction! 99% of coral damage and 50% decline in fish abundance. They were just starting to implement plans for restoration. 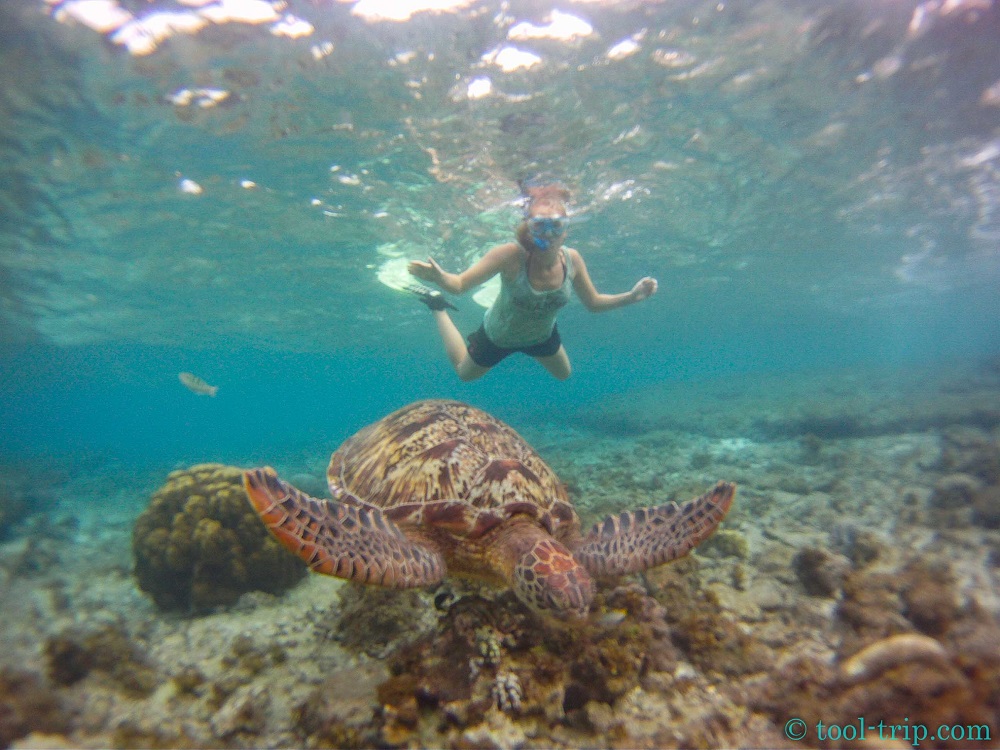 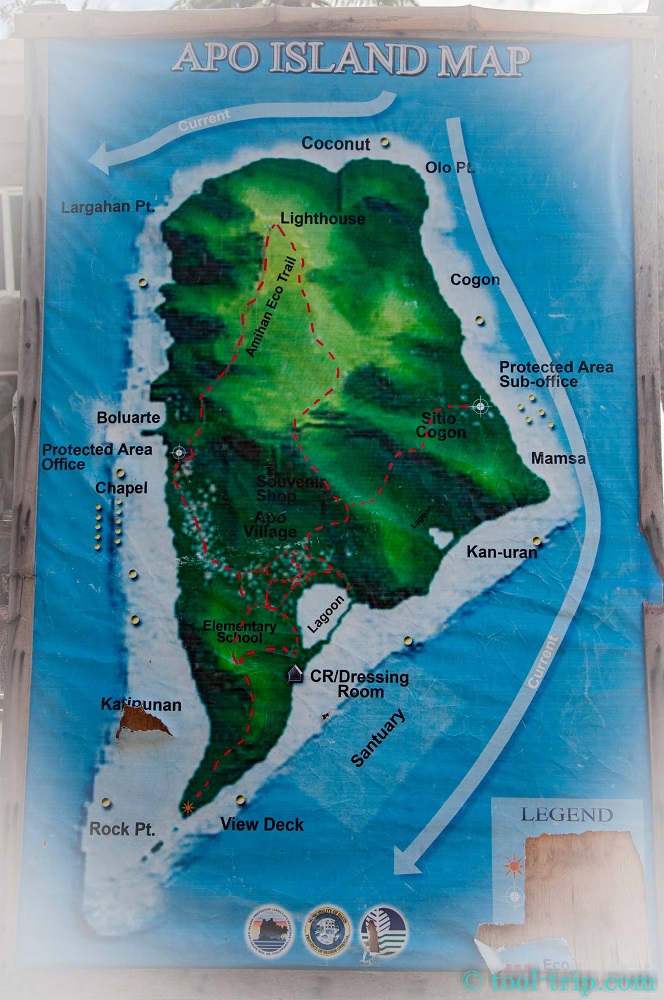 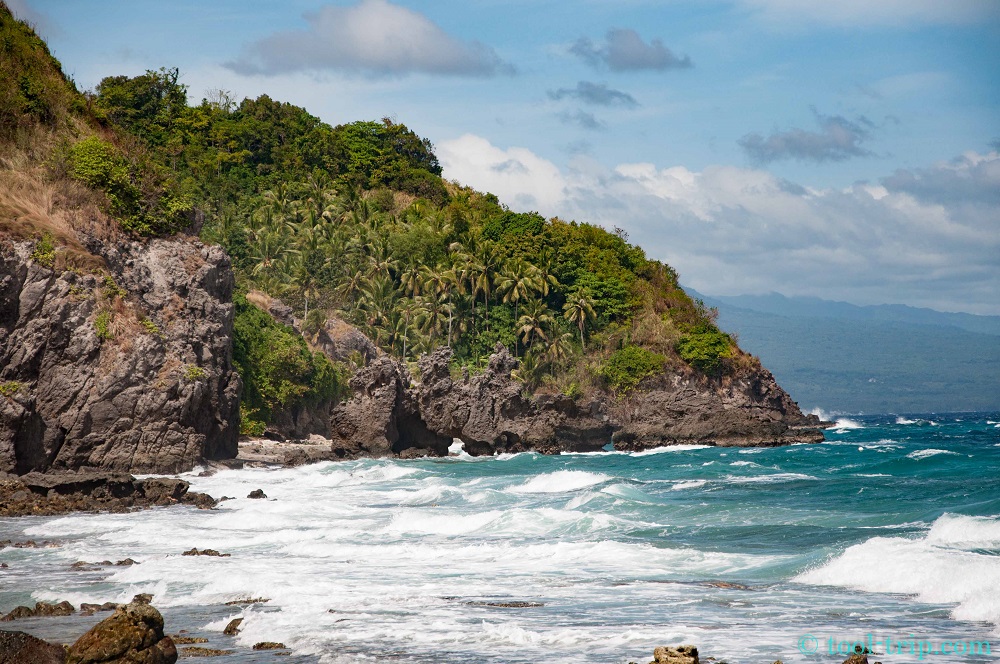 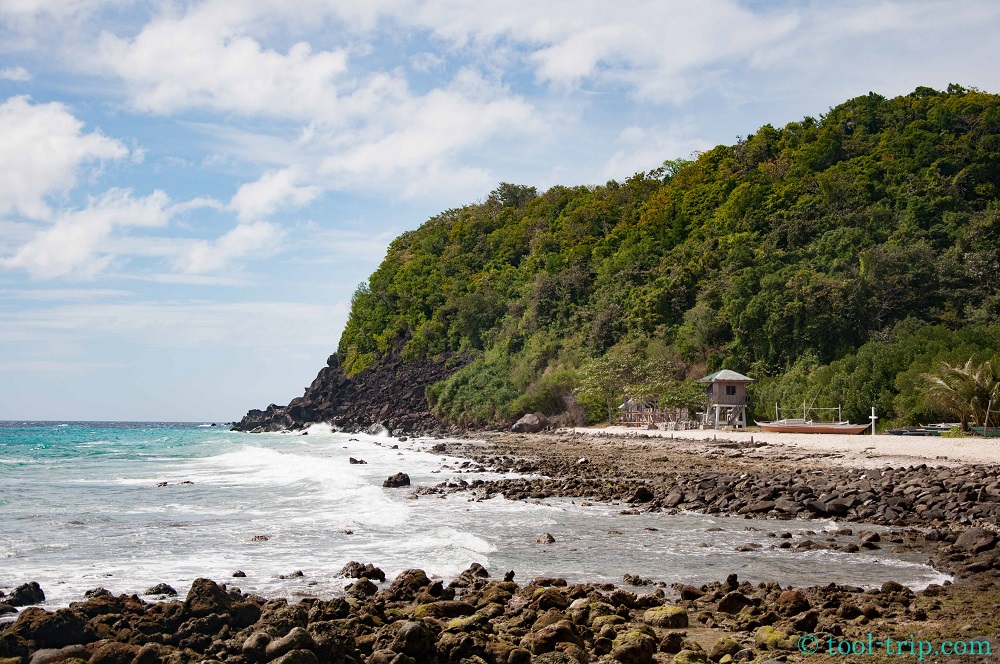 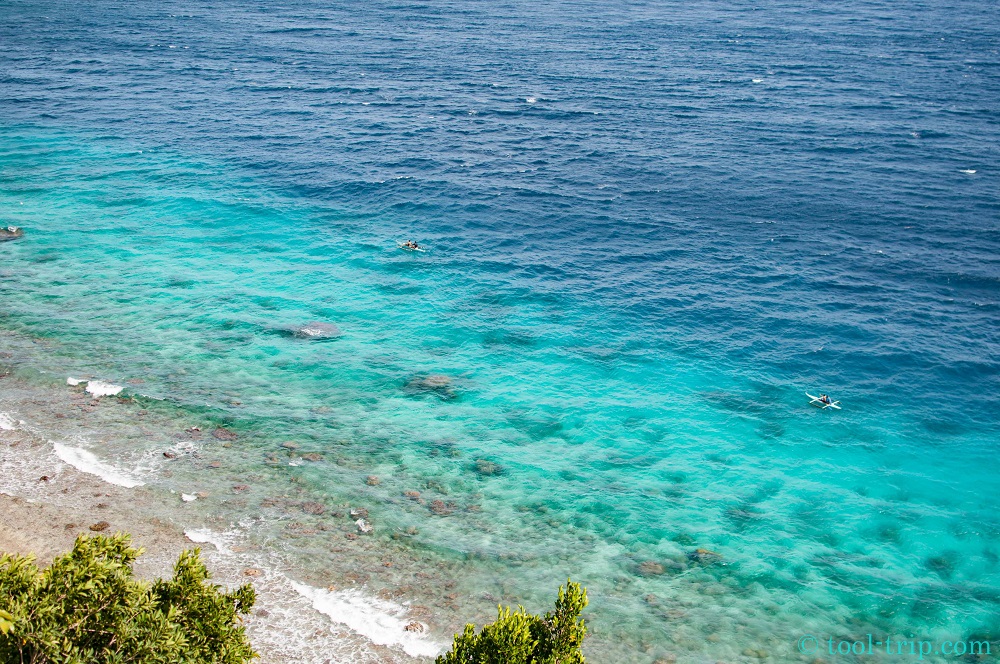 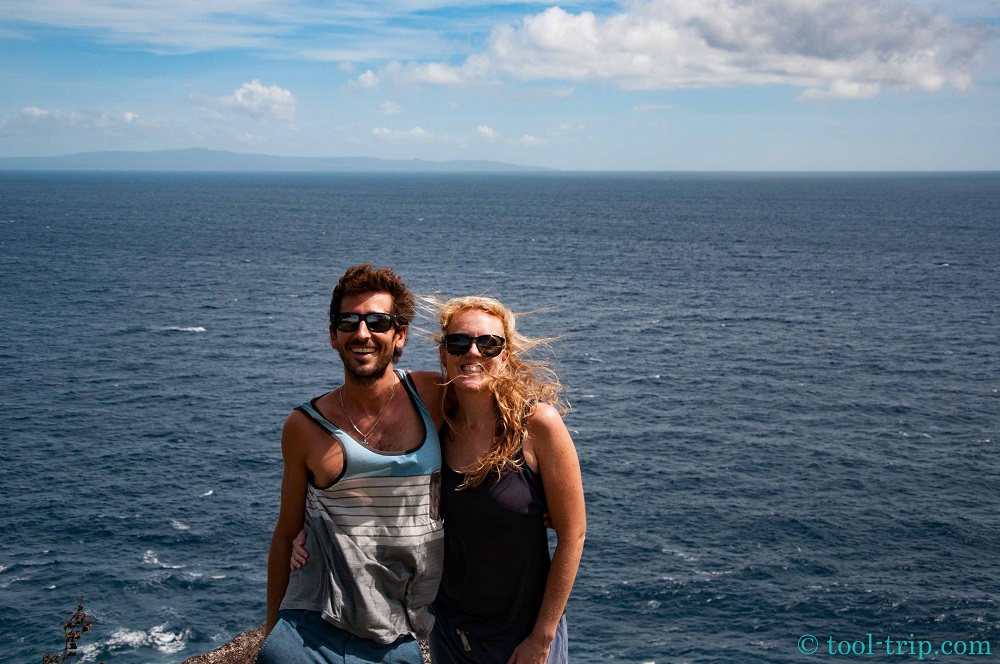 Top of the island! 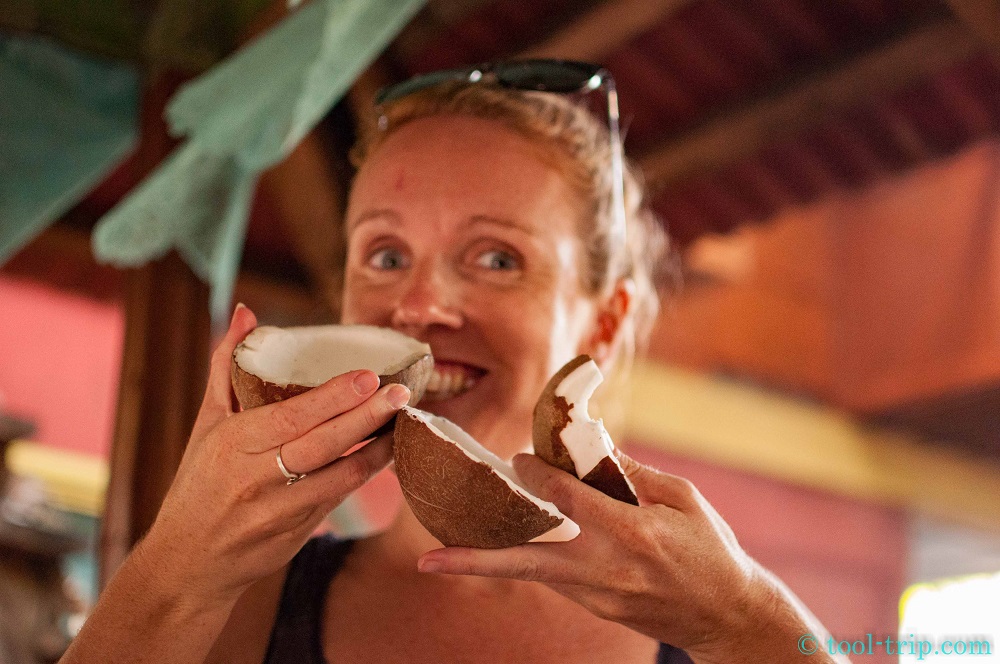 We climbed and crawled up and across to Sunset Point for views across the west and south of the island – beautiful turquoise waters and green rolling hills. We also stumbled across a very small guesthouse called Rhona’s on our walkies. The landlady, we presumed Rhona, was preparing some food and we asked if there was any available for us. She said every day she prepares fresh food and we could just walk in – Perfect. We every last drop of the pork stew, rice, salad, vegetables and water, costing us a whopping 150 pesos. We finished the day snorkelling around the coast and booked our diving for the next morning. 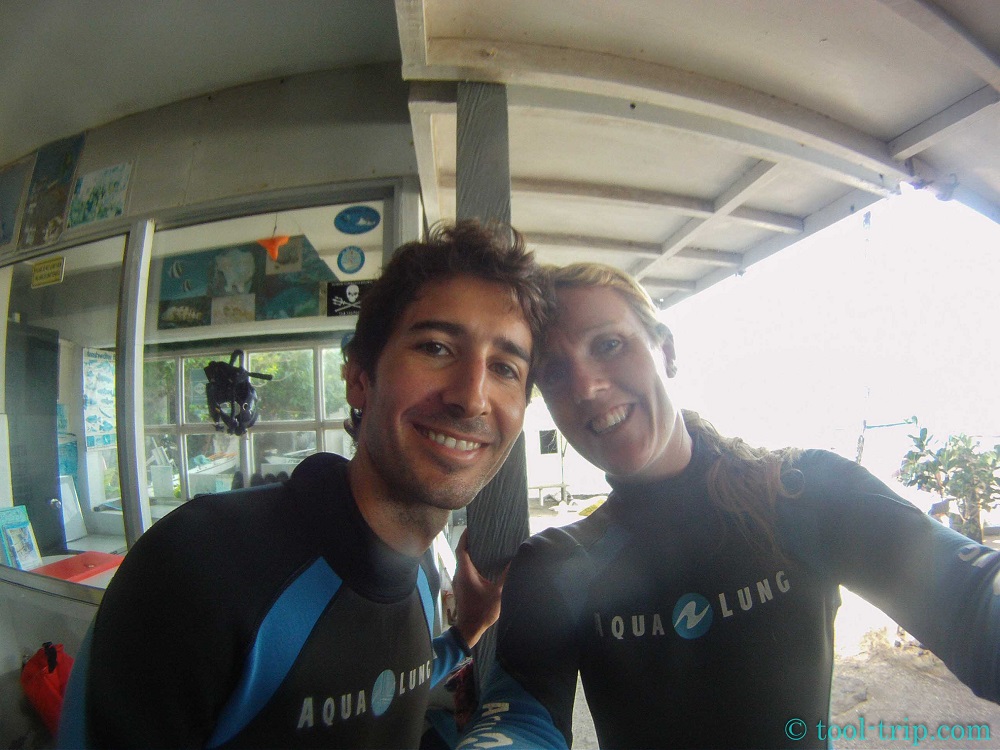 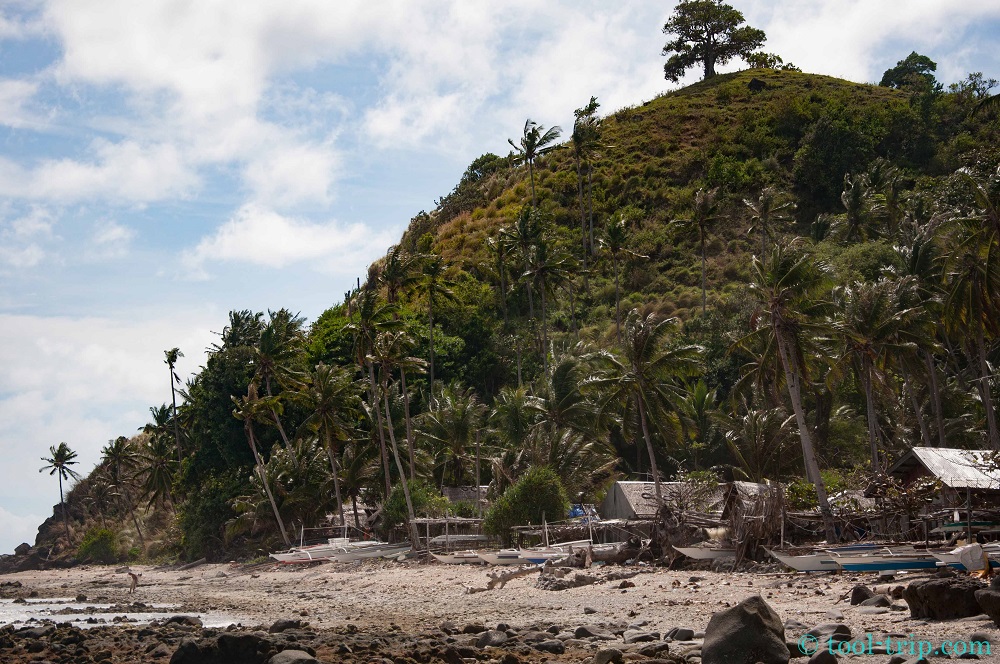 After buying and eating what felt like the whole bakery in Apo village, we went to get kitted up for our morning dive. It was pretty chaotic with a lot of unnecessary people around. Once we had all our kit we headed to the boat and saw we would be diving with 6 others and 2 divemasters. Our dive site for the morning was decided 30 minutes before we left: They chose Cogan, a drift dive to the east of the island. We were so excited! Unfortunately we had only a 10 second dive briefing before we were due to get in the water. No one was body checking except us, we had no idea who we were following out of the two divemasters and the next minute they were yelling us to get in before we drifted too much. I didn’t even have my mask in my hand and I was in the process of putting my fins on. I’m all for getting in the water as quickly as possible but they could have warned us what was going to happen. When we got in the water, the two divemasters and another diver had already started descending, leaving the rest of us wandering where they were. Idiots! Anyway…. once underwater everything was fine. The current was strong and we just drifted along. Unfortunately the visibility unsurprisingly wasn’t good and maybe our expectations were too high but it wasn’t that great. It was ok, but not great. 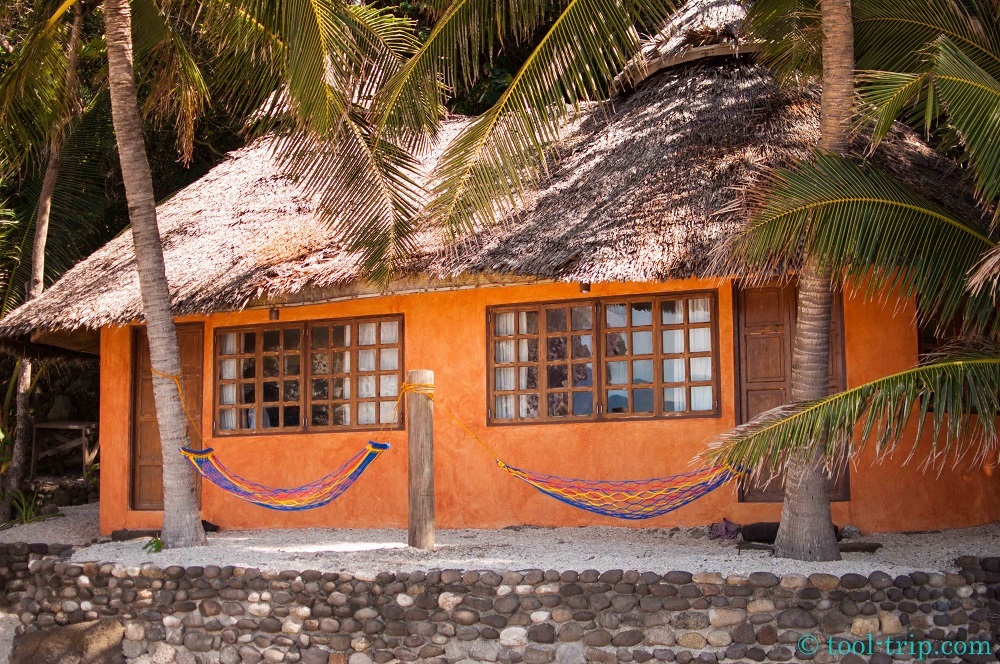 Hotel bungalows in the next cove along from us. Not bad! = Expensive

We decided not to dive in the afternoon and headed out to snorkel in another cove. Incredible! We saw 3 smaller turtles, lots of marine flora and fauna, the colours were beautiful, and the famous gas leaks from the seabed surrounding the island were so cool to see. It made the water look all sparkly! 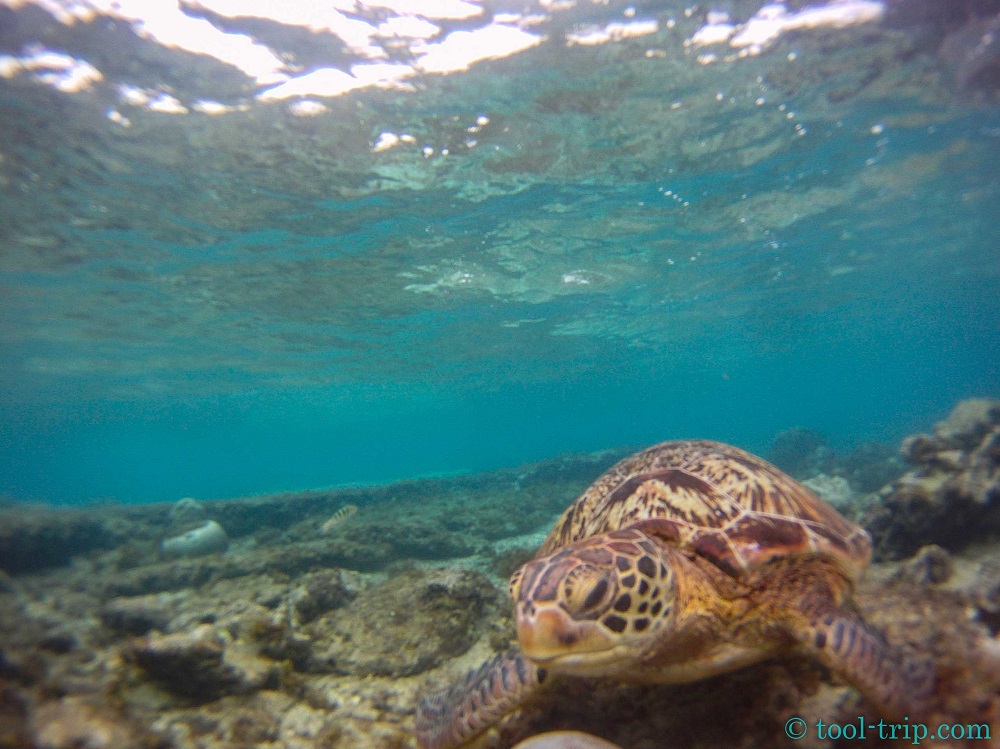 We finished our snorkelling escapade revisiting the greedy green turtles just off the town beach. We saw a record number of 15!!!! It made our whole trip! 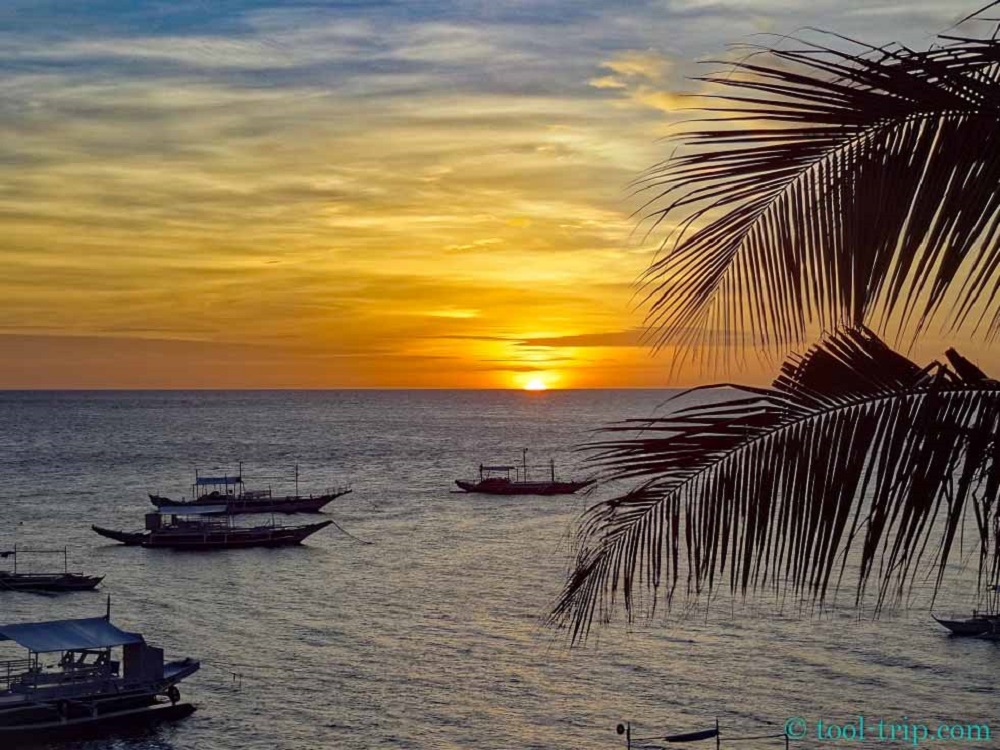 Sunset and a beer

We attempted to organise diving for the following morning before we left at lunchtime, direction Siquijor. We didn’t want to do a drift dive, instead one along the west coast in one of the coral gardens. Trying to ask where they would be diving the next day seemed like asking them to answer a rocket science question. They had no idea and didn’t seem interested in maybe organising themselves and give us an answer. Useless. Eventually we gave up and they still didn’t know the next morning when we got up early especially too ask.

We spent our last night chatting with a lovely Dutch couple, Marleen and Leon and a South African/American couple. We ended up swapping contact details and arranged to meet in Siquijor at some point over Christmas. 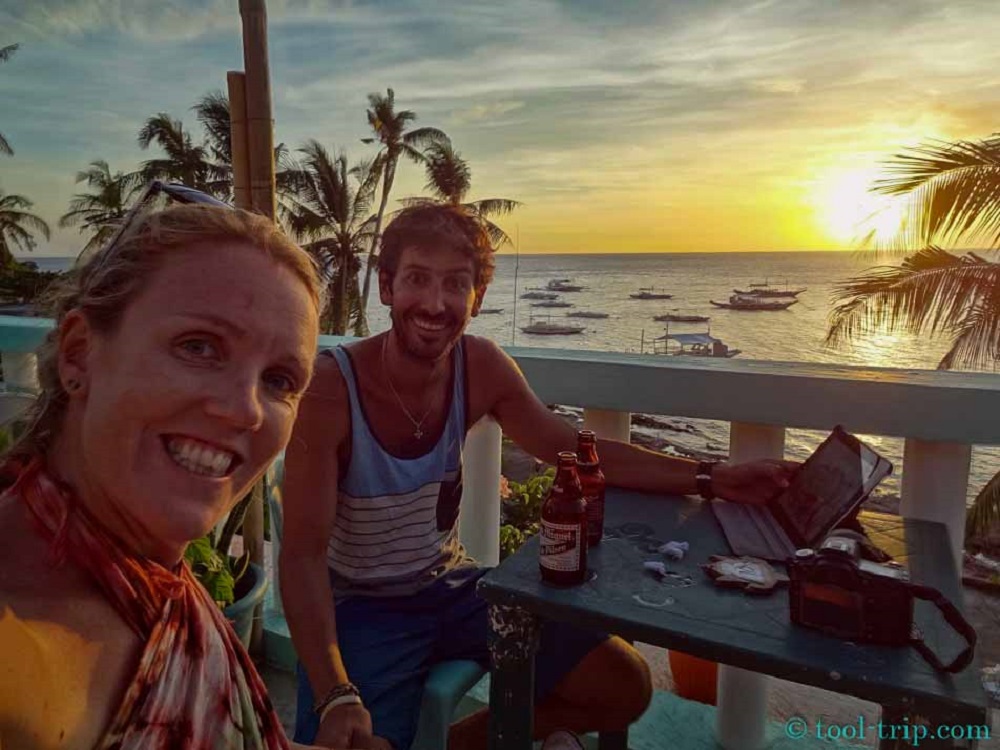 Sunset and a second beer! 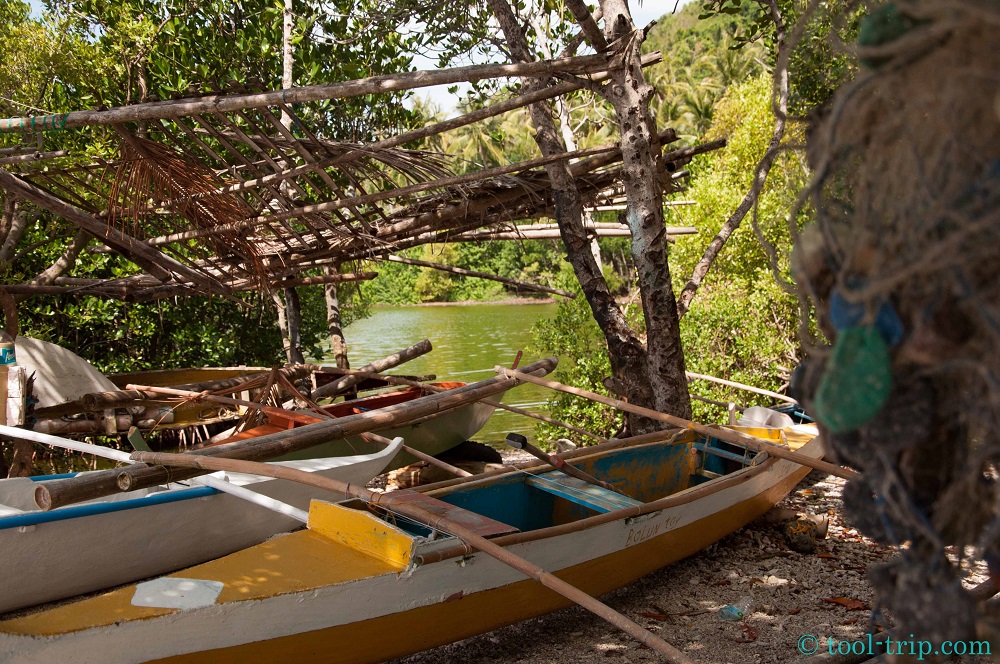 For us the diving was a little disappointing but we’d heard some of the dives we wanted to go on were great. Unfortunately Liberty ‘Paul’s’ Dive couldn’t organise themselves enough to go there. Looking back we really should have tried another dive centre along the beach. 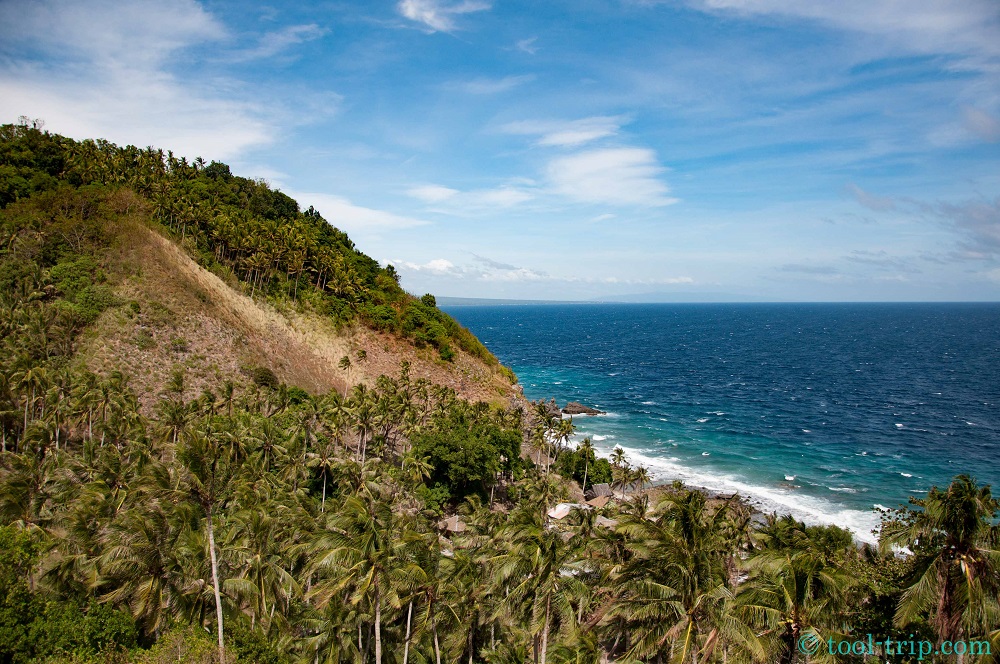 To get to our next island, Siquijor, we took a bangka back across to Malatapay on mainland Negros. This time it was much bigger, the sun was shining, and the water a lot less choppy. We walked to the main road where we took a jeepney to Dumaguete city and caught the fast ferry to Siquijor. There was no torrential rain so the travelling was a little drier this time!

One thought on “Turtles galore in Apo”