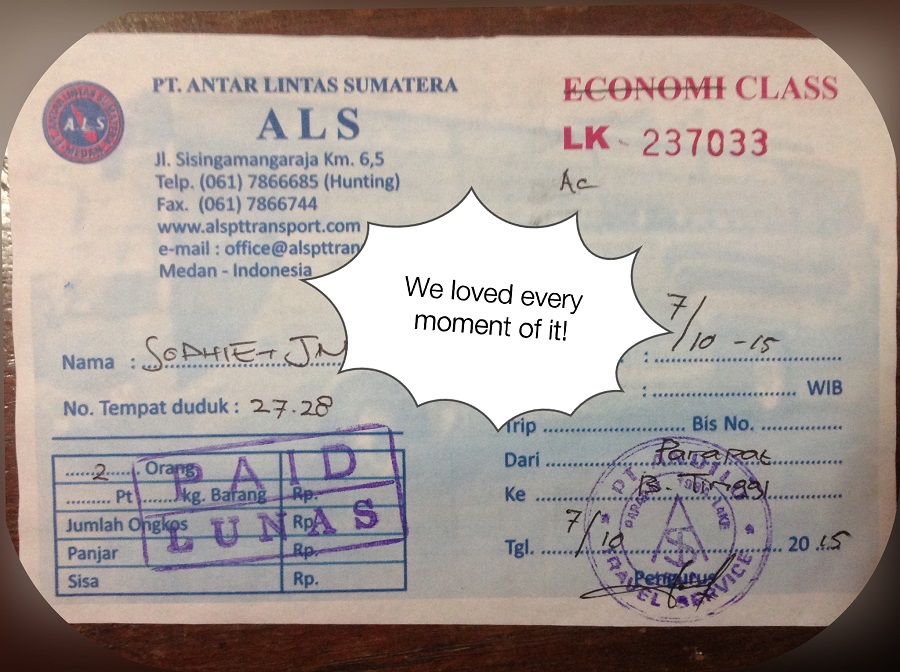 Our ticket for the epic 17 hour bus trip from Parapat to Bukittinggi.

To get to our next stop Bukittinggi, a town situated between the beautiful Harau Valley and Lake Maninjau, we were required to take a 17 hour bus journey across northern Sumatra. It was during this epic and long journey that we crossed the equator by land. This is the type of thing that would normally excite me! However, after 17 hours on a noisy, smelly and insect infested bus it was all a bit hazy. It actually wasn’t that bad it just felt like it at the time.

It’s not the first time JM and I have crossed the equator but a first on the road. JM crossed the equator on a boat in the Atlantic Ocean numerous times. It was during the first crossing that he had a lovely initiation ceremony – traditional for seafarers in order to please Neptune, God of the oceans. When I say ‘lovely ceremony’ I mean a wheelie bin full of eggs, flour and other yummy foods chucked over his head on deck. We didn’t quite celebrate in the same way this time but the journey was definitely unforgettable.

We had had this journey in our minds for a while. The quickest, cheapest and easiest way to head south in Sumatra- although it really wasn’t quick or easy but compared to the other options it was the better deal! 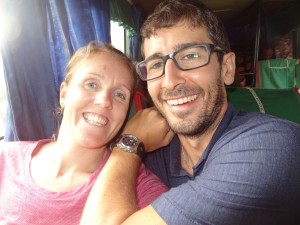 After a great few days in Lake Toba we left the island to a cataclysmic deluge. The rain was so heavy we couldn’t see more than 10m in front of us. We were soaked through and looked like we’d swam back to Parapat rather than undercover on a boat. We had a 3 hour wait before our bus to Bukkitinggi at 5pm was due (so we could book a ticket and good seat before anyone else as advised by the guys working at the hostel) We weren’t on a lucky run unfortunately, soaked through and wet we went to the ticket office to buy our tickets where we were told our bus was already FULL!!! (it was full coming from Medan the capital of Sumatra) and there was only one a day direct to Bukittinggi. Pretty pissed off with the bad luck and the thought of wasting a day and night in rainy Parapat the bus organiser proposed taking another bus arriving straight away so no waiting around and heading to Padang via Bukittiggi. The only difference was the bus was apparently a little more run down with no toilet but they would stop regularly for breaks. The price was much less than we anticipated and we decided to go for it. 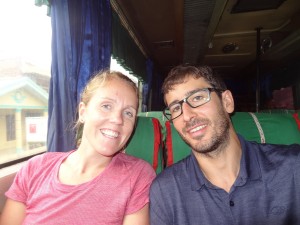 +1 hour. Everything is going ok!

When we asked how long this bus journey would take we were told between 14 and 18 hours…! a bit of a difference in times, but apparently it all depended on weather conditions, traffic and also the conditions of the road.

The bus arrived shortly after. Our first thoughts weren’t great. It looked like a bus which had passed its last MOT 10 years ago along with the last time it was cleaned! 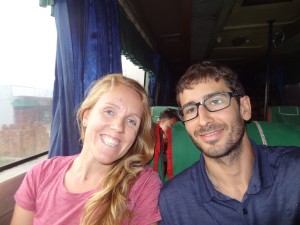 Because we caught an earlier bus we were lucky enough to take advantage of the daylight and see some of the stunning Sumatran countryside. Typically Indonesian; paddy fields, mountains, palm trees, thick jungle like vegetation, smiling locals, happy water buffalos and other wildlife. It was really nice to see.

Our route took us along the main Sumatran motorway. Some people might think yes!!! A straight, direct, 2/3 lanes, fast going road. I can only describe it as a village lane just about wide enough for 2 fiat 500s let alone coaches and huge trucks! Unbelievable that this is the island’s best and busiest transport route! 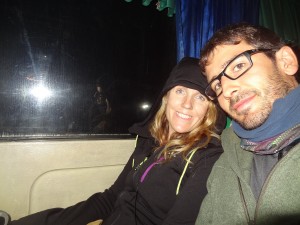 Although extremely busy, bumpy and noisy the bus kept moving at a steady rate, except that is for an hour where we moved only 500m down a steep hillside with ridiculous hairpin turns, trying to pass 8 coaches, 20 trucks and 50 odd cars in the pitch black at midnight! The bus team and all the other drivers of large vehicles in Sumatra require spotters especially for situation like this. The spotters work with other spotters and drivers to guide the vehicles past each other to avoid any problems. A slow process but they have done in 100s of times and there were no accidents thankfully – On our coach there were 2 drivers and 2 spotters. 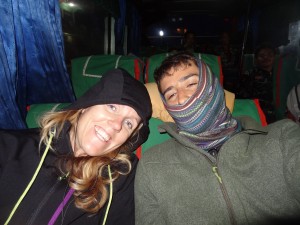 So how would be the easiest way to describe this bus journey to you…? 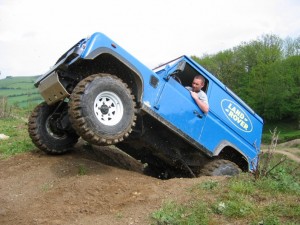 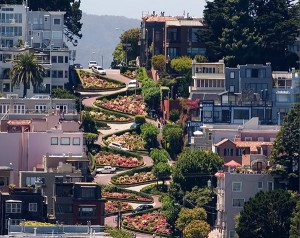 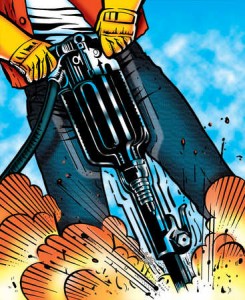 Inside the ambiance wasn’t too bad. No ridiculously loud 110dB music like we experienced inside the local Oplet taxi buses. No one was sitting, standing or lying in the aisles and no one was travel sick which was pretty impressive considering the movement of the bus. The motor of the AC, located just above our heads seemed to have the same noise as a plane taking off. No leg space as usual because the buses are designed for Indonesians and no room for our bags that had to go by our feet. This is normally fine because then we have our bag with us at all times but then there was no room for our feet! We ended up waking up with bruised knees and shins! We also noticed after a group of guys left the bus at around 1am leaving crumbs of food everywhere, that miniature cockroach type bugs appeared out of the small cracks and holes of the bus and were running all over their seats. Gross! For the rest of the trip I was scratching like hell, checking our seats every 20 minutes and I tried not to touch the side of the bus too much where it looked like they were hiding. I didn’t get much sleep after that! Finally tiredness and AC always leads to freezing temperatures which we were prepared for. We ended up wearing 2 jumpers, a hat, scarf and thick socks even though it was 35 degrees and 85% humidity outside. 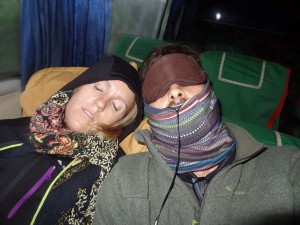 For the rest of the journey everything went smoothly, stops for fuel (and a wee), for praying at a mosque along the way 4:30am for 45 minutes, repairing the windscreen wipers 4 times, and eating of course. We didn’t expect to be stopping for food we just expected everyone to bring a packed lunch/dinner and breakfast! Instead they stopped off twice. Once for dinner at 6pm and once for breakfast 3am. 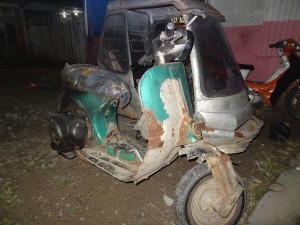 JM happy with the motor vehicles by the restaurant. Old school vespa!

We were unorganised and had nothing but crisps and cookies. We got off the bus and followed the others to pick something for dinner. No one spoke a word of English and it was all pretty disorganised but the norm for them. We decided to get just 1 plate between 2 and chose what looked like chicken in a sauce with rice but we had no idea. It was fine until we burnt all our tasted buds in one mouthful. It was ridiculously spicy. Our eyes were watering, I started hiccupping and our mouths were on fire. 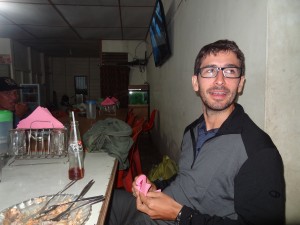 Unfortunately the water provided didn’t look the freshest. Desperate for a drink to soothe the mouth I chose 2 bottles of something which looked like cola but tasted nothing like it. We still don’t know what it was! We carried on eating the rice only and hoped the spiciness wouldn’t cause any belly problems for the next 10 hours on a bus with no toilets! The eating stop at 3am passed us in a daze. Although it was pretty funny watching 30 guys who we thought were all asleep jumps out of their seats and eat like crazy at this time of the day, we dozed on the bus as the engine and AC were switched off. Silence for 45 minutes!

We finally arrive in Bukittinggi around 8am; we took 17 hours to do 500kms. 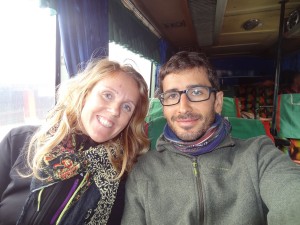 Just after dawn we passed the equator and felt very proud to have survived the trip. A funny memory that we’ll remember for a long time! 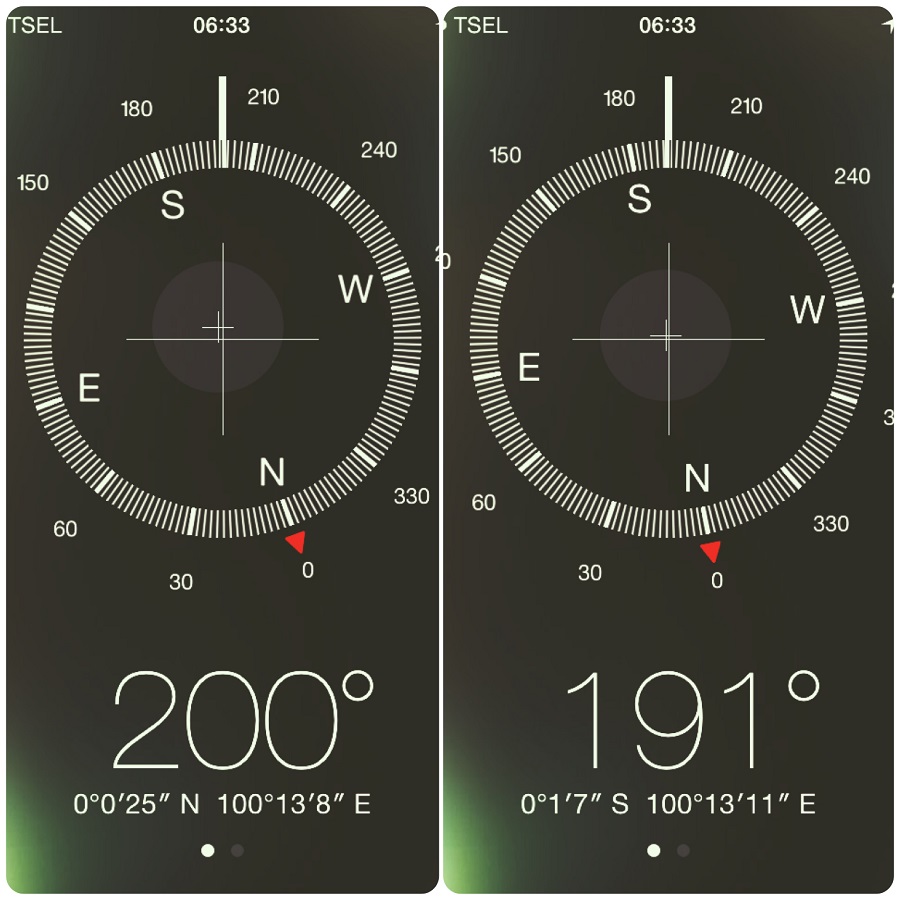