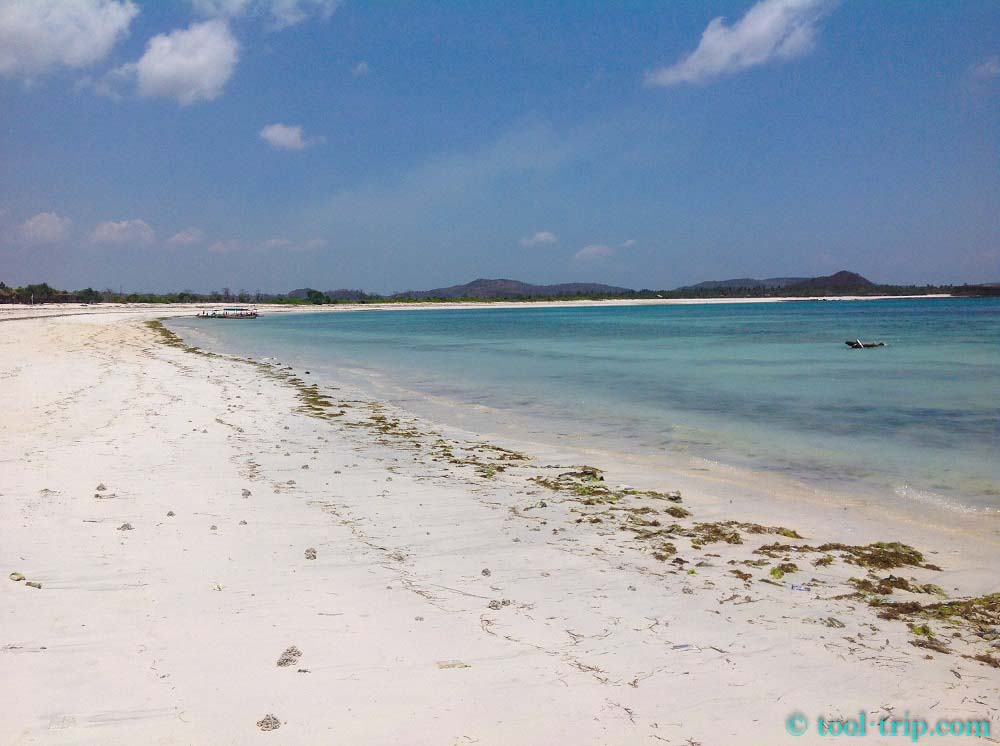 Even though we had a great time in Bali we were definitely ready to move on – Lombok was calling! 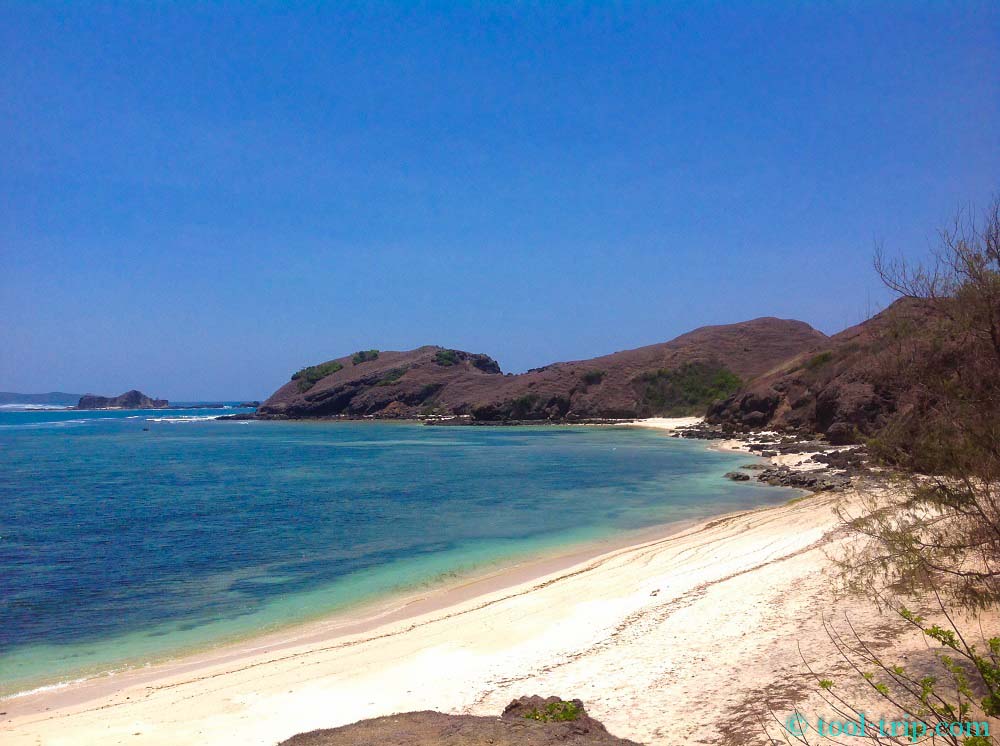 Never straight forward at an airport!

As per usual we had a little issue regarding our flight. The morning we were due to fly we awoke to grey skies and a thin layer of ash everywhere. Gunung Rinjani in Lombok had decided to start smoking and as a result both Denpasar airport and Lombok airport were closed! Typically in Indonesia finding out information is always a little tricky. In this case there was no live information on the internet showing the airport was closed, no email from our airline and nothing on their website.

Ask 5 people on the street and they all said 5 different things.

Luckily we had seen a post from JM’s Aunt on Facebook saying her flight was cancelled because of the airport closure.

We decided to not even try the airport and headed straight to the slow ferry from Padang Bai direction Lombok. To our surprise the price was ridiculously cheap. Had we known this before we would have taken this route in the first place (We’d investigated boats but there wasn’t much info on the internet and the boats that did come up were crazy expensive!)

So from Ubud, Bali we took 3 local buses and a 6 hour long ferry journey to reach the Island of Lombok.

Our main priority in Lombok was to arrange and book the famous Lombok – Komodo – Flores 4 days, 3 nights boat trip. Something we had both wanted to do for a long time! After arriving in the port of Lembar we took a shared private car with another couple to Sengiggi a small tourist mecca where we could book our trip and be based for a few days if needed.

The reason why this trip is famous is mainly due to the sturdiness (or lack of!) of the boats and consequently the two unfortunate sinkings in the last 10 years. Don’t worry mum and dad! Plus the very cramped and basic living conditions and lack of food! If you read tripadvisor the boat companies running these trips don’t have the best reviews (at all!) however if you read travellers blogs they all loved it!!!! Because of all the negativity we did a huge amount of research into the best company to go with, what should be a good price and to see what should and should not be included.

At the agency we were proposed 3 tours all following a similar route and all varying prices. We chose Wanua Adventures because that was the company most people were positive about in their blogs. The problem however, was it didn’t start until Saturday and it was only Wednesday night. 2days extra in Lombok was not a problem but we’d hoped to do the boat trip ASAP then spend more time in Flores after. The other trips started the next day but we didn’t feel the love for what was being offered so we stuck to our original plan Wanua Adventures.

In the meantime our negotiations were up to expert levels and we managed to get free accommodation above the agency (mosquito infested room with a mattress on the floor…! Think of the budget, think of the budget!) for a night and a free scooter for the next day! Result!!

After a pretty rubbish sleep and a huge bout of Ubud guesthouse withdrawal symptoms (Ambengan Guesthouse was amazing!) we decided to get on the scooter and head to the South coast of Lombok to the small town of Kuta. 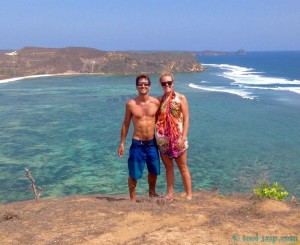 We had only heard good things about it so we wanted to see for ourselves. After 1 and half hours of scooter riding and 4 lungs filling with ash (Rinjani was still puffing!) we arrived to bay, after bay, after bay, of white sand beaches and turquoise waters. 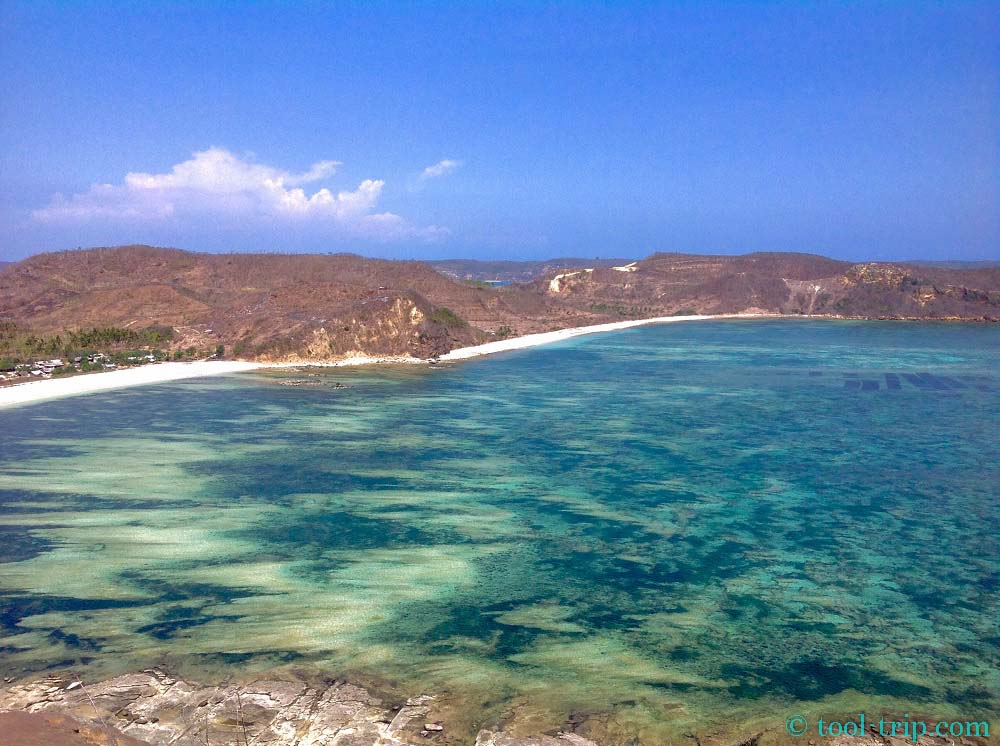 Stunning- and to make it even better no one! We spent the rest of the day poodling around, visiting beaches such as the amazing Tanjung Aan, climbing headlands and visiting the cool fishing village and surf mecca of Gerupuk. 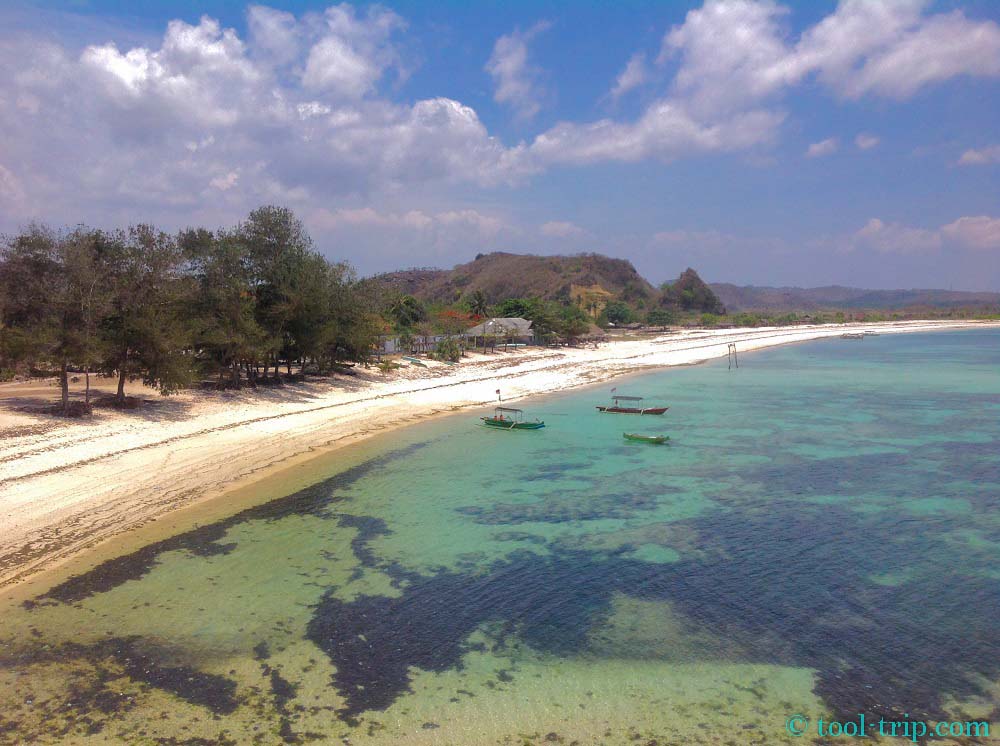 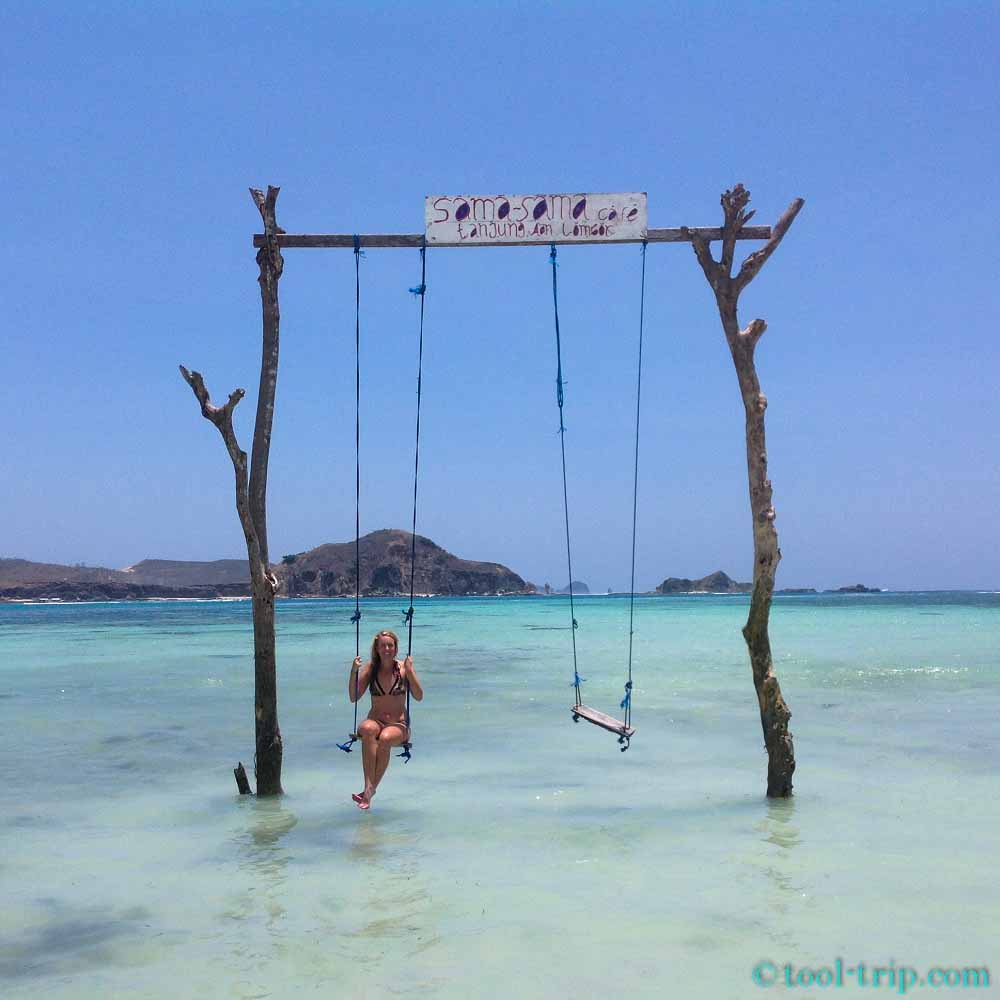 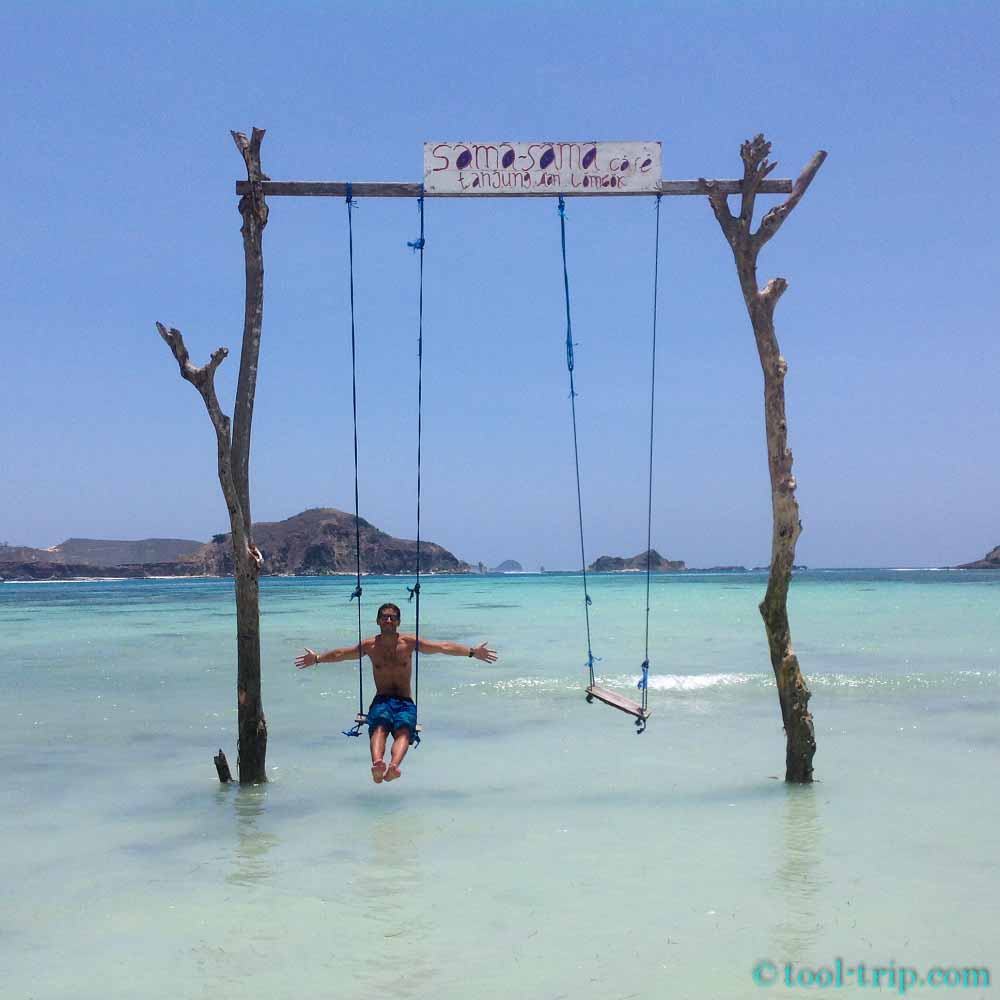 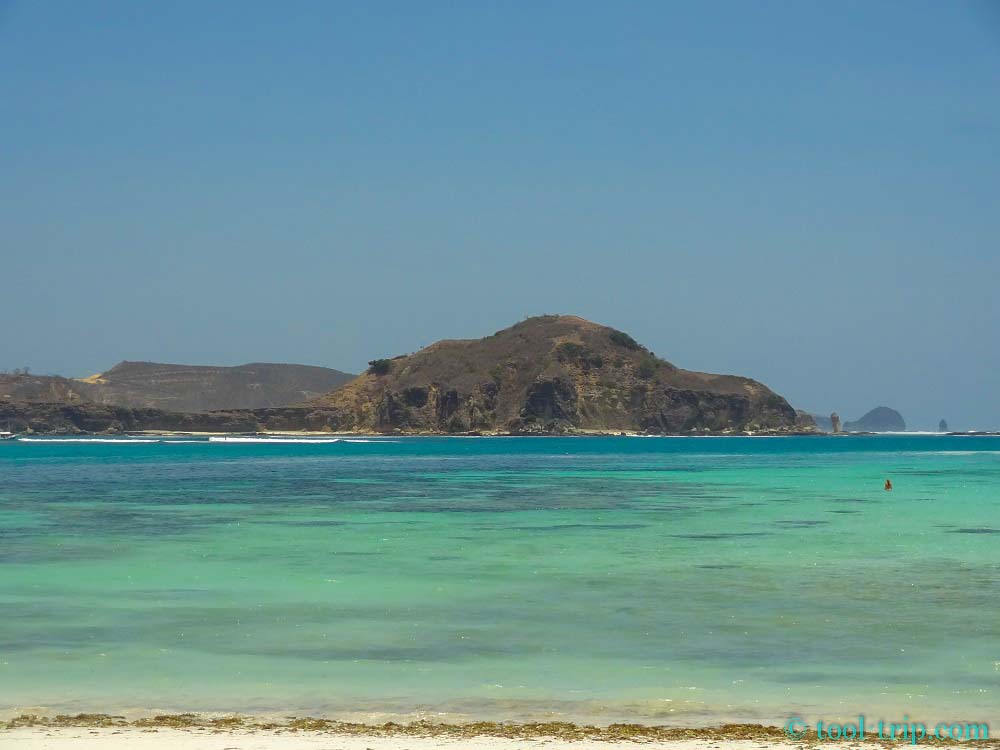 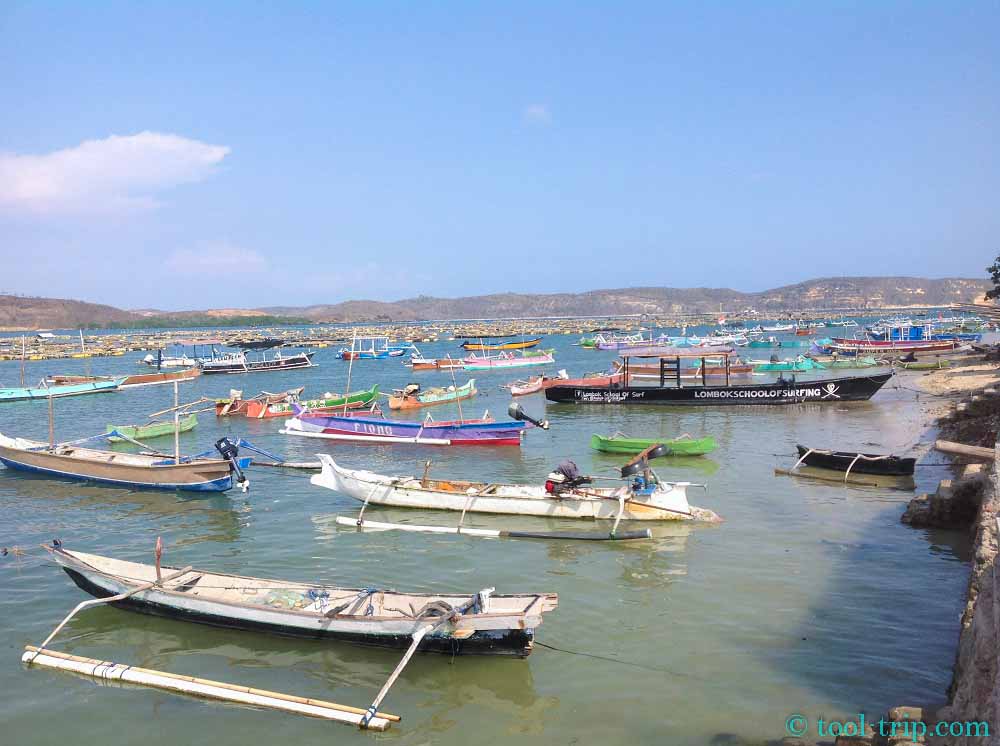 On our return to Sengiggi we moved to find cheap accommodation at a small guesthouse called Pondok Shinta. Don’t stay there! It was one of the few places that were cheap in the area, ideally located and breakfast was included. However you get what you pay for! Our first night we had no water (apparently the whole town was out) When we did have water our bathroom light would cut out after 2 minutes and on our final second night there was no electricity! Normally this isn’t a problem we can wear our head torches but it was so ridiculously hot all day and night that we desperately wanted out fan to work. I took to drastic messages and when and found an atm cubicle where AC was super powerful!!! 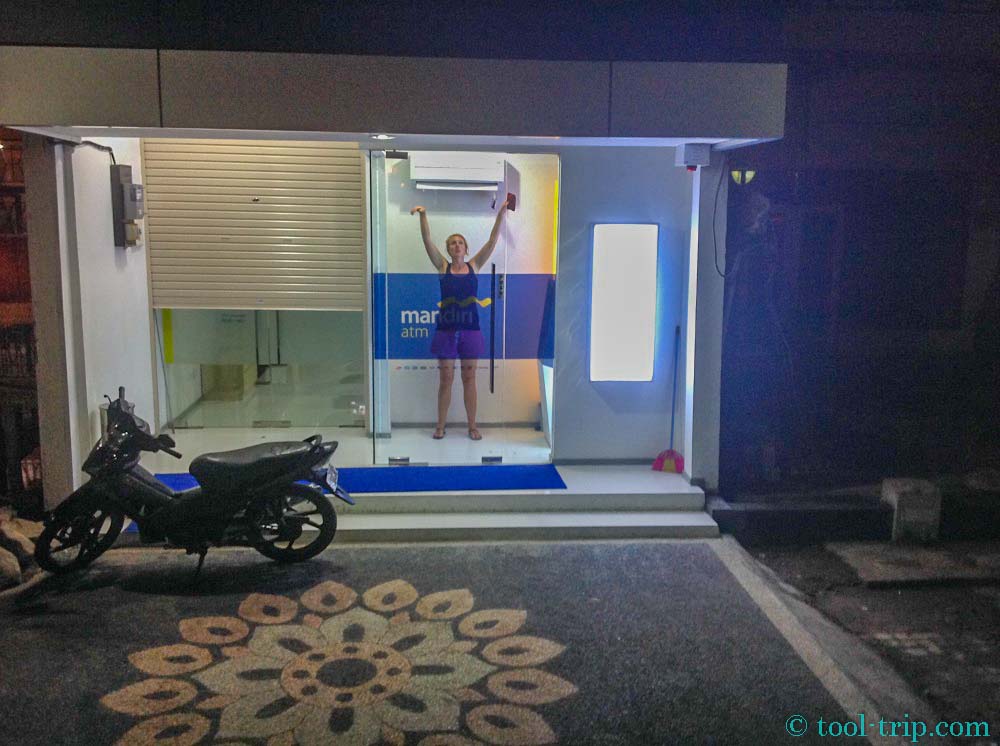 Finally we discovered a termite’s nest being built behind our door. Lovely! Oh how I miss Ubud! 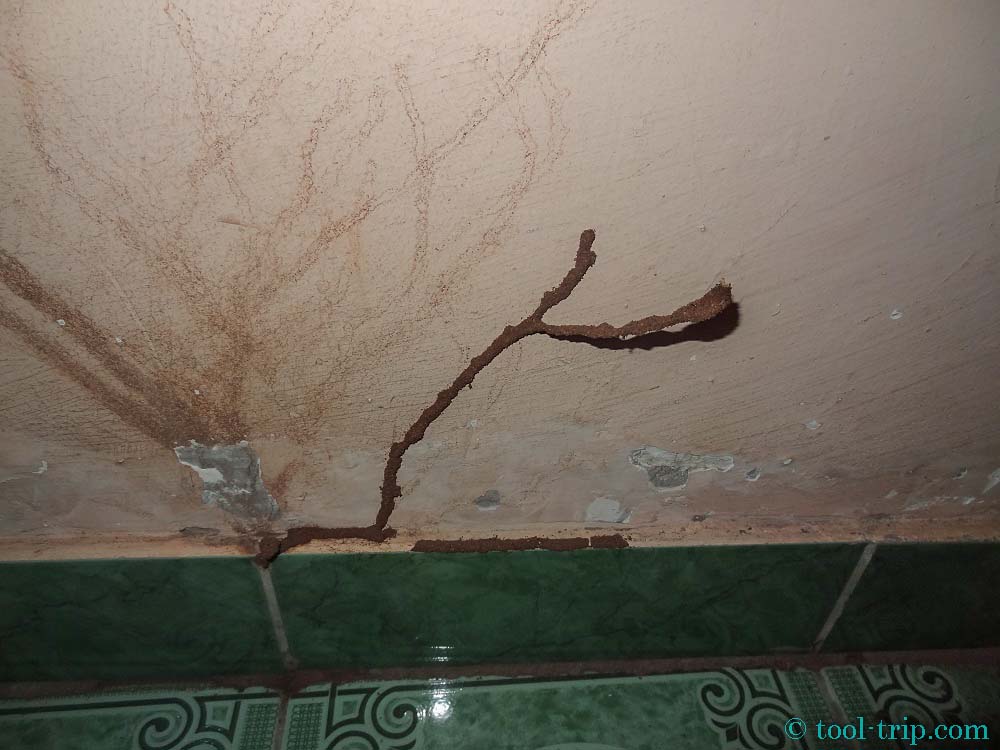 Think there’s been a few more nests before aswell!

On our last full day in Lombok we decided to explore the area around Sengiggi as we had no scooter and wanted to stay cheap and local.

We managed to jump into the back of a bemo and asked for Maliumbu Beach, recommended by a local in a small bar across from our hostel the night before. Apparently there’s no one, it’s beautiful, and a must see. 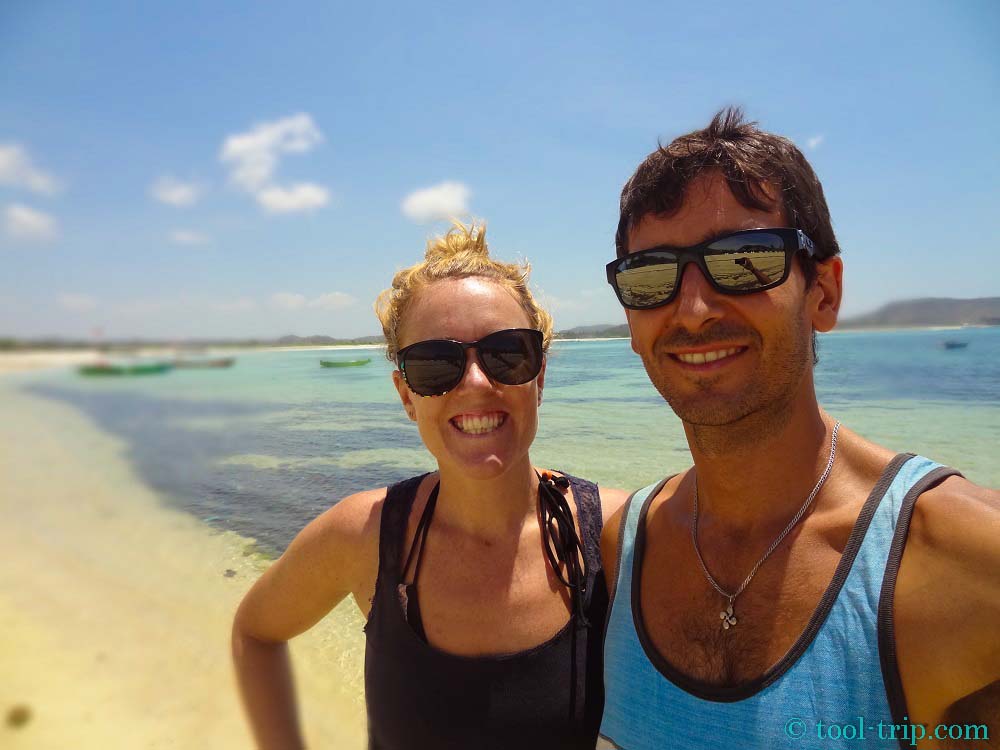 After a little detour and helping with the food deliveries of some locals in a nearby village we arrived to the stunning setting of Maliumbu beach…. Or so we thought. As we got closer and on further inspection we discovered a huge drilling truck involved in the construction of a supersize hotel on the other side of the beach, the swimming was almost impossible due to the rock outcrops and strong currents, the water didn’t look at its cleanest and the beach was covered in litter! A bit disappointing considering it looked like paradise from a far and it was deserted! We decided to walk to the next beach. After 40 minutes of walking in 40 degrees heat we arrived to a stunning beach! Turquoise water and a white sandy beach swarming with small fishing vessels and small warungs offering fresh fish. We headed down to the water and again more rubbish and dirty water! Not loving the dirtiness and smell we slowly made our way back to town after lunch, bumping into a couple who were doing the same and shared a taxi back. 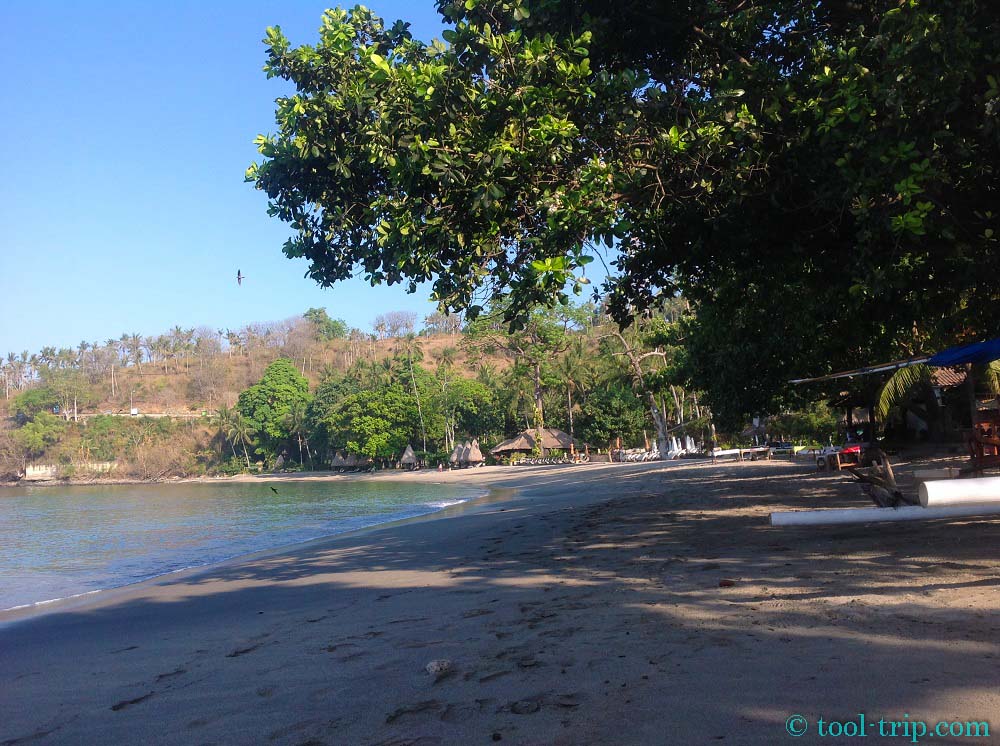 All along the west coast of Lombok the beaches are stunning and some of the most beautiful in Indonesia but unfortunately they are doing nothing to keep them clean or educate the locals on protecting the local reefs (the only clean beaches are in front of the hotels.) All money is pumped into new big luxury hotels which remain empty most of the year because the area is already saturated with them or, the Gili islands, a tourist mecca north west of the mainland which are very nice but they are so small in comparison to the rest Lombok. They really need to get their priorities straight because the island is absolutely incredible. Rant over……

After two full fun packed days in Lombok we were looking forward to moving on. Next time we plan to visit the Gili islands but to the south west of Lombok (not Gili Trawangan, Meno and Air in the North West) We heard they were paradise and untouched. Next time…Next Time.

Now it’s time for some Komodo dragons and MANTAS!!!