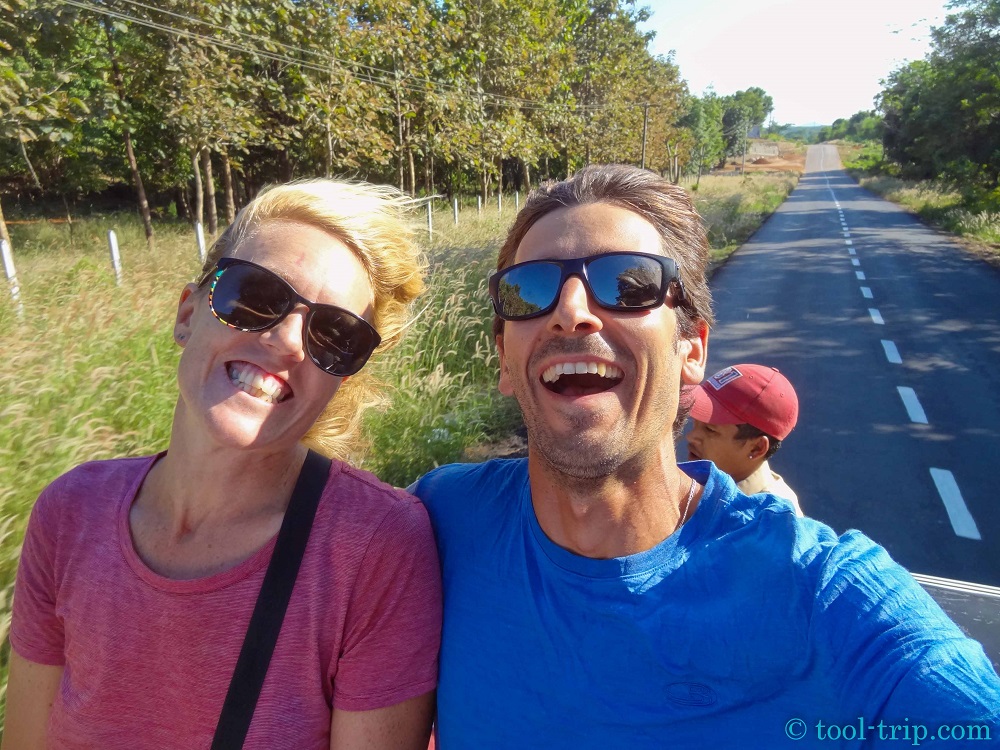 We caught an early bus from Hpa An, hoping to arrive relatively early in Kinpun (the base village) and hike to the top of the mountain to see the Golden Rock, rather than taking the normal pick-up. We’d heard from almost everyone who had been to the area that the best part was the hike up, rather than the Golden Rock itself. Unfortunately we didn’t arrive as early as we had hoped. We still needed to find a hostel, it was scorching hot and we were starving! The practicalities of a 4 hour hike up a mountain, to arrive with enough time to visit the Golden Rock and make the last pickup back down was a little tight.  Instead we ate, took things slowly and chose to take the pick-up after all.

The pick-up station was 300m from our hostel. We expected to see 2 or 3, and have to wait an hour or so until full before we could go. There were instead 5 being loaded and almost full, and 5 more pick-ups waiting to move in once the others had moved on. These pick-up weren’t the normal pick-ups you see in Myanmar they were pimped out, huge wheeled, monsters. We squeezed onto the back row of one almost immediately and left soon after. 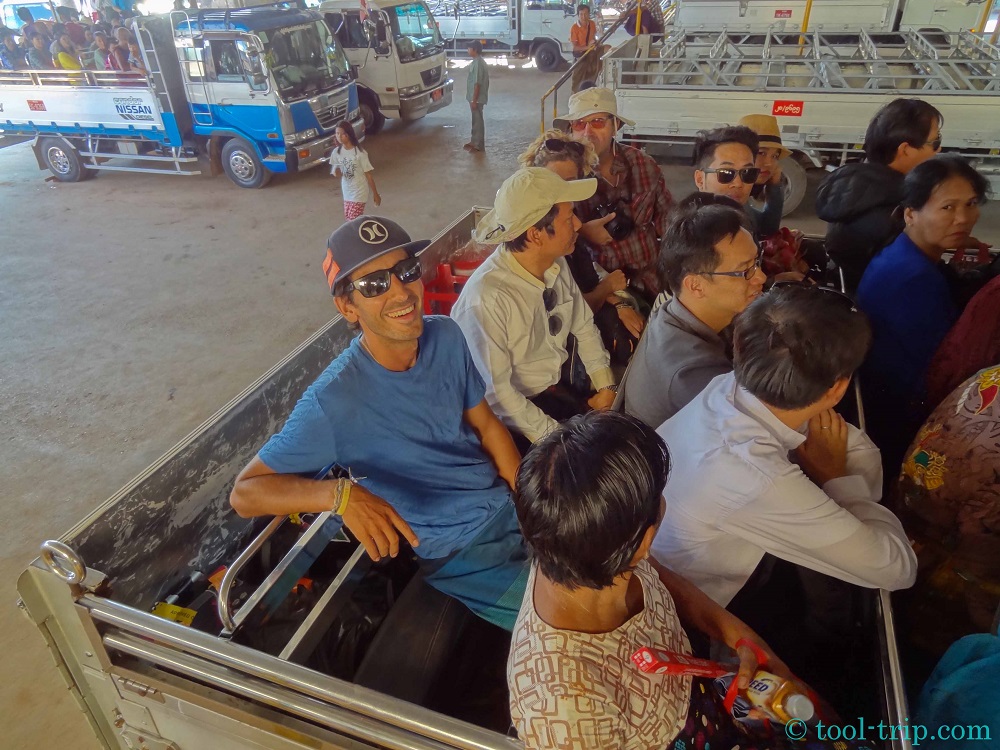 We’d heard the journey was memorable and it really was. It was like a Disneyland theme park ride but for 14 years and over. For 45 minutes we went up and up and round and down and up. We took maybe 20 hairpin corners at a speed you wouldn’t think possible and at a steepness of around 40°. It was sooooooooo much fun! We were laughing all the way and couldn’t wait for the return journey. 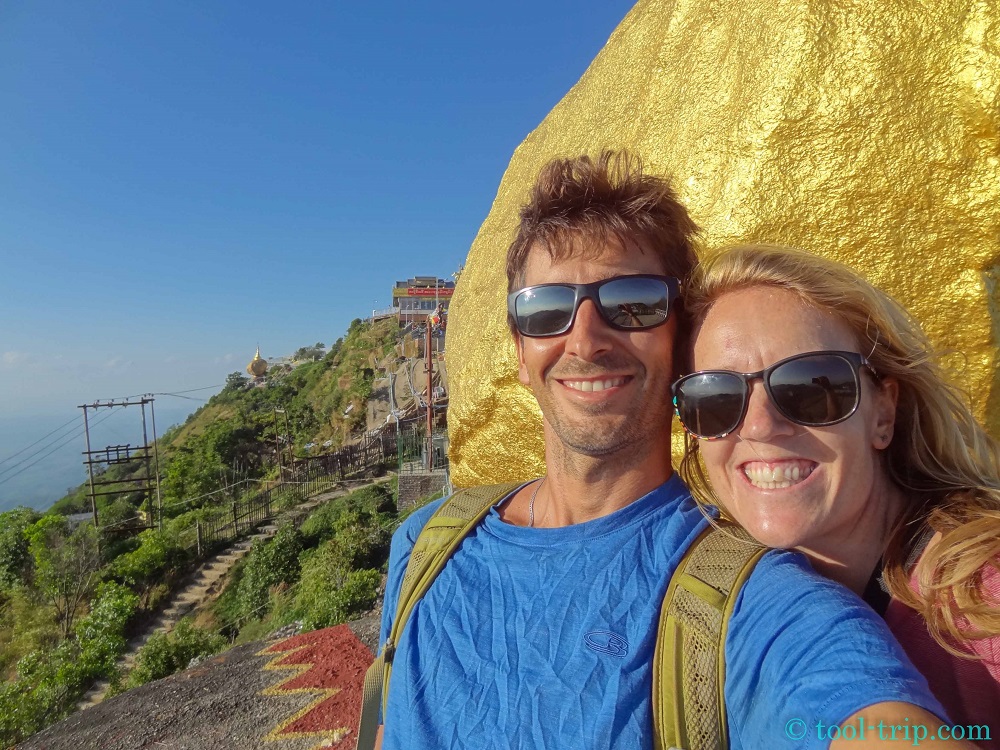 The real Golden Rock is the tiny golden spec in the far background!

The Golden Rock was surrounded by a large complex of shops, restaurants and hotels, as well as locals sleeping in designated areas on the floor for a few days. It was also part of a town, Kyaiktiyo, where people lived a normal life. Something we didn’t expect. It really was a ‘Mecca’ for Buddhism. The number of trucks full of worshippers going up and down the mountain, 45 in each, was pretty impressive. 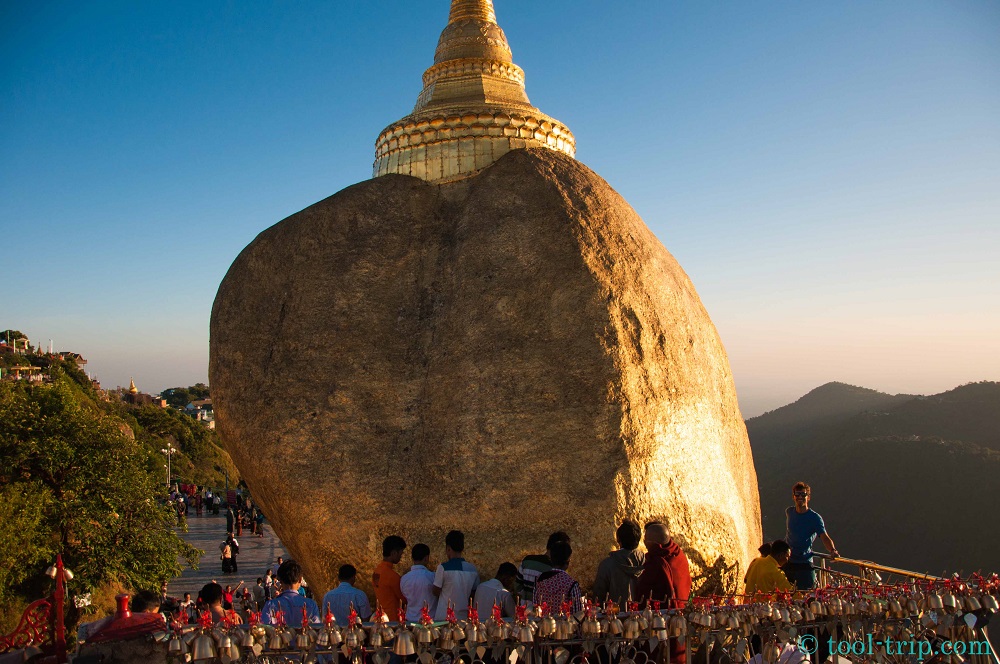 Tah dah! The Golden Rock and my amazing boyfriend

The Golden Rock itself was average. It looked like a big boulder (not as big as expected) that had been painted gold, and stuck on the side of a cliff. Although not amazingly spectacular, it was really interesting to see how the worshippers reacted to the rock. Some had spent their whole lives saving up just to see it. Kyaiktiyo the village, means ‘pagoda on a hermit’s head’.

The story goes that Buddha gave a strand of his hair to a hermit who kept it safe. The hermit then gave the hair to the King of Thaton but only if it was enshrined in a rock shaped like the hermit’s head. The king found the perfect shaped rock at the bottom of the ocean and with some magic help the rock was transported to its current location on the side of a cliff and the hair is holding it in its place. Apparently it is possible to pass a thread between the rock and its base if you rock it back and forth. That would have been a sight to see! 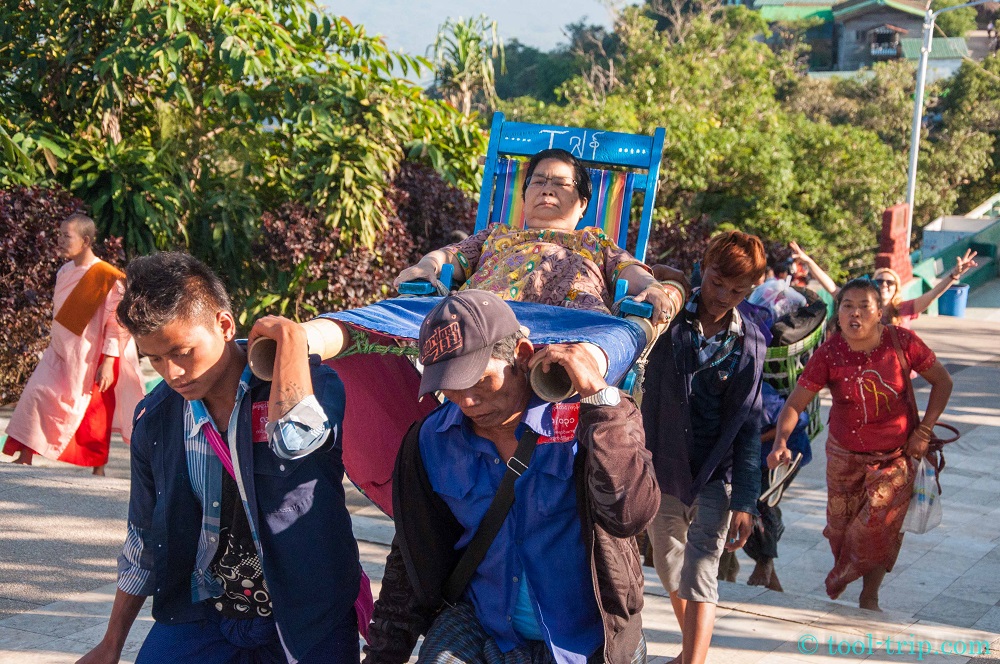 VIP treatment if required. Pick-up truck to hotel in Kyaiktiyo! 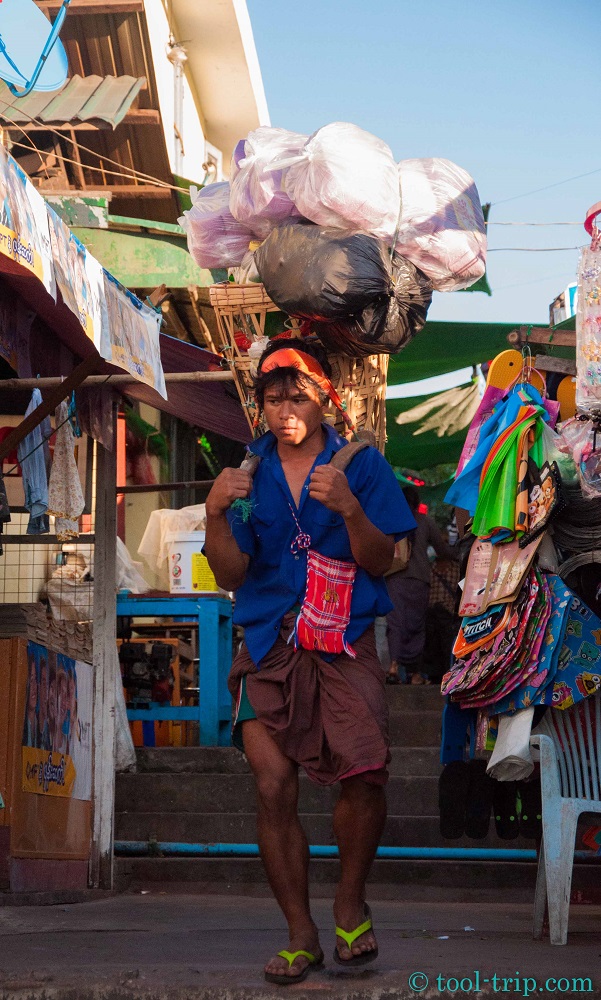 The only way for delivery services in Kyaiktiyo 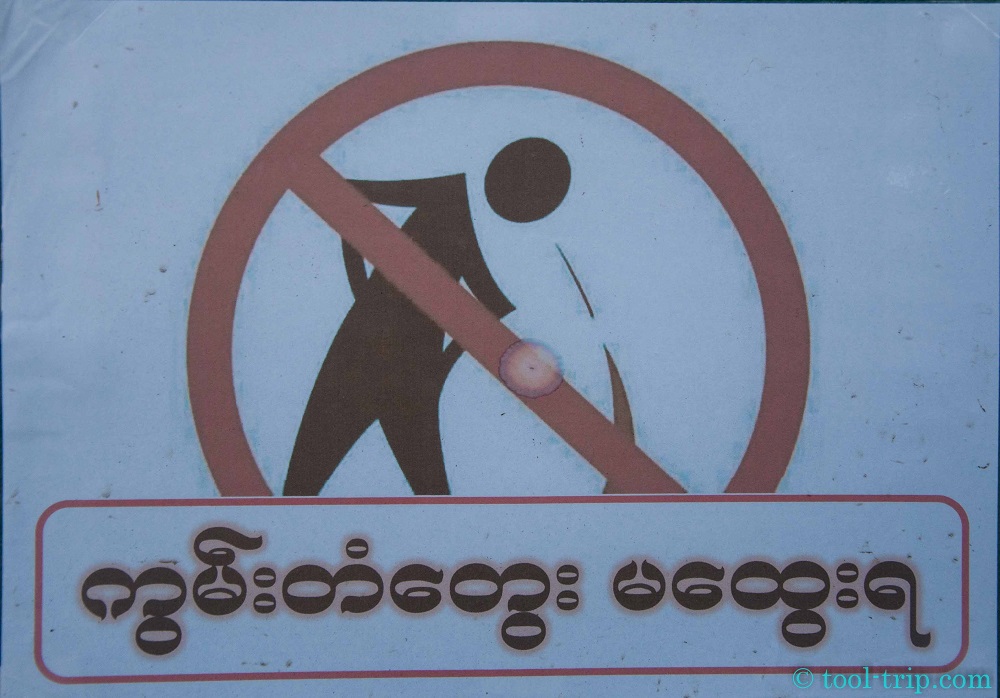 JM was lucky enough to touch the rock! Women are not allowed – something that happens a lot in the Buddhism religion. Luckily there was a golden rock which, to me, looked exactly the same and only 100m away. No one was there, and I got to touch it! It clearly wasn’t as important but it was the principal that I should be allowed to touch a golden rock! 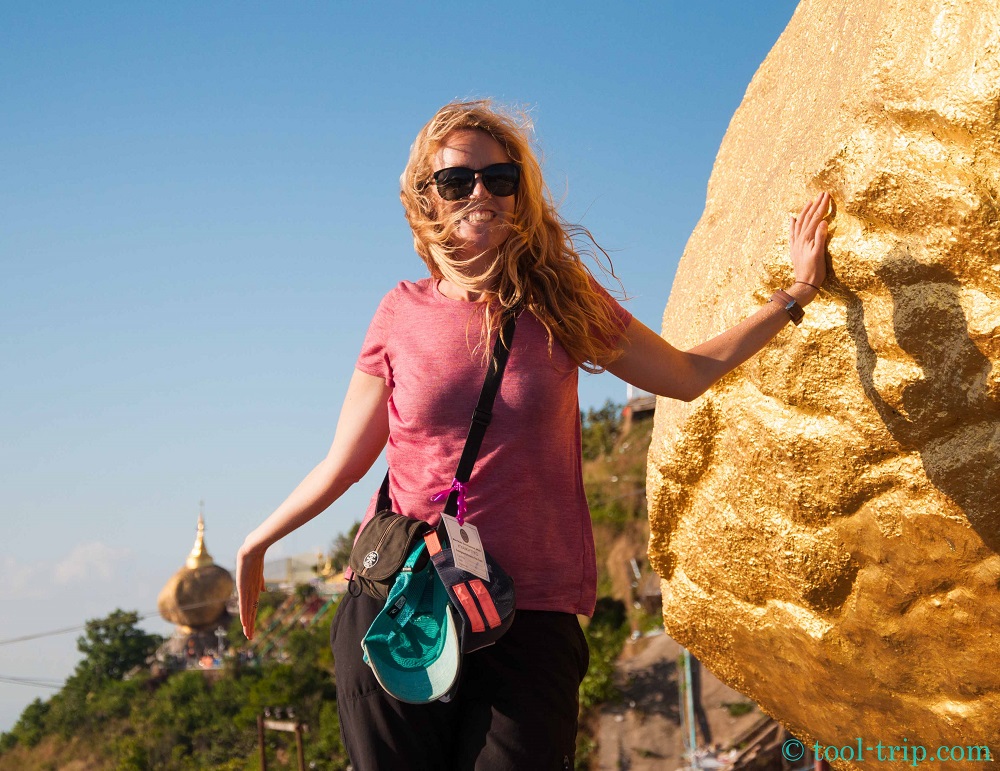 We spent an hour and a half at the top and that was plenty of time. We left eager for the return journey down. It was just as good, and made the whole trip to the Golden Rock worth it!

We spent our last night in Myanmar at the base of the mountain in Kinpun. Not a great place unless you like buying souvenirs, being pestered by waiters and eating the most sugary sweets ever. We booked our bus out of the place for first thing the next morning. Last stop Yangon, where we planned to take the circular train around the city and its surroundings before heading to the airport. Something we’d heard was a must-do in the city, and which we didn’t have time for 4 weeks earlier. 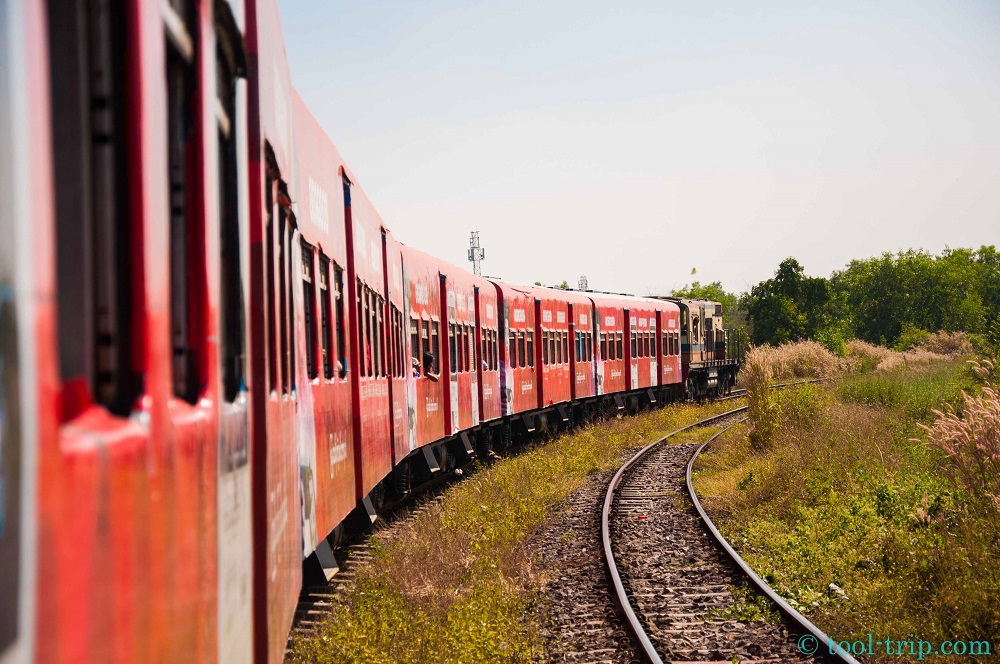 Back where we started!

We arrived in Yangon just after midday to the huge impressive bus station where we had left for Bagan 4 weeks earlier. We decided instead of paying the expensive and long taxis journey to the centre of the city, we would walk to the closest train station along the circular line. Approximately 3km away. With the airport only 4 km away we thought we could do the whole trip round once, get off, and walk a further 1km to the airport later in the day, saving time and money. 40 minutes of walking with our heavy bags we arrived at Mingaladon Market railway station where we waited for the train. 15 minutes later we boarded a very traditional train and spent 3 hours watching the beautiful countryside and the outskirts of the city go past. The locals were so so friendly. JM got chatted up by an 80 year old woman who offered him her entire packed lunch! Very funny. It was great to see the locals going about their everyday lives, either heading to the city or carrying sacks and sacks of their fruit and vegetables to the market to sell. It really was a great few hours spent. 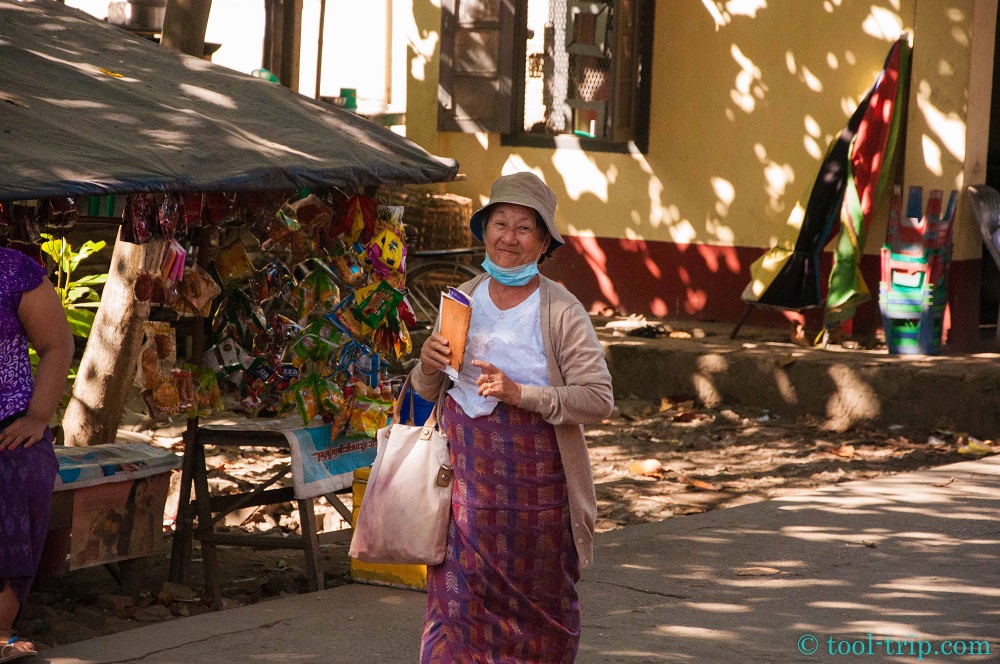 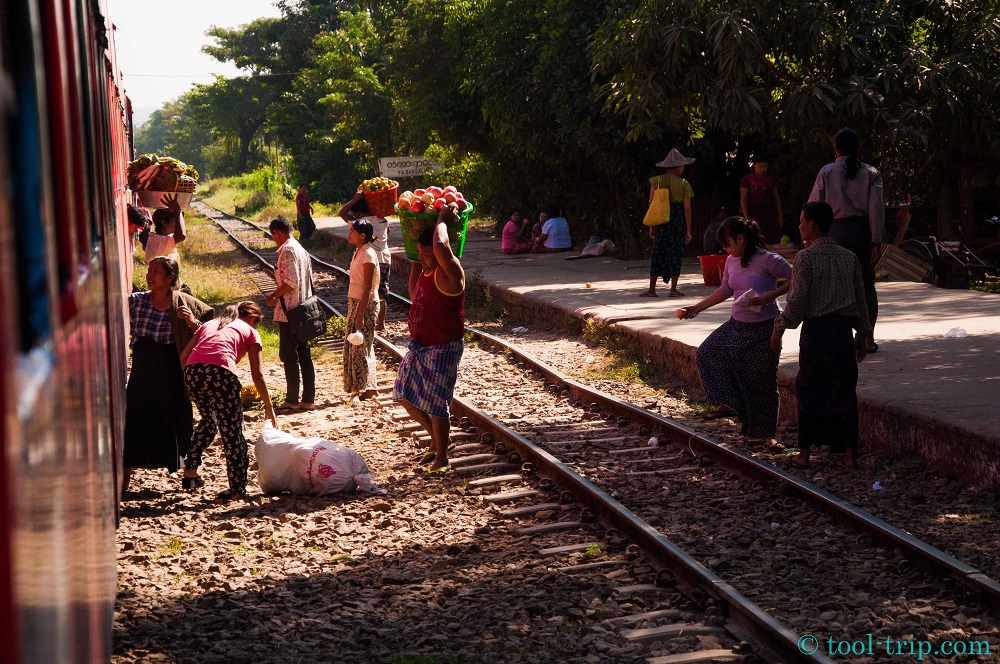 Everyday life onboard the train 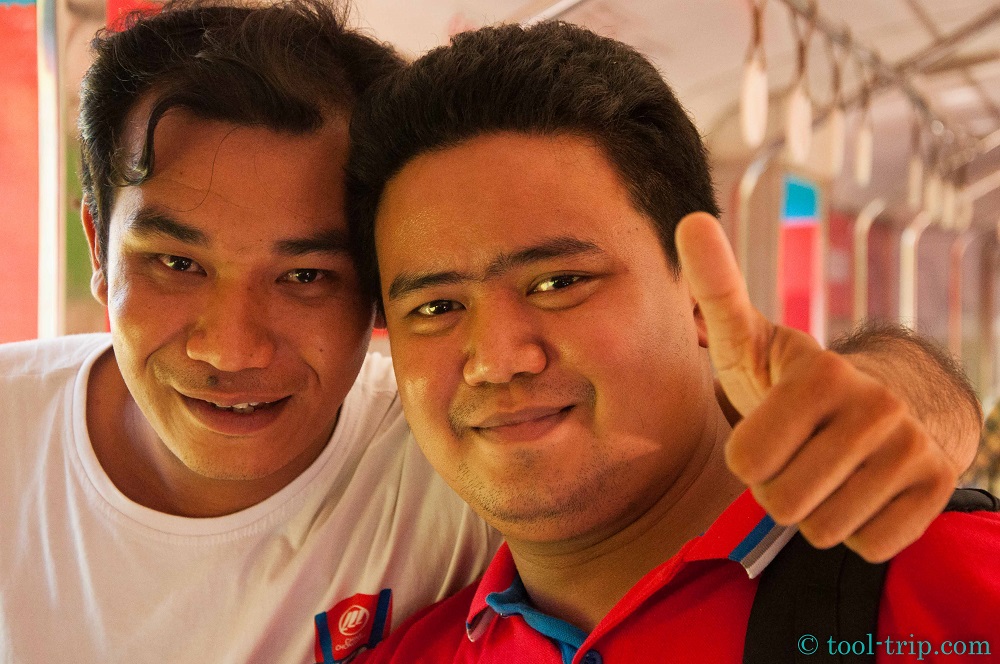 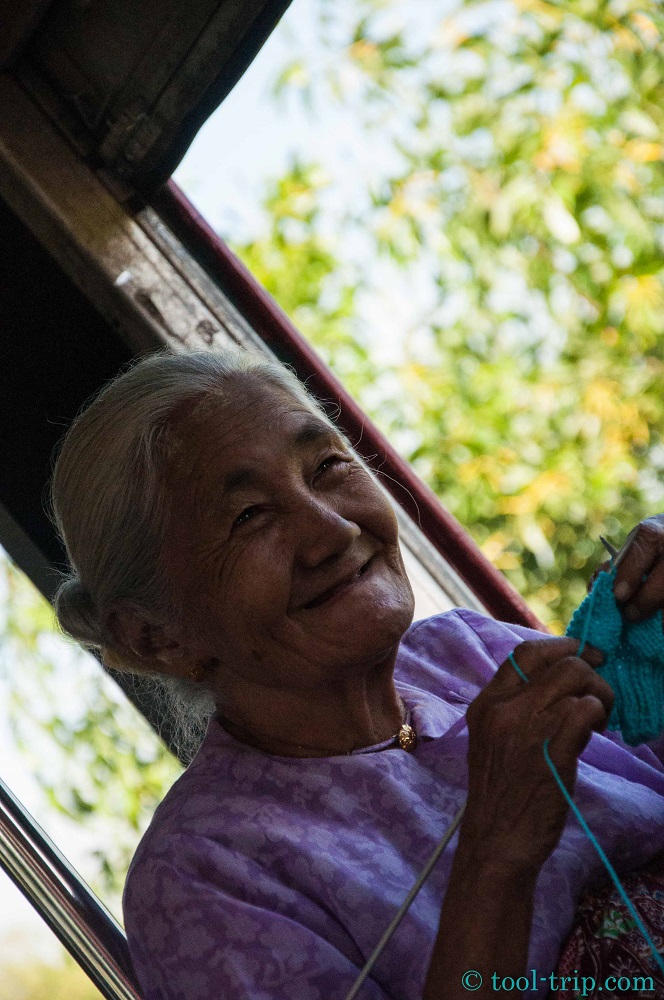 Sweetest woman on the train!

Almost halfway round we stopped near downtown Yangon and got off to have a late lunch for an hour before jumping back on the next train heading round the circular line. The second train was much newer. It had AC, it was less rickety, and there were a lot more people. Apparently they put on these trains when it’s rush hour. Although a little disappointed we weren’t having the same experience, we’d been told our first hour and a half journey was apparently the most interesting part along the entire circular route. It was still great to observe the locals from city commuting home. We continued a little further than 1 complete turn on the circular line. We passed 2 or 3 stations twice in order to get to the station closest to the airport. We could then walk the rest of the way. The train journey was definitely a great way to end our trip and for a whopping $1 each.

Myanmar has been brilliant!!! A bit too much betel spitting and monks asking for money for our liking but the country has so much to offer. Great cities, an interesting history, mountains, beaches, lakes and rolling countryside and of course stunning pagodas and temples EVERYWHERE. It wasn’t what we expected, but then we don’t really know what we expected. It is a must to anyone thinking of going to go now! The country is having an enormous tourist boom and a lot is changing rapidly already. Unfortunately for the worst (but great for their economy). When more of the country opens up i’m sure we’ll be back!