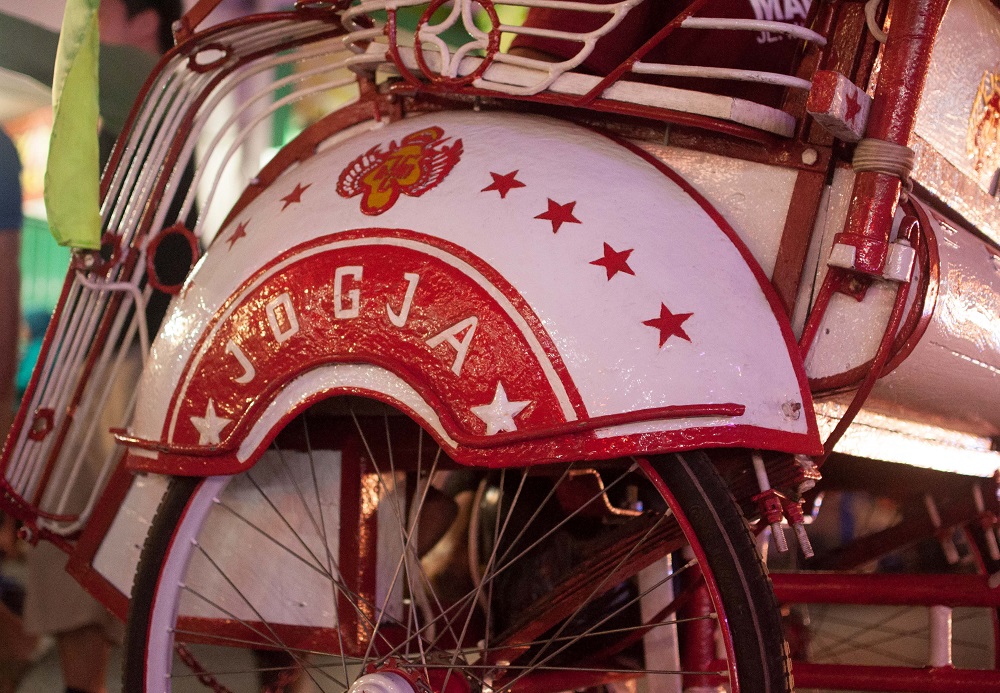 After some issues as usual at Padang and Jakarta airport, we arrived in Yogyakarta 3 hours late. Buses had finished for the day and the only way to get into the city was by taxi. 20 times more expensive than the bus (and that was after some serious negotiating!) 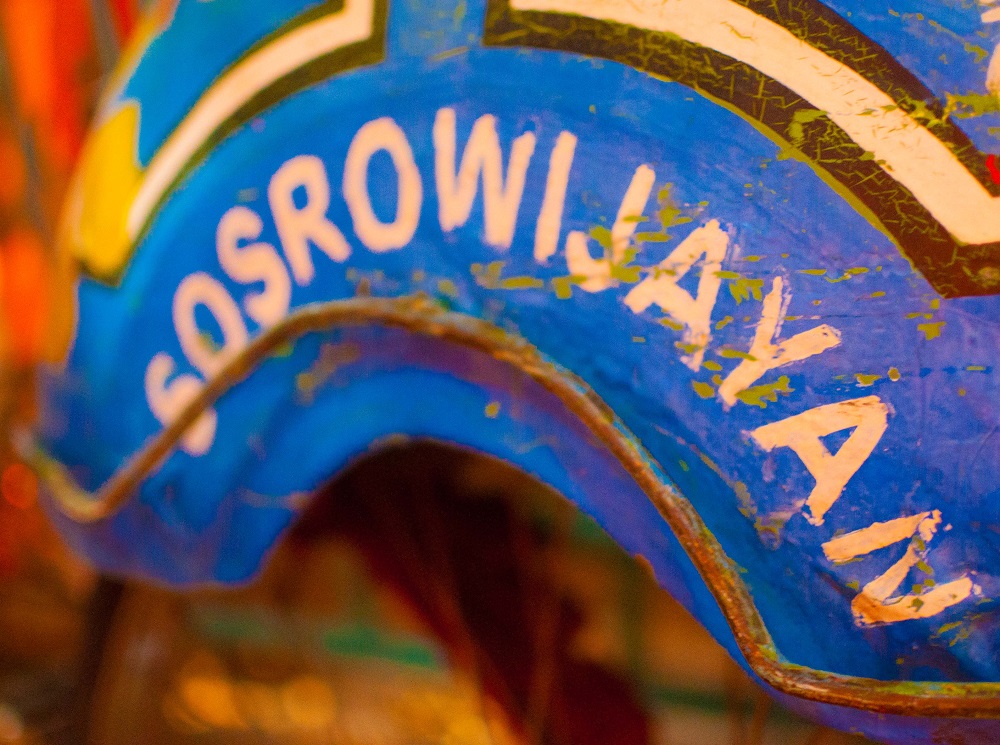 We headed to an area called Sosrowijayan just off the famous Malioboro Street. It’s comprised of a street with gangways either side crisscrossing and made up of local’s houses, homestays, cafes, restaurants, shops and boutiques. A really cool place. We had in mind a hostel but it was full so we followed a tout to another. Tired from an eventful day’s travelling and offered a room for a good price we stayed. It was quiet (except for all the pet birds!), simple, clean and breakfast included. We dropped our stuff off and headed to back to Malioboro Street 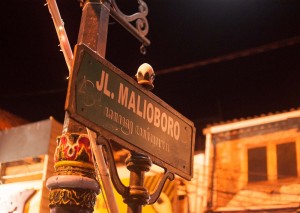 where the night life was in full swing. Live concerts, street food, markets, music everywhere, and happy people. It was such a fun night and cheered us up after a little disappointment at the end of our Sumatra adventure.
The following morning we decided to go explore the city on foot. We had already noticed in Sumatra and now in Java that the locals don’t like to walk. The fact that there are no pavements doesn’t exactly encourage people and maybe because it is 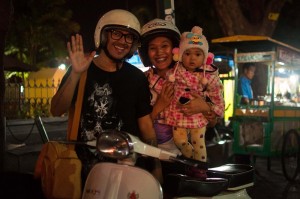 just so damn hot, people choose to take a bus, becat or oplet. We started the day off well and were invited into a hidden Batik art gallery. We were told all about the technique of batik silk painting all the while drinking a free cup of tea! I wanted to buy every single painting in the place, they were just stunning! JM dragged me away from the place before I got the chance! He could see in my eye I could easily blow our budget in one morning! 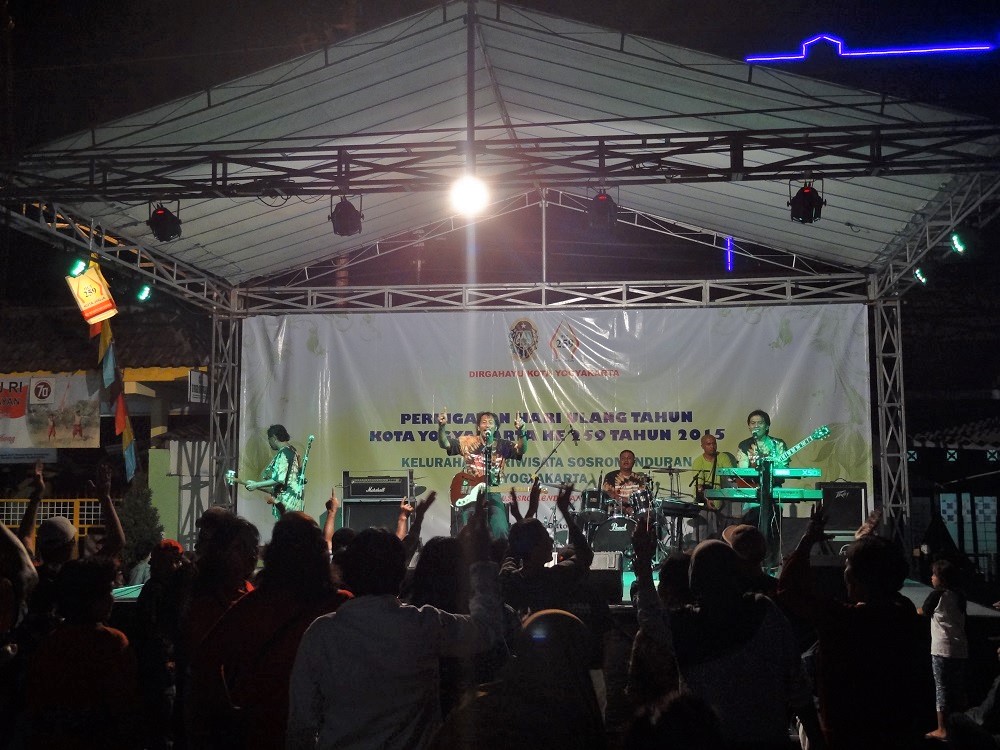 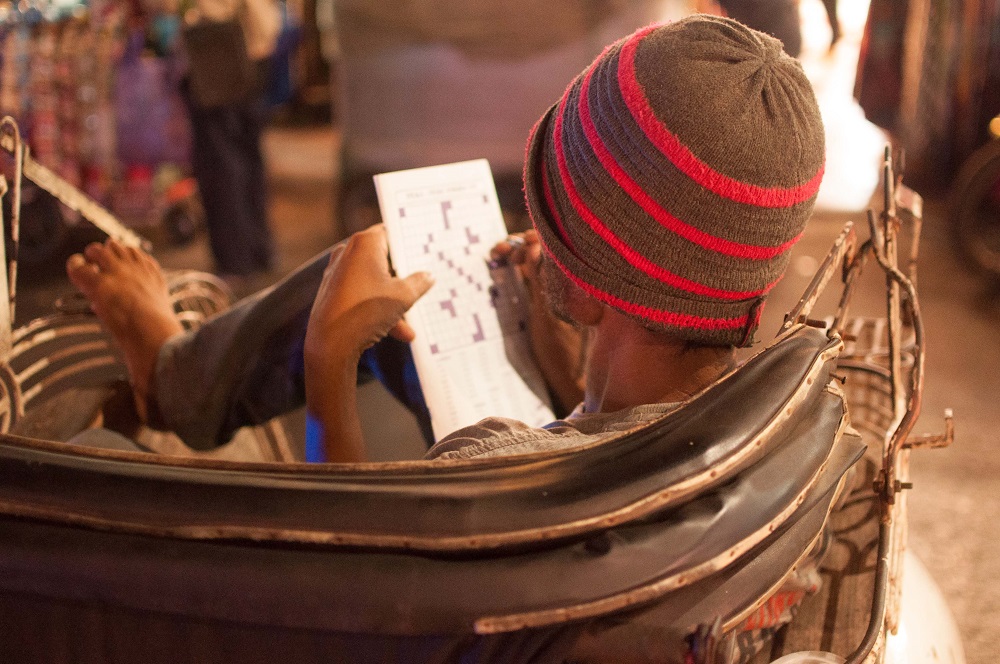 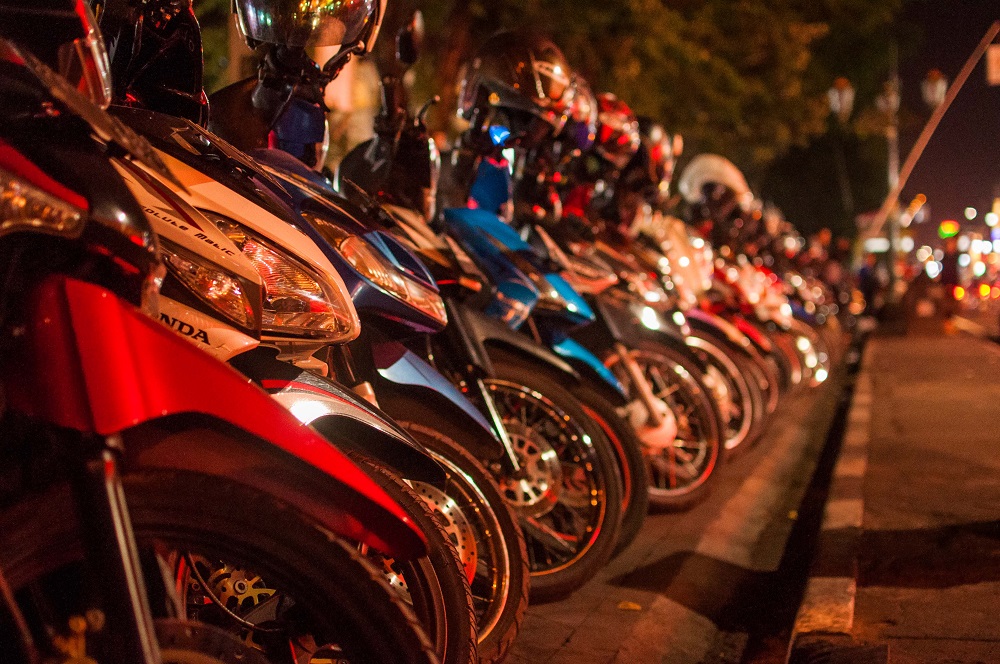 Afterwards we weaved our way through the crazy markets just off Malioboro. We still can’t see how 1000s of small stalls selling the same things are all still in business! 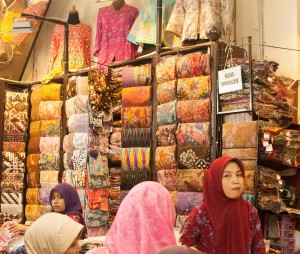 We then made our way to the Kraton. A palace complex in the heart of Yogya. One of the main attractions within the city. We had a map and with lots of enthusiasm we headed towards it. We probably walked for almost 1.5 hours backwards and forwards asking about 10 people how to get inside. 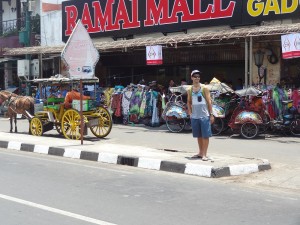 Where is the entrance? Sweating, hungry and tired we gave up and decided instead to try and get to Imogiri village; 20km south of Yogya, high up on a hill and home to a royal graveyard. We had heard it had spectacular views over the city. We started walking to the bus station but it was just too hot, noisy, no pavements etc. so decided to take the bus. Lucky we did. It took us 30 minutes to reach the bus terminal for a connecting bus to Imogiri. When we finally arrived at the terminal our next bus was ready to go. Luckily we understood that it was the last bus of the day and there would be no more coming back to Yogya. We would have to take a motorbike back.  Feeling exhausted from the morning we decided not to go. We couldn’t face having issues coming back later in the day. We decided instead to get back on the same bus we arrived on and head back to the city centre. We decided to give the Kraton one more try. 45 minutes still later no luck! So frustrated at not being able to find a single entrance to the popular tourist site we headed back to near our hostel for a big food refuel and rehydration. When we caught up with some other guests at our homestay later in the evening they told us the Kraton was apparently closed all day! Ahhhhhhhhhhhhhhhhhhh! Although we had a bit of an unlucky day we really liked Yogyakarta. It’s a great city with lots going on and the people were so friendly. We would have enjoyed it even more if it hadn’t have been for the HEAT! 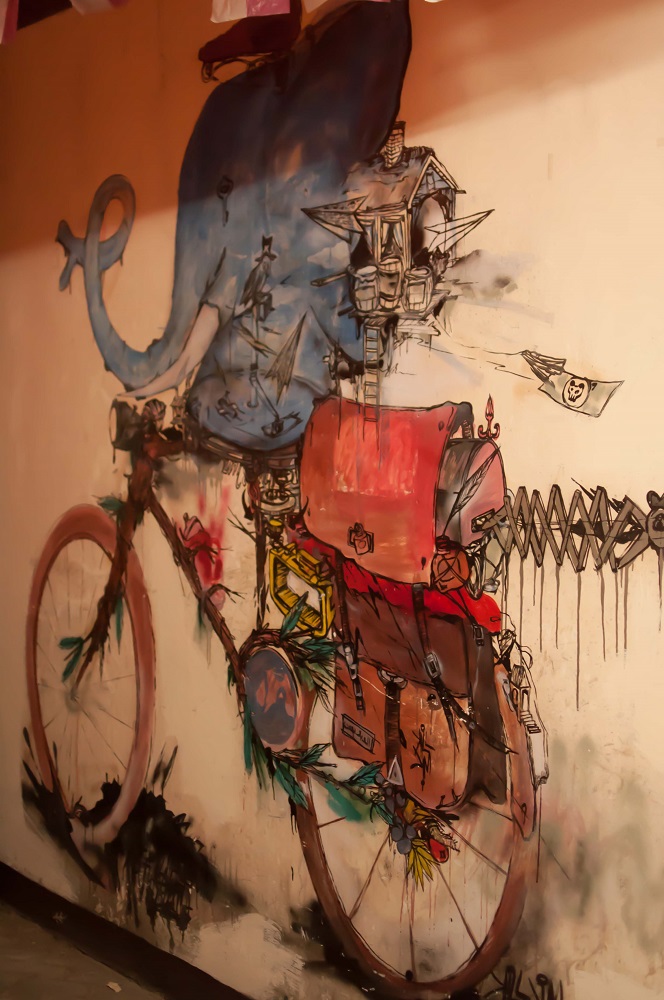 The next morning we headed to Prambanan Temple to the north east of the city. A SIMPLE (thank goodness) 35 minutes bus journey from near our hostel. We had heard that both the Prambanan and Borobudur temples had expensive entrance fees. They were right and what makes it worse is the HUGE difference in price for Indonesians compared to us internationals, almost 20 times more expensive. 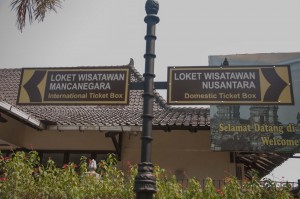 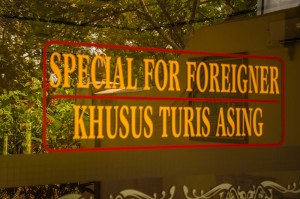 OK we understand and it’s only right for it to be cheaper for their own nationals but it seemed like they were taking the piss a bit. They do provide you with a sarong however, and tea or coffee but personally I’d just prefer to pay less thanks!
The temples however were absolutely stunning! We arrived early morning and the site wasn’t too busy. 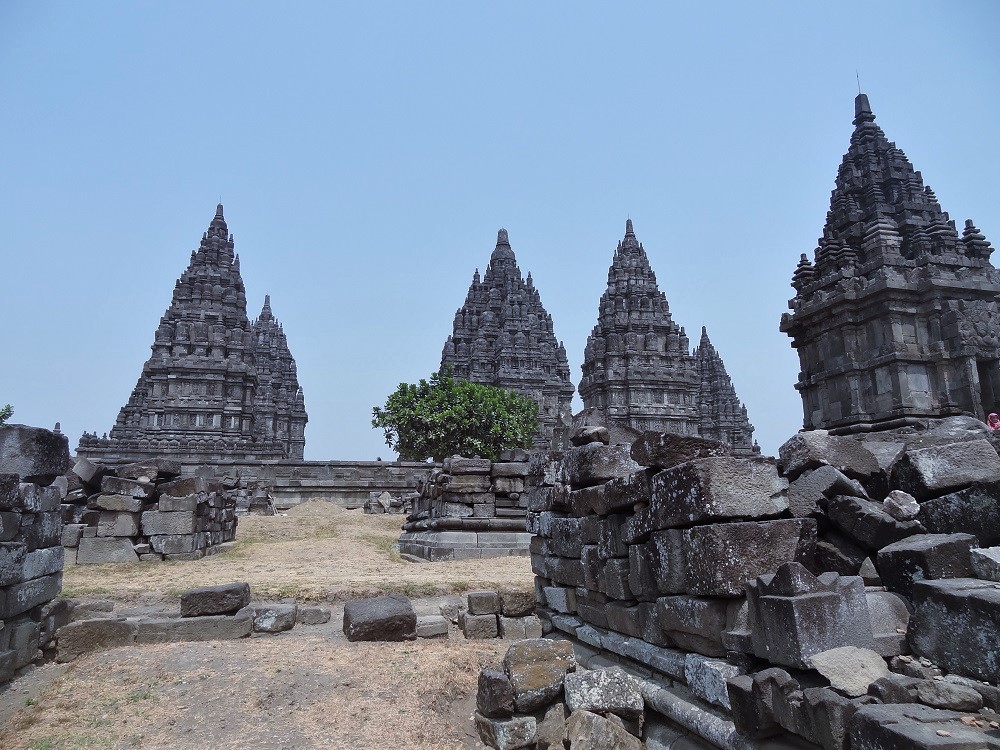 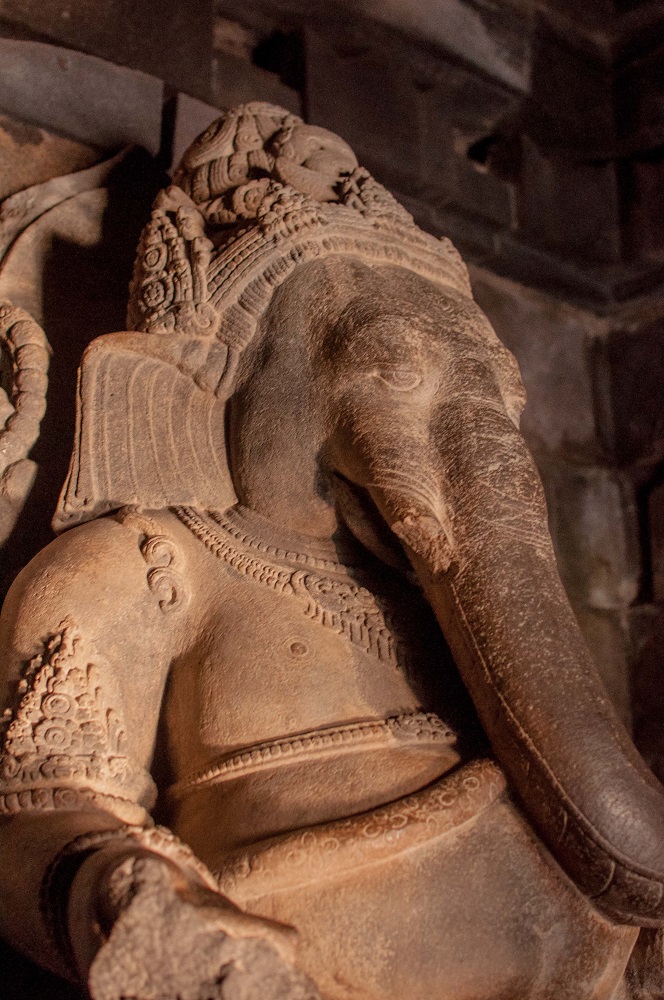 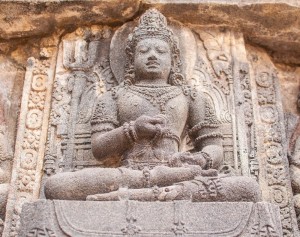 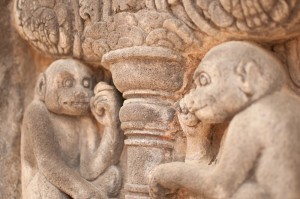 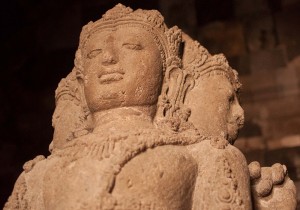 We had about 45 minutes before it got busier and busier and then coach loads of kids and Indonesian tourists arrived. It’s pretty impressive the noise a group of Indonesians can make! Plus we ended up being celebrities for half an hour before it got too much and we headed to another part of the site. “Photo miss!” “Photo mister!” “Photo, photo!” – We don’t mind but it’s a little bit of a shame there’s a stunning UNESCO world heritage site right in front of you and you want photos with us! In the end we spent almost 3 hours at Prambanan. 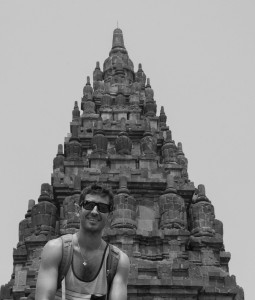 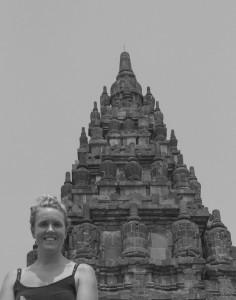 You could do it in a lot less time but we wanted our money’s worth. Most people just go to the main Hindu temples seen on the postcards but we headed to see two smaller temples in the complex. 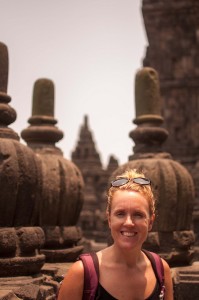 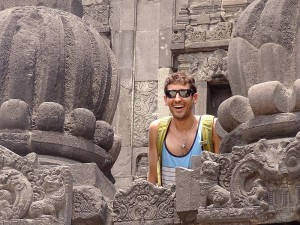 We discovered Temple Sewu, the second largest Buddhist temple in Indonesia and there was no one! Stunning and away from the crowds. It’s sad lots of people miss it. 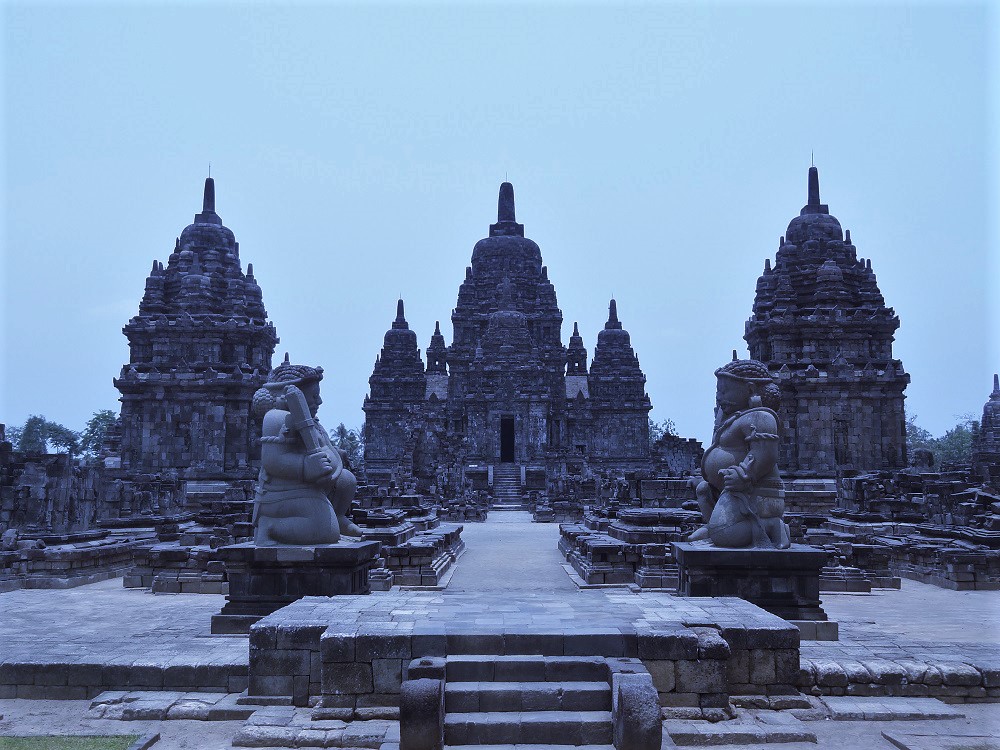 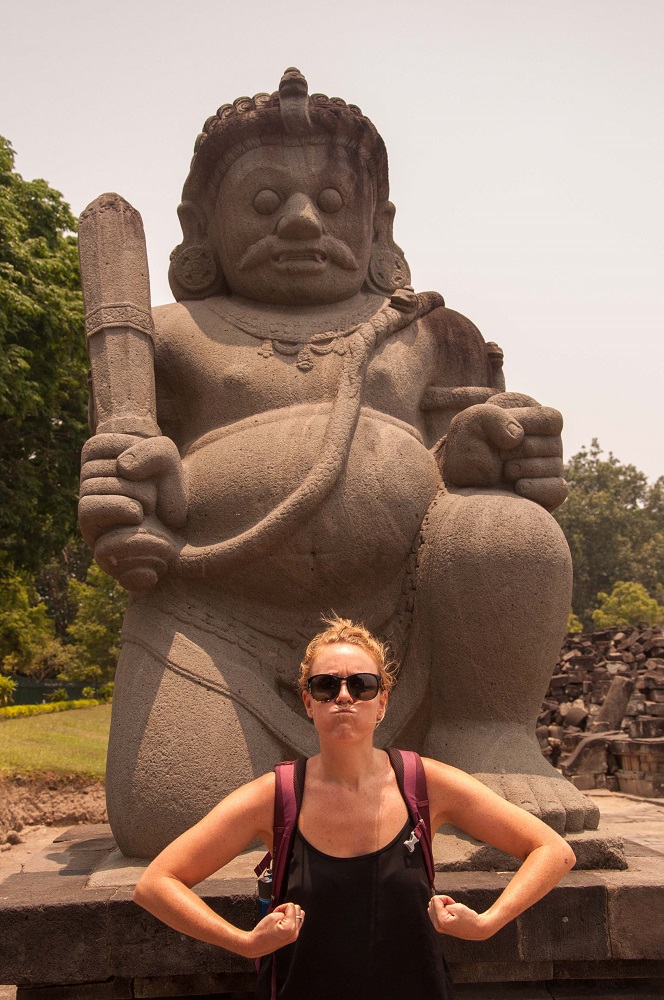 After walking and walking and the temperature increasing we headed back to the hostel and decided to pack our stuff and head to the quieter village of Borobudur, home to the world’s largest Buddhist temple.
All through this trip we are trying to get to places on our own and not through agencies that will charge a fortune but make everything much easier and organise it all for you. In order to get to Borobudur village we needed to get to bus terminal Jombor, to the north west of the city to catch a direct bus to the village. We left at 2:30pm in order to catch a bus around 4pm leaving us plenty of time. We were advised at the first bus stop to catch the 3A and then switch to the 2A later on because it was quicker than taking the 2A all the way round the city. So following the advice we ended up waiting 40 minutes for the stupid 3A to show up. (After three, 2A buses went by!) We changed as we were told and then had to wait another 20 minutes for a 2A! By this time we wondered whether the first 2A that arrived at our first bus stop had already passed us. Our bus finally turned up full to the brim! We squeezed on sweating profusely with all our bags. We were a little relieved we were finally nearing the last bus station and leaving another crazy, busy, and hot city. This relief didn’t last long when it took another 45 minutes or so to get to the station. The city is huge and the traffic didn’t help.
On arrival at the main terminal we were told/ we sort of understood through sign language that there were no more direct buses to Borobudur!!! Brilliant 4.30pm and buses had finished for the day. No one at the time could speak any English. We couldn’t speak Indonesia so it was a little frustrating. We didn’t really like the thought of another night in the city.
Luckily a young guy turned up and helped us. He said we could catch the local bus which stops everywhere to Muntilan and then catch a small oplet to the Borobudur village after that. We decided to go for it. As usual they tried to charge us more than the locals but we were having none of it. The bus was so busy JM and I sat next to the driver with our backs to the windscreen and sitting on a ridiculously hot step which covered the engine!! We had nowhere to move or stand up so just had to sit and bear it! After 50 minutes of an extremely hot bum and uncomfortable ride we arrived in almost the middle of nowhere. No buses, nothing except a few food stalls. We only had to wait 2 minutes and an oplet came round the corner full of crazy happy locals who seemed so happy to see us. He took us to the centre of the village where we arrived to lots of becat calls and motorbike offers to take us to our hostel. Each time this has happened to us (being bombarded with offers of transport) we use the amazing app ‘maps me’ an offline google map that uses your GPS position and shows points of interest so you are never really lost. We used it again in this situation and found our hostel only to be 2km away – so we walked
We arrived at a hostel called Lotus tired but pleased to be in a quieter spot after a great but busy and loud time in Yogya. The hostel was pretty run down and not the best but we had heard accommodation in the area could be expensive. It really wasn’t plus breakfast was included and we received a 15% reduction on our entrance fee to the temple the next day. Bonus! 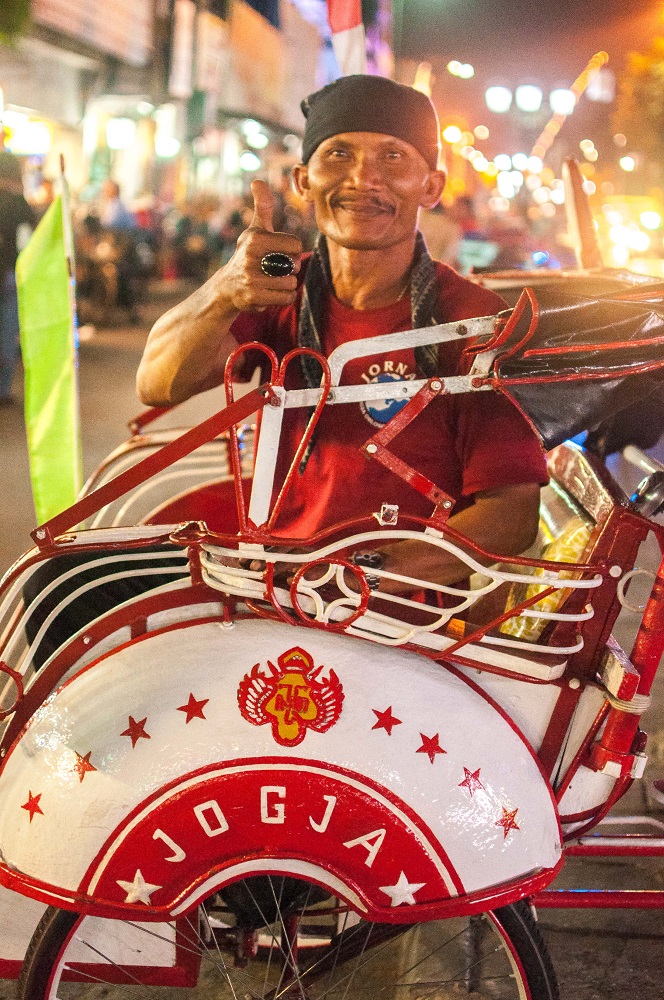