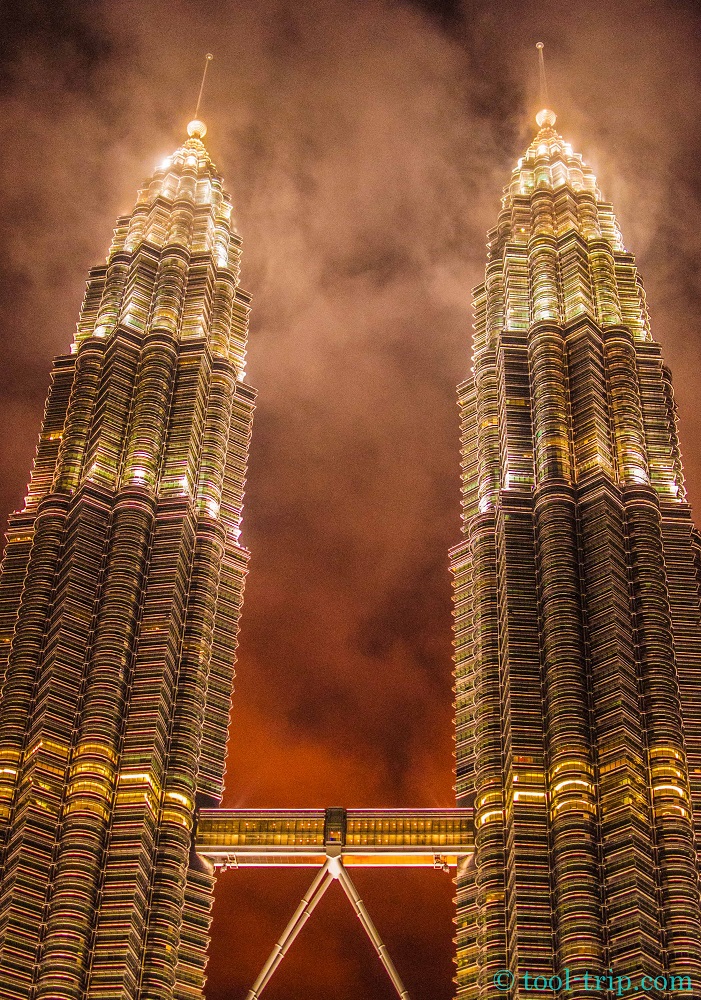 The next part of our incredible adventure was a city break in Kuala Lumpur.

On arrival in KL and for the first time in 7 weeks we got onto a bus with no problems, on time and without having to bargain a price. Heaven.

Bus, monorail and a little walk we arrived at a lovely apartment block home to Jo and Chris. The amazing couple who let us stay for a few days! Their apartment was incredible with a view to match. A little bit of luxury compared to what we’ve been used to – a comfy bed, a welcome beer, and a bath!! Yay!

On the first night Jo and Chris took us to one of their favourite restaurants located in a large, swanky shopping mall (as most restaurants are in KL). It was packed which is always a good sign, and we let them order for us. The Chinese dumplings which we’d never tried before and they’d both raved about were delicious! Along with all the other dishes! 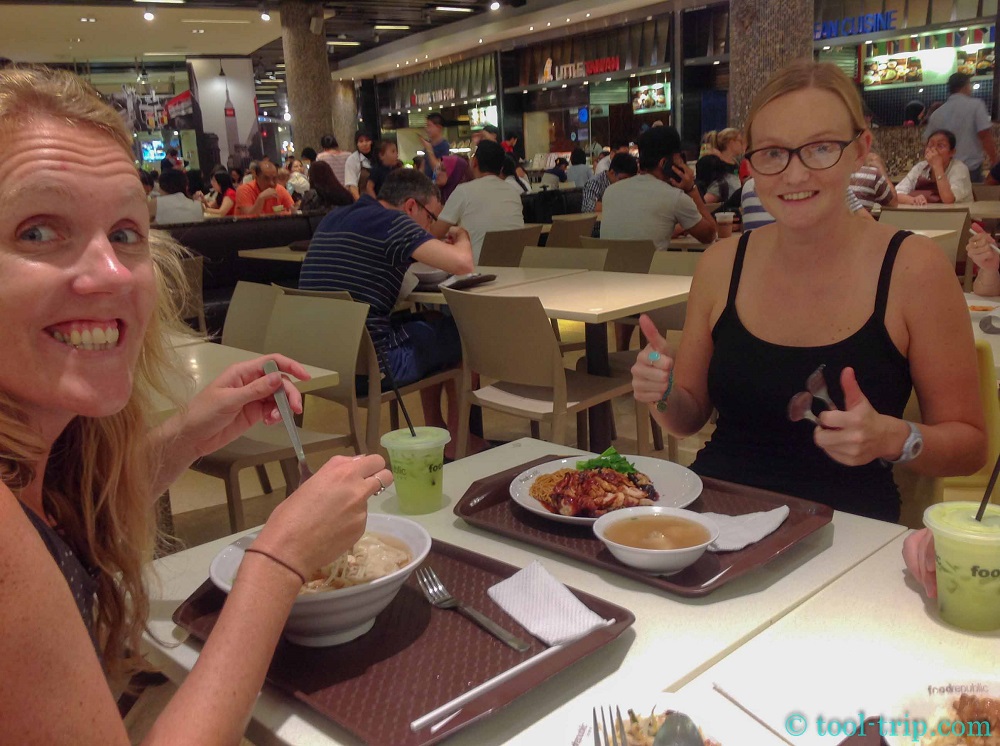 The next day we awoke to what felt like the best breakfast ever! Cereal and milk! Yes!!! We were so so happy. JM ate 3 bowls full! Jo and Chris really were fantastic hosts!

We had arranged the night before to visit the Batu Caves on the outskirts of the city. Chris recommended taking a taxi.  Split 4 ways it was as cheap as the train, easier and quicker. Chris gave us our first Introduction to Uber. We’d heard a lot about it – All good by our friends that use it, and all bad from stories in the Media. Our first impressions…… It’s incredible. So efficient, easy to use and a good price. Within 30 seconds of Chris asking for a taxi on the Uber app, a taxi not far away was heading our way. By the time we were downstairs it was there. There’s no exchange of money, everything is automatically done from card details given when registering. Genius! 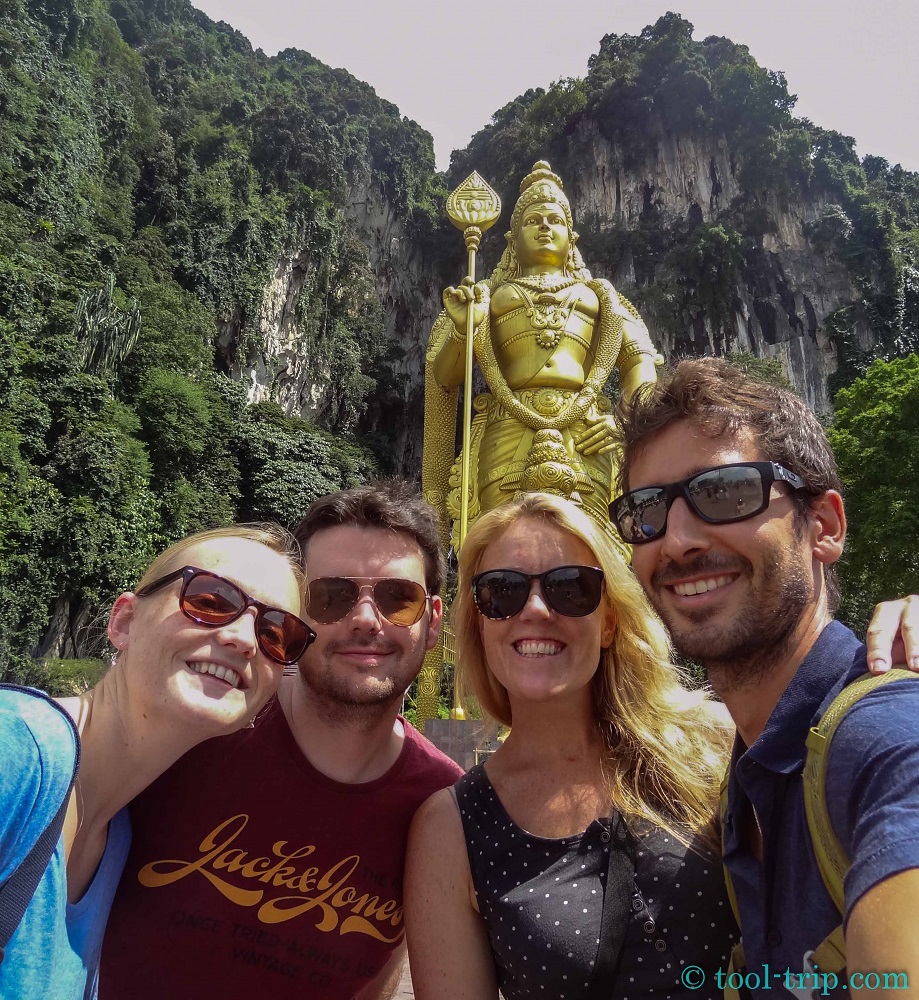 An enormous gold statue and a huge flight of stairs greeted us at the entrance to the Batu Caves. There was a great ambience, lots of laughter, noise, colour and religious energy. 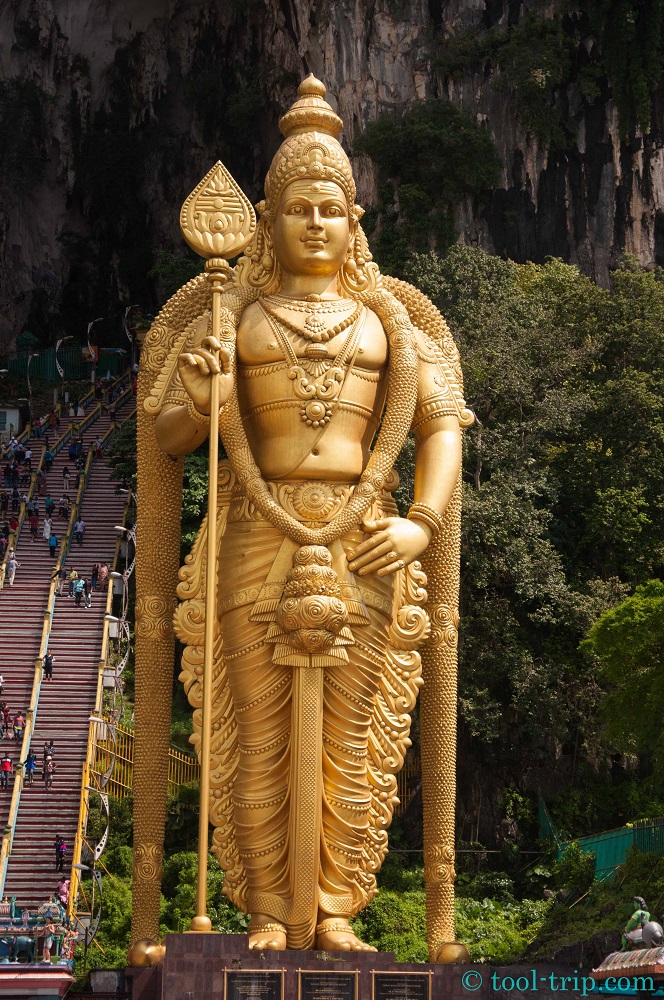 We began to climb the 100s of steps leading to the cave. Naughty monkeys were everywhere and things weren’t helped by visitors feeding them.. Normally there are panels saying do not feed the monkeys, but its part of the Hindu religion to care for animals particularly at religious sites. We made it to the top without a monkey incident. 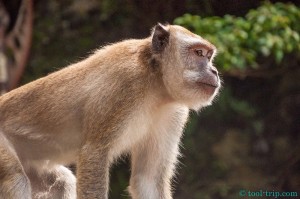 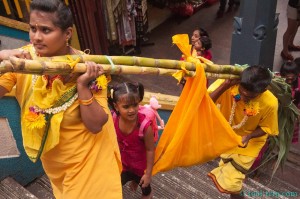 We arrived to a huge impressive cave. The interior was a little bizarre because the majority of the area was bare. We expected more colour and shrines. However, we later learned that over a certain weekend of the year, millions of people gather inside. Hence needing such a huge space with nothing in it! 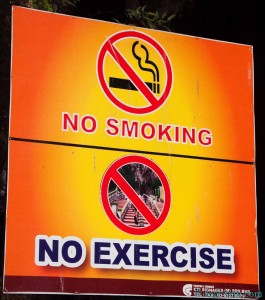 The two small temples were very decorative, colourful and everyone was in great spirits. After an hour or so we headed down the staircase crossing some idiot Chinese tourists who were feeding the monkeys then freaking out, screaming and then trying to hit the monkeys away – all for some selfies and videos – much to the frustration of everyone. Again we made it to the bottom without any monkey inflicted injuries. We returned to the city and set off exploring the malls of KL and eating more incredible, cheap food in the food courts. Sooo tasty. 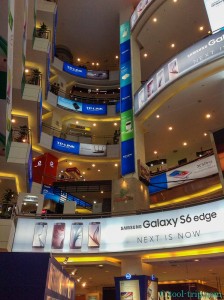 If we hadn’t had Jo and Chris with us in the malls we would have got lost a 1000 times. These places were huge! Anything you wanted you’d be able to find. We headed to an electronics mall to investigate the price of an underwater camera but not a go pro) and a computer for Chris. The mall was even more impressive than those in Singapore. JM and I both got a little overwhelmed by the experience and decided to keep our money safely in our pockets. Not buying something for the sake of it.

On our way home the heavens opened and a Malaysia rainstorm decided to show itself and very impressive it was! A lot of KL malls and buildings connect themselves someway and work well in situations like these. For us however, we needed to cross one single road maybe 20m wide! It took a few seconds to cross and boom – soaked to the bone. We also discovered why no one wears rain jackets. Hot, humid weather = wet waterproof inside (from sweating) and out. We’ll use the umbrellas next time.

Later in the evening we went to check out the fountain show underneath the Petronas Building and see it lit up at night! I fell in love with it. It’s such an unusual architectural design. It looked amazing. 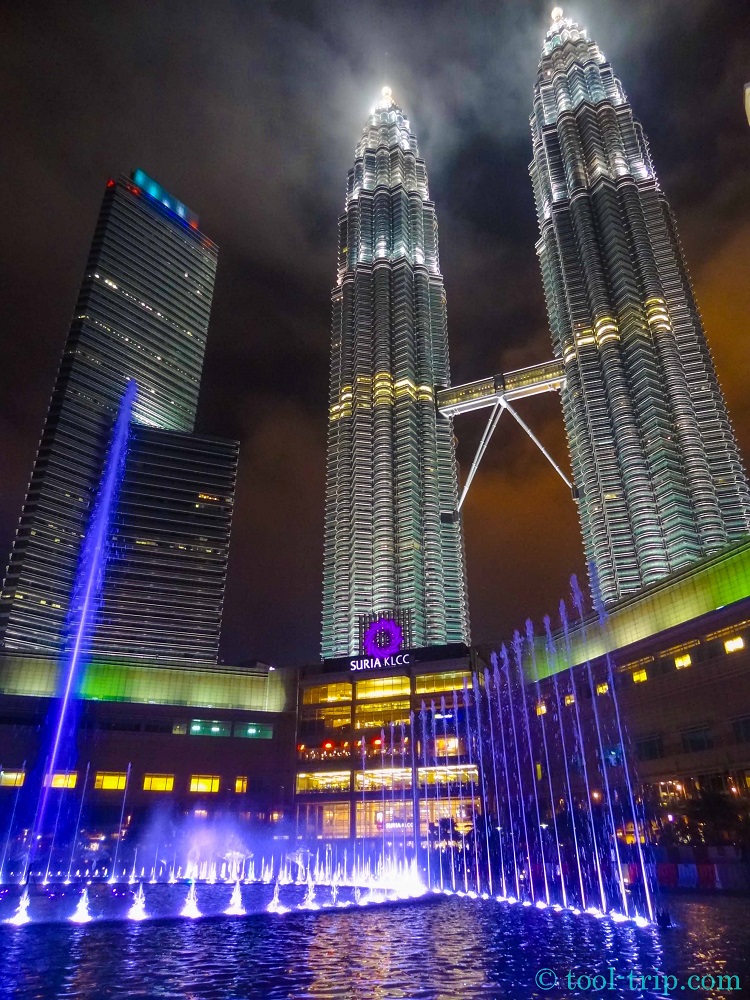 We headed to the food hall underneath the tower and again the food was just incredible. I had the best Thai green curry I’ve ever had in a restaurant. I didn’t want it to end!

Our priority for the final day in KL was our visa for Myanmar. You can apply for an e-visa online but for double the price or be really organised and arrange it back in your home country before you leave. We chose to get it in another country the day before we needed it! We had read on numerous blogs KL was a great place to get your visa because ‘normally’ it only takes 1 working day and it’s much cheaper than online. We hoped this would be the same for us. We left Chris and Jo’s and walked to an agency near Chinatown. A fast 30 minute walk away. This wasn’t a normal agency where you pay additional fees to get it done. The Myanmar Embassy themselves decided to move all visa enquiries and applications to this particular office instead of everyone turning up at the Embassy. We arrived at 8:45 and walked straight in, filled out the application form, gave 2 passport photos and 30 euros each and 10 minutes later we were told to come back at 4pm to pick our passports back up. Boom! Excellent service and lovely people too. The rest of the morning we walked and walked exploring Chinatown, little Indian, KL Tower and its weird creepy gardens finally returning to Jo’s before lunch. Unfortunately for Jo workmen decided to make noise in the neighbouring flat so we decided to leave and head out for some food and hopefully facetime our families at last! After more amazing food and unfortunately no facetime with the family – Slow internet! JM and I went to pick up our visas en foot again. We could have taken the monorail but it’s a great way to explore a city. We walked and walked and walked – a different way than the morning of course! When we arrived it took us approximately 45 seconds to pick up our passport with the new visa in and be out the office door! Incredible. We headed straight back to meet Jo as the heavens opened. Luckily we had an umbrella otherwise we would have been drenched.

Nicely tired, rather wet and in need of some chill out time we decided to have a night in. Our flight the next morning was 6:50am and we needed to leave Jo’s at 3:00am. Early night for us! 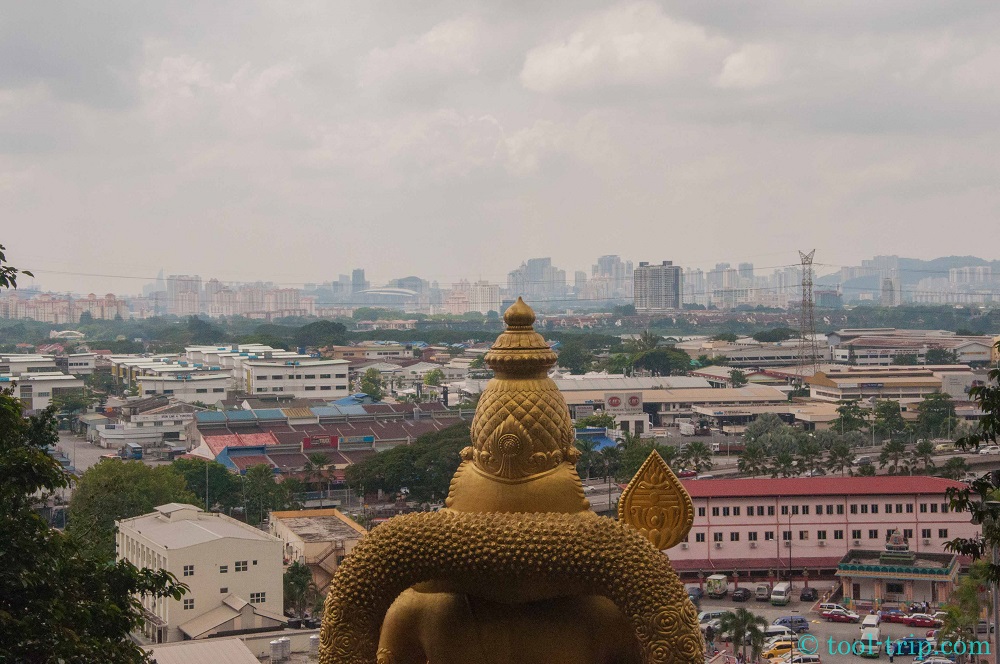 We just wanted to say a huge thank you to Jo and Chris for having us for a few days. We had a great time especially eating, eating, and more eating and loved you showing us the sites! You’re new city is amazing! 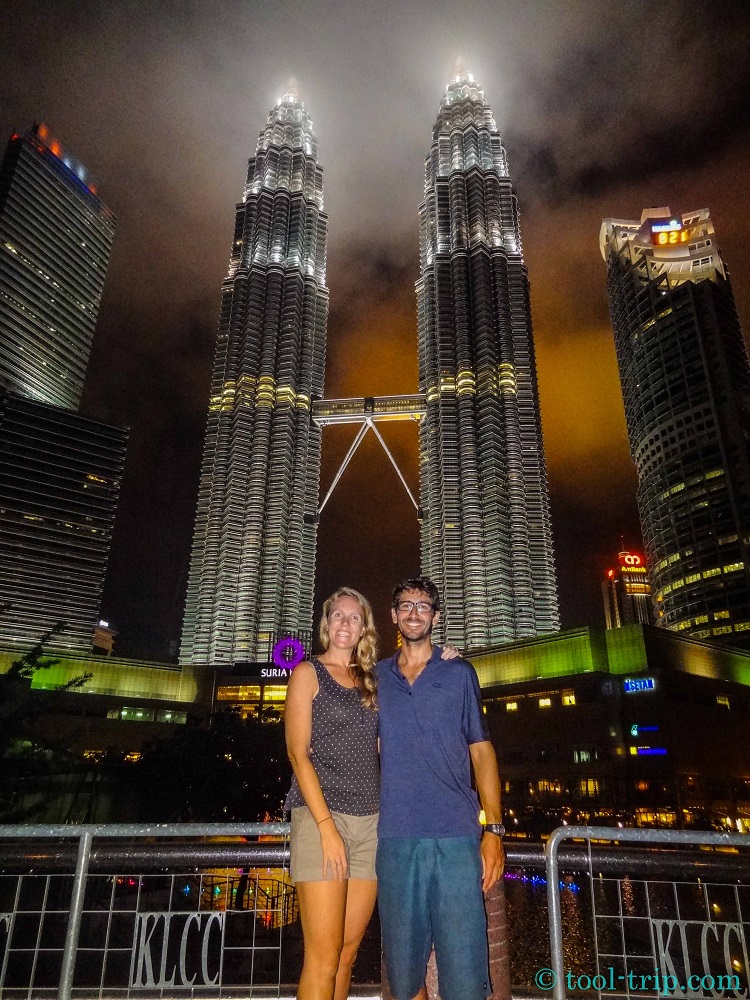