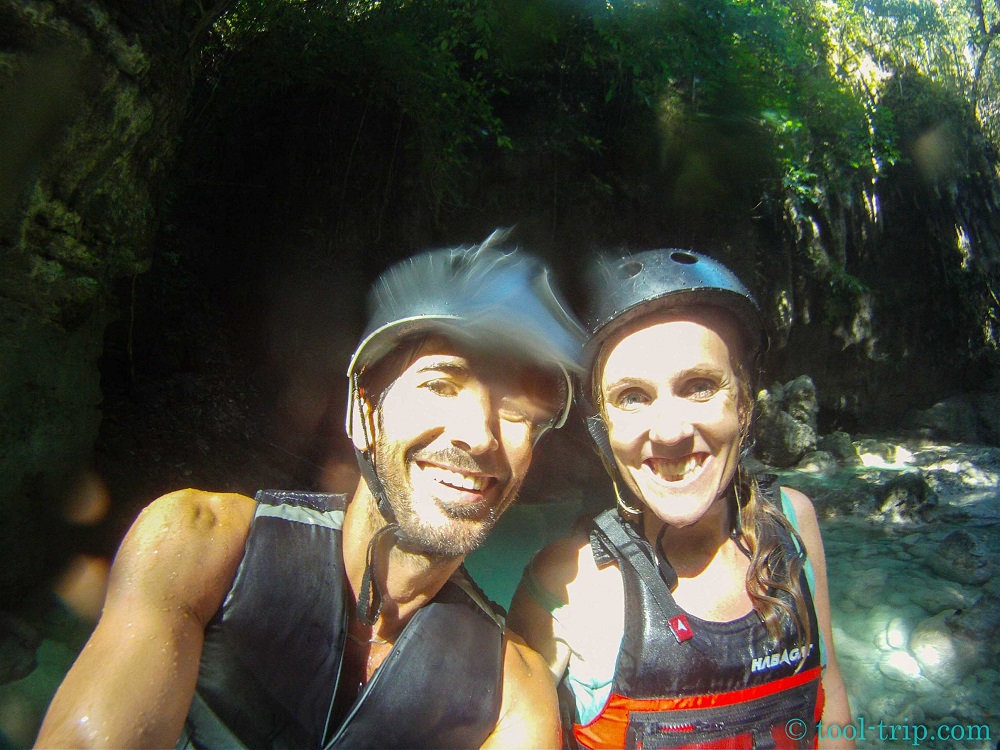 Welcome to the Philippines!

At last! We finally get to see the Philippines with our own eyes. Let’s go! For the last 8 years we have worked with a lot of brilliant Filipinos on board boats in the North Sea and elsewhere. They seem to be continuously smiling, happy and always very friendly, even when they are suffering from severe seasickness and away from home for 9 months at a time! We now get to travel their country for 2 months.

Hopefully this blog will give you and insight into how gorgeous the place and its people are.

Oh and sorry for the 2 month delay, we were having way too much fun in the Philippines and then in New Zealand – We love this travelling malarky!

The Philippines is an enormous country!

To optimise our time in the enormous archipelago of more than 7000 islands, we are choosing to start in Cebu and island hop around the beautiful Visayas for a month. Then we spend 10 days in Luzon, finishing in the very popular Palawan before leaving Asia from Manila. 8 weeks non-stop; rather ambitious of us but we hope to really experience what the country has to offer in this time. 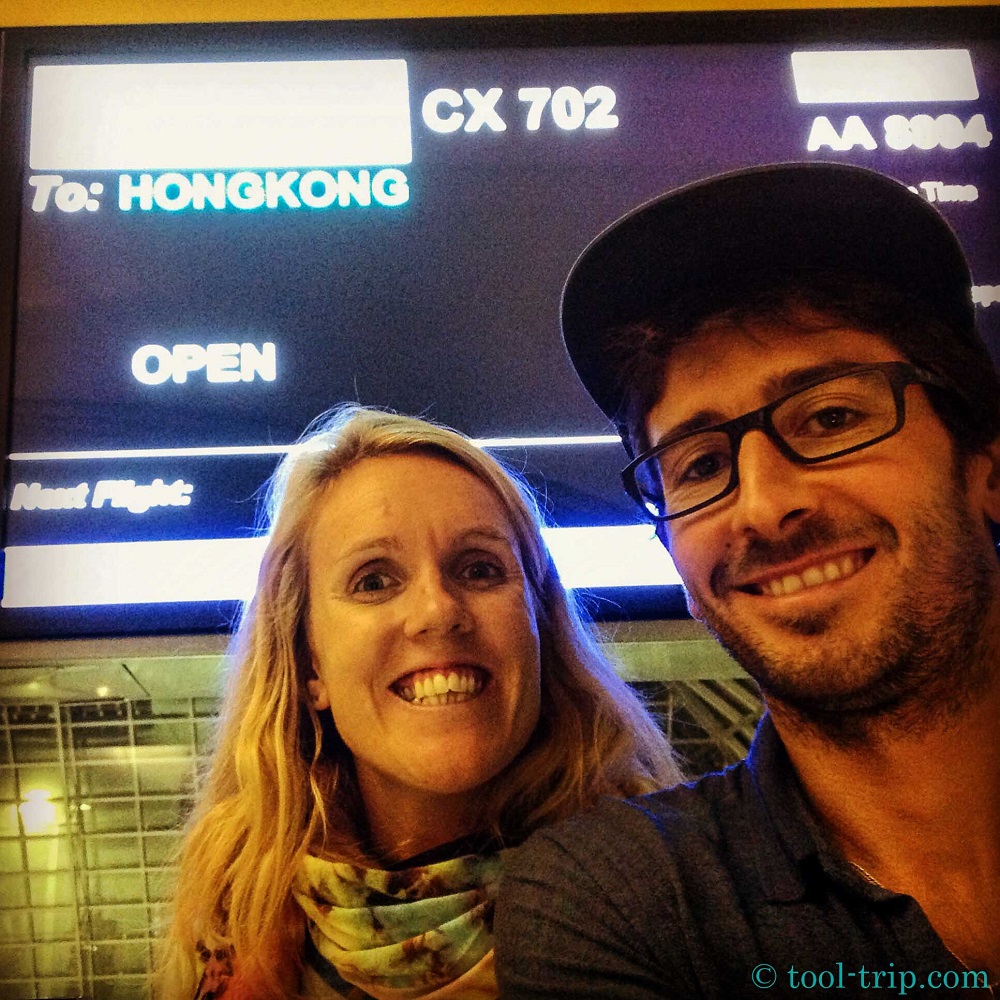 After a night stopover in Hong Kong, sleeping in the ‘Tranquille Zone’ of the airport, we finally arrived in Cebu City the second largest city in the Philippines. Our flight was horrible. Flying over the end of a typhoon was not fun! With our feet firmly on the ground and a 30 day free visa (intending on extending) I our hand to explore, we headed into the traffic clogged Cebu City to the main south bus terminal in order to catch a bus to the town of Moalboal on the west cost of Cebu island.

Moalboal is a well-known diving destination, famous for its enormous school of sardines and the canyoning in the nearby gorges. As soon as we arrived we took a scooter taxi to Panagsama Beach home to most of the hostels and dive resorts. As usual we had no idea where we were going to stay but the two motorbike drivers helped us out and took us to Ivonne Apartelle. They obviously got a little commisson from the guesthouse but it was a really nice place and a great first impression to what is available accommodation wise on the Island. The staff were ridiculously friendly, and the room basic, clean, comfortable, and cheap – ideal. We also randomly organised a canyoning trip through our motorbike drivers too. They quoted us 20 euros each which was a lot less than we were expecting after reading up on it. We agreed straight away and arranged a pick up for the next day. After a little thought we were a little gutted we hadn’t negotiated a bit more. To our luck, we spotted the guys in the street later on and eventually got it down to 16 euros each. Happy with our bargain price we then went on the hunt for a good dive centre. We worked our way along the ‘main’ street and went into what felt like each one.

We were a bit shocked by the average price of 30 euros a dive.

We were expecting much cheaper, everything we had read said the diving in Moalboal was cheap. If it’s expensive here, what is the rest of the diving going to cost in the Philippines?!!! 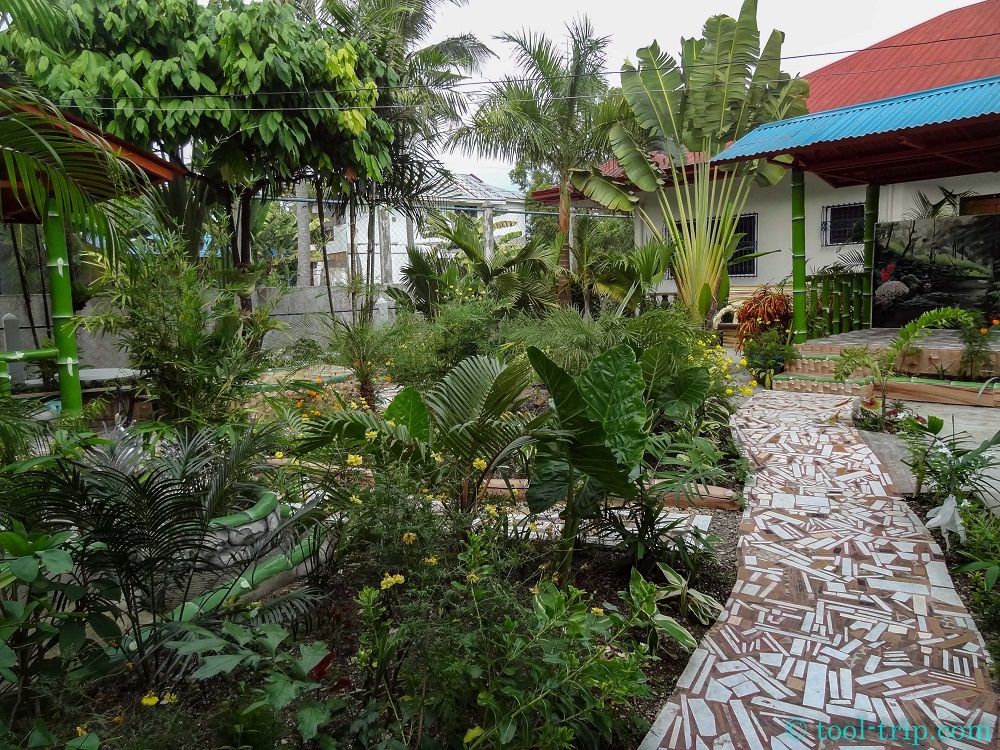 We eventually found Neptune Dive Centre who charged only 24 euros. Not the friendliest or the most enthusiastic of staff, probably because it was run by Europeans…… cheaper is cheaper and it’s saving us money. The rest of the first afternoon we spent walking around the small town like zombies, still suffering from the lack of sleep in Hong Kong. 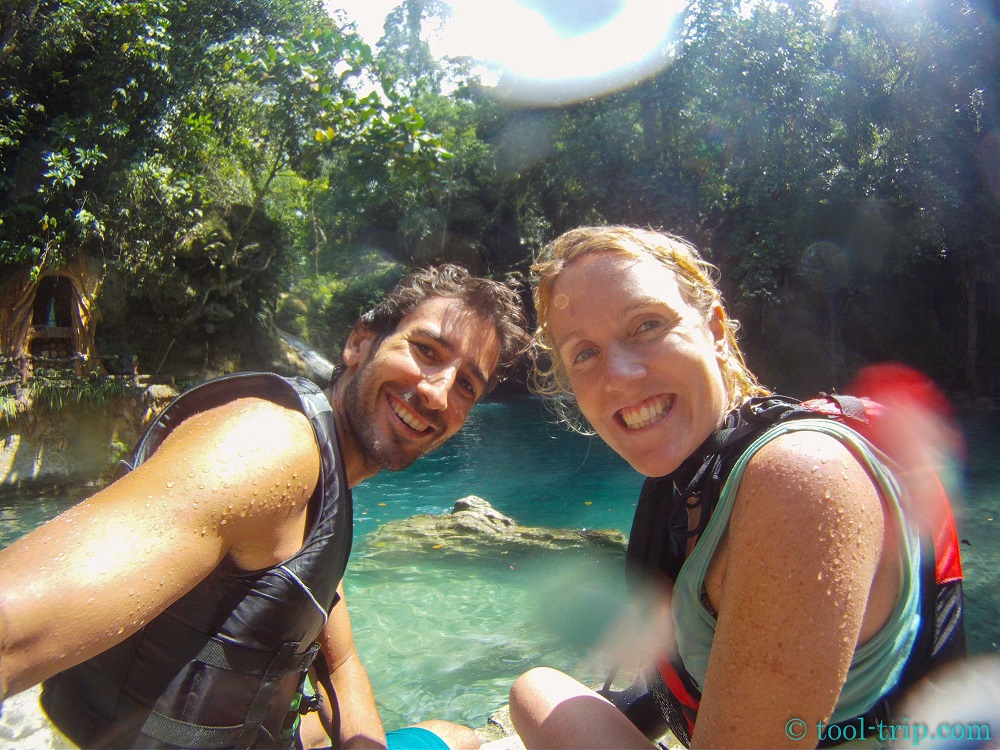 Best possible way to start our adventures in the Philippines.

The following day we were picked up from our guesthouse and taken to the start of the canyoning, 20km south of Moalboal. We went by tricycle which is always a fun experience, and the scenery was absolutely breath-taking. Just as we imagined the Philippines to be!!

We discovered our tricycle driver was also our canyoning guide, hummmm… Interesting….. Communication was a little difficult, he spoke little English and we spoke no Filipino at all. We went to the petrol station and he asked for 100 pesos from us for the fuel. We thought he was charging us on top of our all-inclusive price. We obviously said no and after 10 minutes of misunderstanding on both sides we understood he was going to subtract it from the final price. We thought we were off to a bad start! 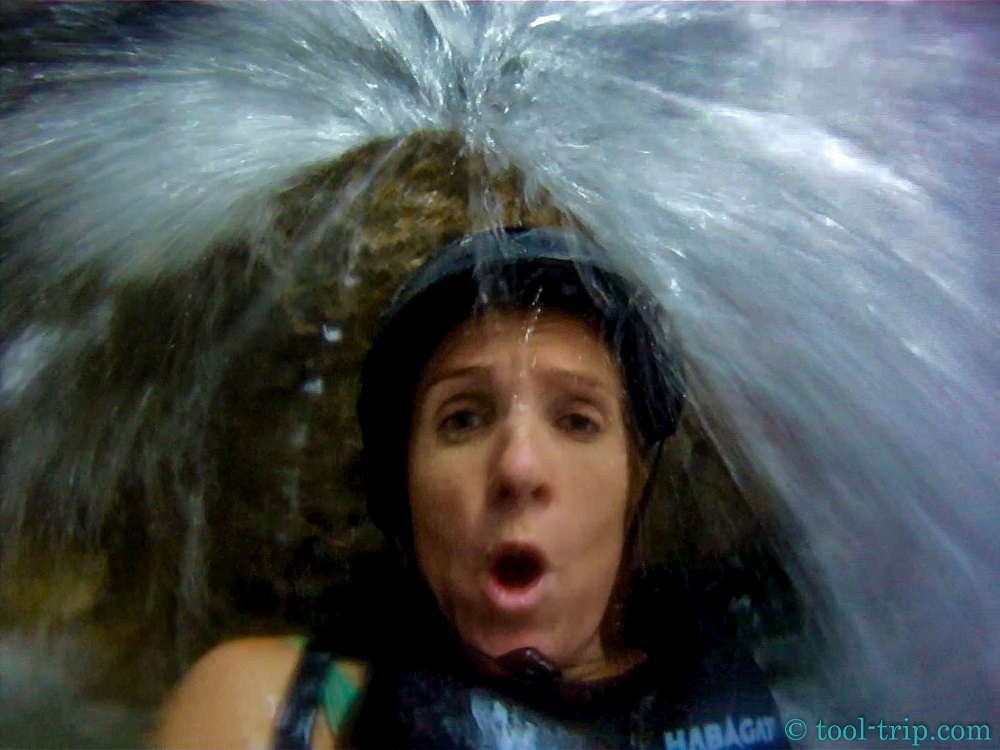 We arrived at the ‘base camp’ of the canyoning and were provided with equipment. Not the best it had to be said. My life jacket safety clips released each time I pulled gently on it, not a good sign when I would be jumping and climbing for 3 hours! We asked for it to be changed of course! We signed an accident, injury and death declaration form and off we went, 3 on a motorbike for another 10km inland – so fun!!! We passed 2 security registration desks on the way, filling out our names, nationalities, etc. before we spent the next 3 hours sliding, climbing, swimming and jumping through the most incredible Filipino gorge. It was spectacular. The colour of the water was fluorescent blue and the whole gorge was surrounded by jungle. We had smiles on our faces from start to finish. Our guide was lovely, really careful and constantly checking I, in particular, was ok. We came across two other groups, 10 in each. It looked like too many people, but they all seemed to be having fun! The second half of the 3 hours was where the jumps started to get big! Well big for me anyway. JM was acting like a little kid; he loved every second of it. The first ‘big’ jump was 10m and needed a running start! Ahhhhhhhhhhh. It was so high for me and having to run and not see what you were jumping into scared the jeebers out of me. We obviously checked it out by standing on the edge beforehand but still…… Making sure there was no one below and it was obviously deep enough, our guide went first…. No problem easy peasy, then my turn. I always choose to go before JM so I don’t chicken out. It took me about a minute before I got the guts to do it! But I did it!!! I did it twice in fact. I swear JM with no fear, wanted to do a cartwheel followed by a forward flip in the run up, but I guess that would just be showing off!

JM and the guide went even higher and decided it would be fun to climb the tree on top of the cliff we were running off. Once at the top of the tree they just let go and jumped 12m. Ouchy! Unfortunately due to our very old and rubbish go-pro we didn’t catch too much of the action, only a few unclear videos. We continued through the beautiful gorge, swimming and clambering over rocks, until we reached the penultimate jump – 13m, yes 13 big ones!! It was soooooooooo high and deep, known as ‘the jump’ to do!!! Pffff.

Leaving the best (worst!) till last!

Our guide told us, and very much aimed at me!!!!, that if we didn’t want to do it, we could take the stairs around the back of the waterfall and down. No way was I going to be a chicken! Our guide went first and it felt like he was in the air for ages! I decided I was going to do it as quickly as possible before I thought about it for too long!!! I took 1 step and a few big breaths and jumped. Boooooom I did it! I almost jumped before JM had the chance to turn on the camera. I didn’t want to think about it a second more and I think I impressed him. It took a few seconds for me to stop shaking and realise how fun it was actually was. JM followed easy peasy after us. We finished the morning at the Kawasan Falls a popular day trip from Moalboal. They are really pretty and good for swimming. We’d definitely recommend visiting them but combining it with canyoning is even better.

Canyoning Filipino style is not the same as canyoning European style. We didn’t need harnesses and there was no use of ropes. We just jumped, crawled, slid and climbed with our own muscles! It really enjoyable.

Moalboal fun from tool-trip on Vimeo.

On our return to Moalboal we booked our diving for the next day with Neptune Diving, again no signs of enthusiasm but we were excited. We chose to dive Pescador Island, 3km off from the mainland and it was to be our first dive in the Philippines. Yay!

Underwater is just as good in Moalboal!

The next morning we arrived early to get kitted up and fill out the standard forms. Our divemaster was a little more enthusiastic (Filipino) than the others but not by much, the European vibe had rubbed off on him obviously, haha! We headed to their dive boat, a large bangka with plenty of space and good condition. Unfortunately the small typhoon that hit the southern Philippines was breaking up and moving towards us. The wind wasn’t crazy typhoon wind, but it was starting to pick up and the skies were getting darker and darker.
We arrived at Pescador and tucked ourselves out of the wind. Unfortunately JMs ears decided they didn’t want to join in the fun so he had to abandon the dive for the first time ever. For me the dive was good. Small areas a little destroyed from previous typhoons but for the majority, very beautiful and the visibility very good considering the waves. It was a really good first dive in the Philippines. Although it was great we didn’t get the best vibe from the dive school, especially when they charged JM a lot for not diving. It added to the reasons we decided not dive in the afternoon but mainly because of the weather getting worse. We spent the afternoon in the rain snorkelling just off Panagsama Beach in search of the famous school of sardines. Dive schools advertise it as a must-do dive, but a lot of blogs said just take your snorkel and it’s just as impressive. It took us only 5 minutes to find the spot, probably due to all the divers in the area. It was great sight to see and it’s true that you only need to snorkel to appreciate them.  It’s definitely worth a detour if you have a few days to spare.

Sardines of Moalboal from tool-trip on Vimeo.

There’s so much to do it’s rather overwhelming.

Whilst in Moalboal we were continuously thinking about what to do for Christmas. Where should we go? What should we do? It would be my first Christmas away from home and I hated the idea, even though I was with Jean-Max and we were in paradise! JM wanted it to be amazing for just that reason and we needed to sort a plan out. After talking to locals and fellow travellers our plans continued to change and change. In the end we decided to fit in a short trip to Apo Island before heading to the island of Siquijor for Christmas.

After a whole afternoon and night of torrential Filipino rain, we made our way to Apo Island for the world famous diving sites and turtles!