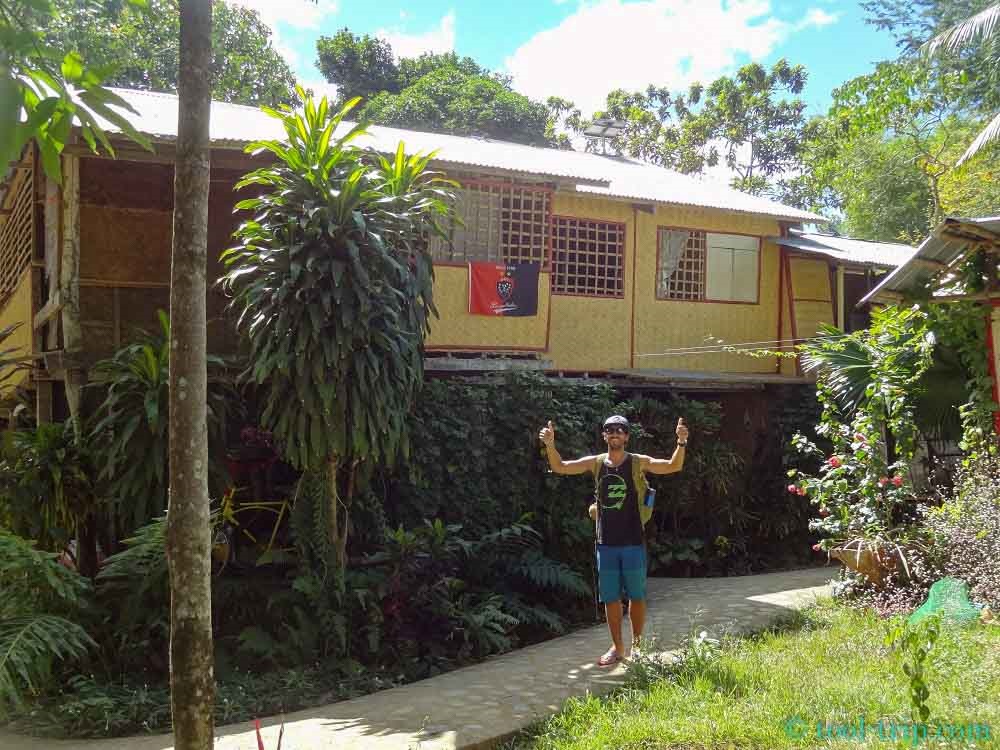 White sandy beaches and turquoise waters were on the menu at our next destination, a complete change to the rugged mountains of north Luzon. Before we could enjoy it all, we had to wait for our flight to Puerto Princesa the doorway to Palawan.

After the most horrendous night bus from Baguio we arrived at Manila airport 12 hours too early. Believing we could pass the time easily in the terminal was not a good plan. Manila domestic airport terminal consists of 2 big rooms and that’s it!! I thought I would try my luck and see if AirAsia could move us onto an earlier flight. There are around 5 a day and 2 more before ours. The lovely check-in desk lady pulled a few strings and moved our flight easily with no questions asked. Our flight was at 10:30am almost 6 hours earlier. Thanks Air Asia! We even got given priority seats with extra leg room a great welcome after a long uncomfortable, sleepless night.

JM closed his eyes for a few seconds and that was it for the rest of the flight. Fast asleep. I on the other hand enjoyed the scenery; flying over the beautiful archipelago of Busuanga and the Bacuit north of Palawan. We would be going there soon!

As soon as we stepped on the tarmac we felt the change in environment; 40 degree heat and that was not an exaggeration.

Walk away from the airport!

Like usual we abandoned the invitation of a highly expensive tricycle ride to our guesthouse and preferred to use our feet and flipflops instead. 10 minutes later and 10 minutes healthier, we made the acquaintance of Ray, the famous owner of Ezy Stay Pension in Puerto. Friendly and welcoming we chatted for over an hour before asking for a room. Unfortunately the room he offered was a little more expensive than we expected but it was all he had left. It felt like an abandoned dormitory. Three bunk beds covered in cobwebs, spiders, ants and a cockroach as our neighbour. Definitely not worth the money we paid. We only needed to stay one day and after dropping off our bags we went to explore the town for the afternoon. There’s really not a lot of things to see and do in Puerto itself. The beaches were a little distance away from where we were staying, they weren’t that great for swimming apparently and there was a fee. Instead we walked to the town centre, ate, took money out, and tried to come up with a plan on what to do during our two and a half weeks on the island. 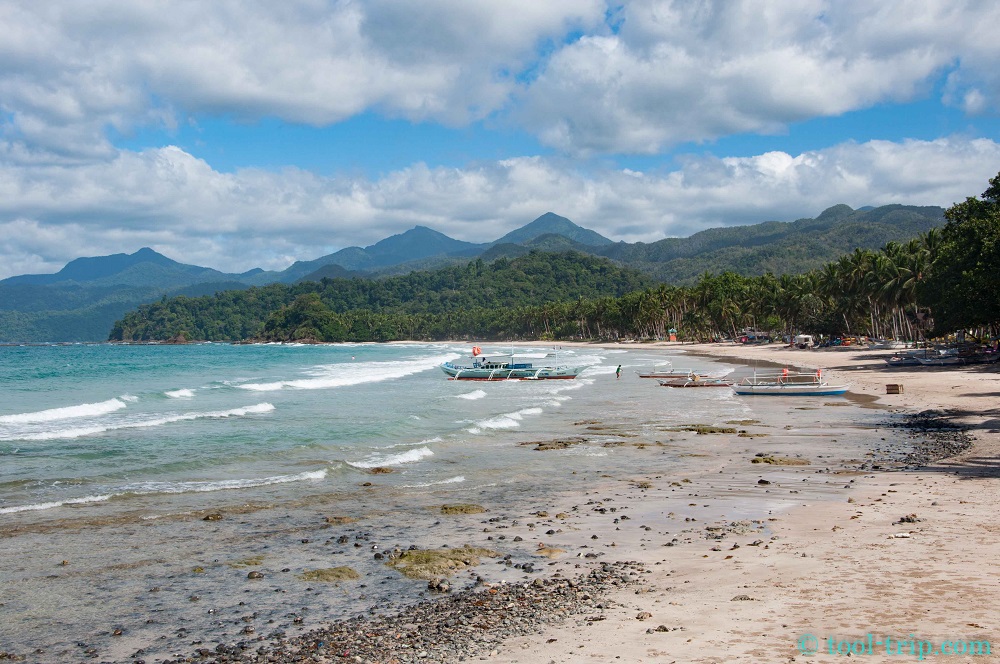 A few people had recommended to us to check out Sabang, a small village and the disembarkation of bangkas to the famous underwater river, a UNESCO world heritage site. Although a huge tourist attraction the village remains calm and quiet for the rest of the time. We decided to attempt couchsurfing for the millionth time, previously we’d always been unsuccessful. This time however someone finally wanted to host us! Yes!! Our host Sheena was actually in Puerto for work, we arranged to meet for dinner and exchange keys for the following day. Sheena was lovely, lively and bubbly and she suggested we stay for 2 days = Perfect. We were looking forward to discovering Sabang through the eyes of a true local. 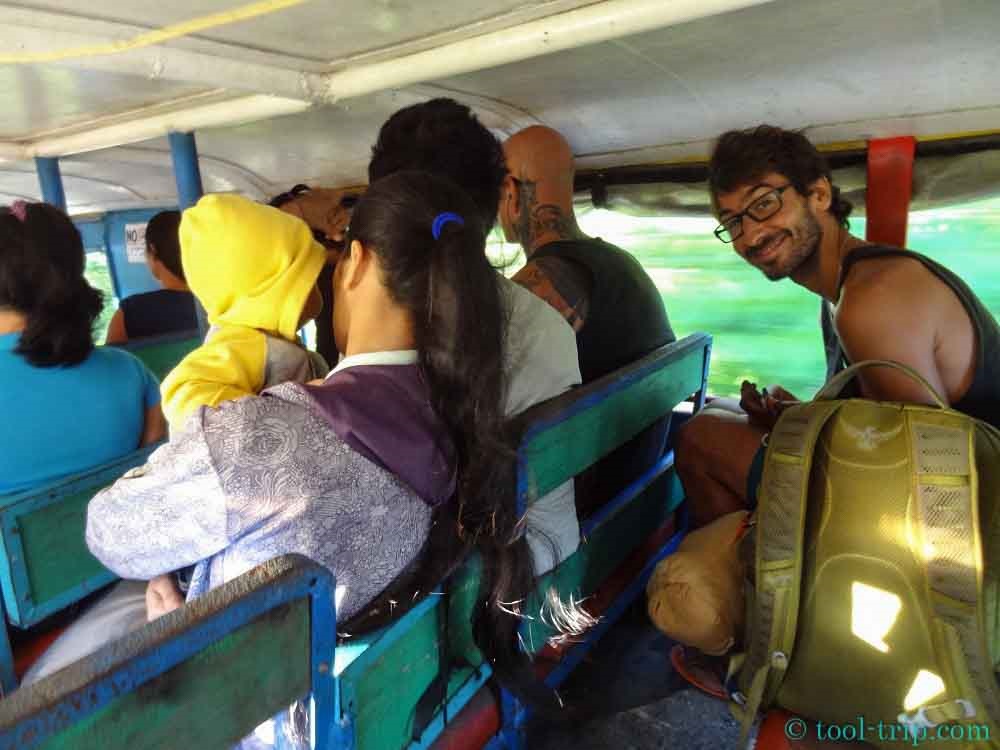 The next morning we set off for Sabang, key in hand. Ray offered to look after one of our big backpacks for two weeks so we took to the road lighter than usual. We took a tricycle and then jeepney to the main bus terminal. We arrived at 9h30 and the next bus wasn’t leaving until midday, not even guaranteeing that. We love the Philippines!!! Sheena however, had spoken about the Lexus van service to and from Sabang, 50 pesos more expensive but more comfortable and quicker. We managed to find the tiny van terminal just in time for the 10:30am departure. Only 2 places left, phew! Two hours later and what felt like severe internal organ damage and bruised knee caps, we arrived at cafe Sabang. It was here we were told to ask for Silay, a friend of Sheena’s who would show us to her place. 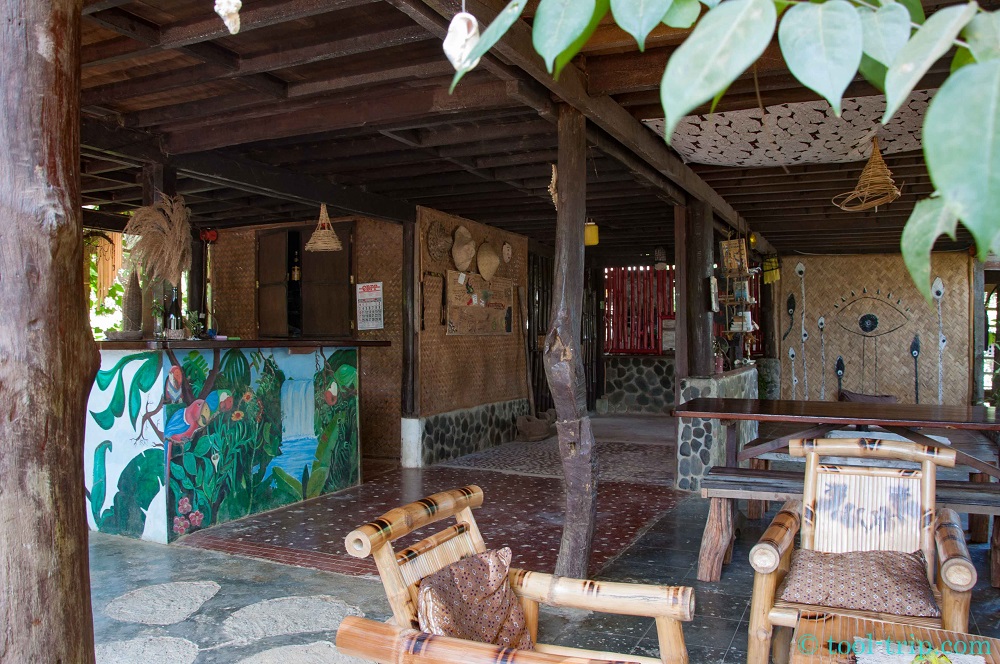 To our surprise, at the entrance of the café, a rugby club Toulon flag was proudly hanging! Amazing!!! In a tiny village in the middle of a tropical island in the Philippines, fans of RCT! Better than that Silay and her family spent 10 years living in and around Toulon. The café was really cool with a great vibe. Silay was the perfect host and her mum great entertainment! The food they provided was delicious. They never had what was written on the menu but they always proposed an alternative option. Each time it was delicious and perfectly priced. After a good lunch Silay showed us to Sheena’s home. Not quite what we were expecting, but it still, it was Sheena’s home and we loved that she had allowed us to stay. 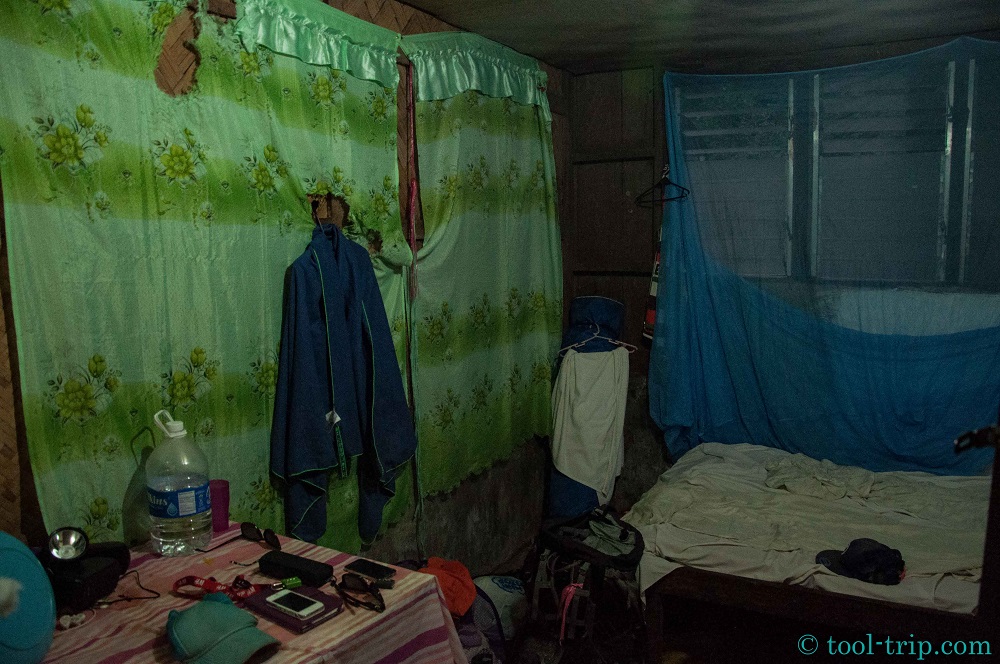 Chickens, dogs and pigs neighboured her building which was home to a small community. Walls made of plywood and furniture of bamboo we made ourselves at home. A great experience. 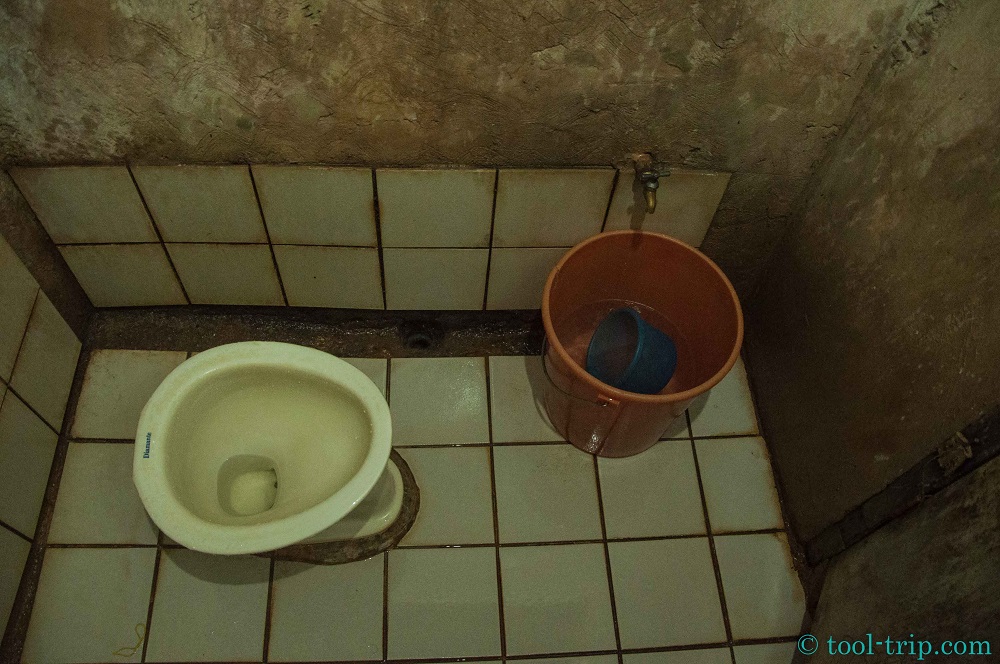 We ended up spending 2 nights at Sheena’s. Unfortunately she had issues regarding work in Puerto and never got round to showing us her favourite spots. Not a problem we explored ourselves and loved the place.

We spent the first afternoon enjoying the great beach in Sabang; golden sand and crashing waves, our favourite type of beach. We also needed to sort out the permit necessary to visit the famous underwater river, without it you can’t go and you’re not recommended to just turn up expecting to visit the river then and there.

UNESCO time – Another marvel of the world

You need to apply for it the day before at the earliest either in Sabang or in Puerto Princesa. To apply we wrote our names on a piece of scrap paper and left it with them ready for the next day… Mmmm….. Not exactly professional!!! After applying for the permits and some serious body surfing in the waves we enjoyed watching the sunset with a cold beer in hand. Not bad! 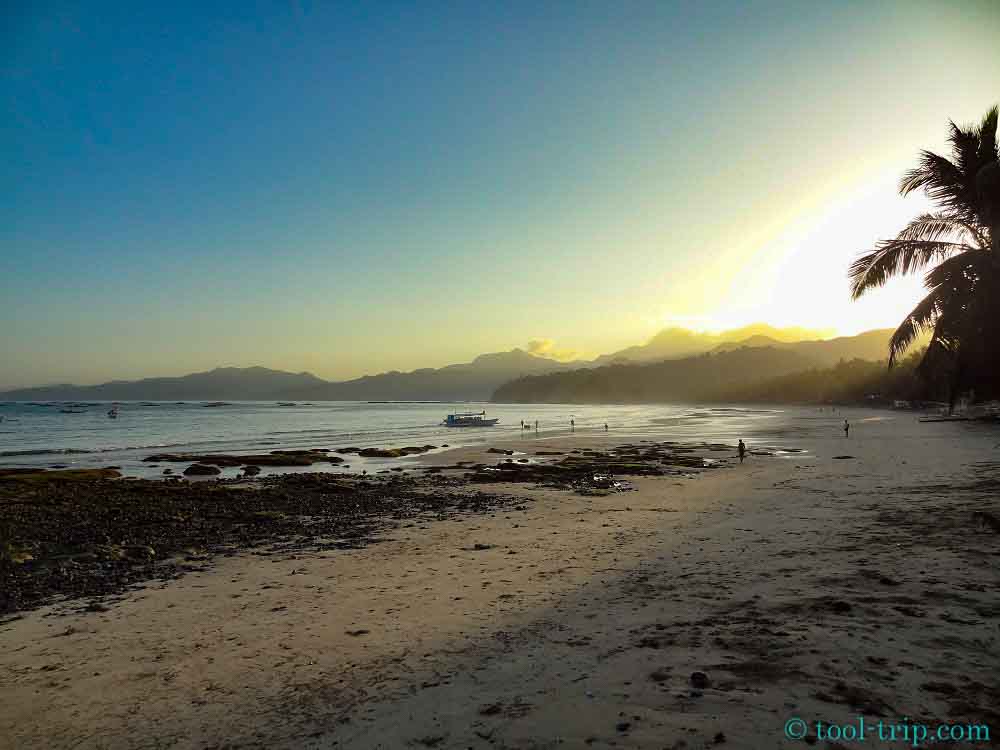 The next morning after sleeping on what felt like a wooden plank, we were ready for our second UNESCO heritage site in two weeks – The underwater river in Palawan! The river itself runs under and through limestone karst rock and is approximately 8kms long before reaching the ocean; only part of the 8km can be visited by tourists. 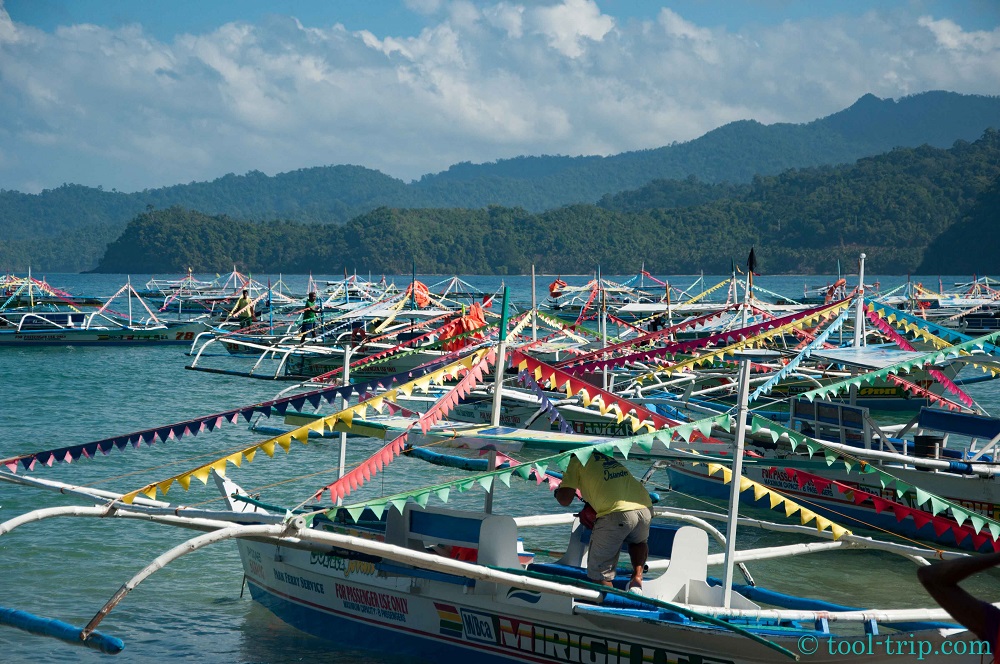 Boats taking us along the coast

At 8am we arrived at the small port in Sabang and joined the queue to collect our permit and pay the entrance and environmental fees. Even at 8am the tourists were arriving in droves. We’d been advised by locals, guides and blogs to arrive at 8am before the daytrippers from Puerto Princesa arrive. What was it going to be like in a few hours! We paid the first lot of fees and it was here we arranged to join a Danish family of 4  and form the maximum group number of 6 – reducing costs. After paying the first fees we then joined another queue to organise and pay for a bangka. It was the bangka that took us on the 15 minute boat ride along the coast heading north of Sabang and into a small protected bay to visit the river. 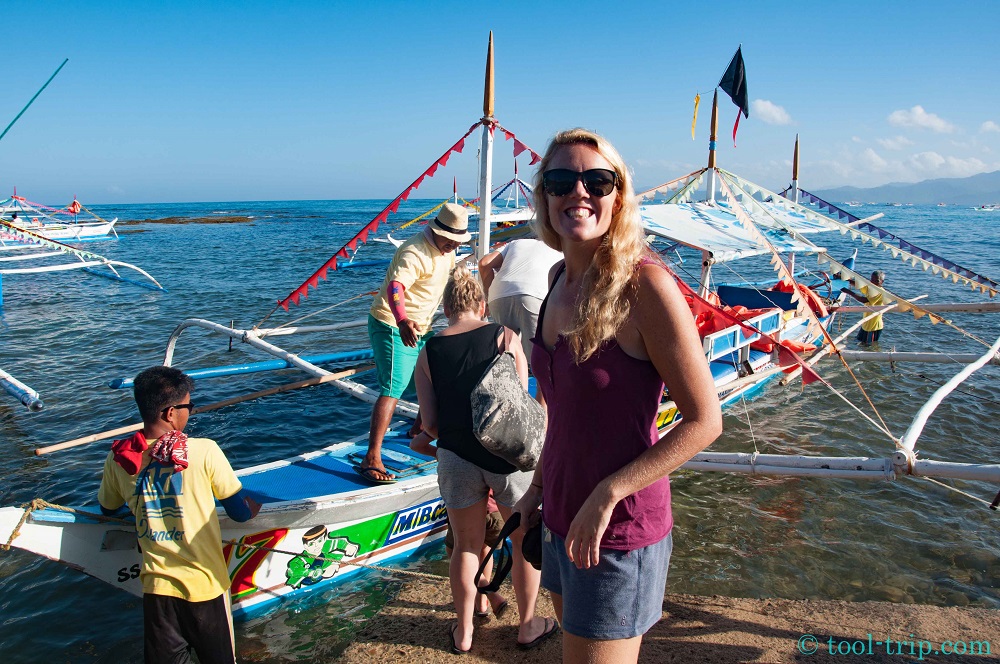 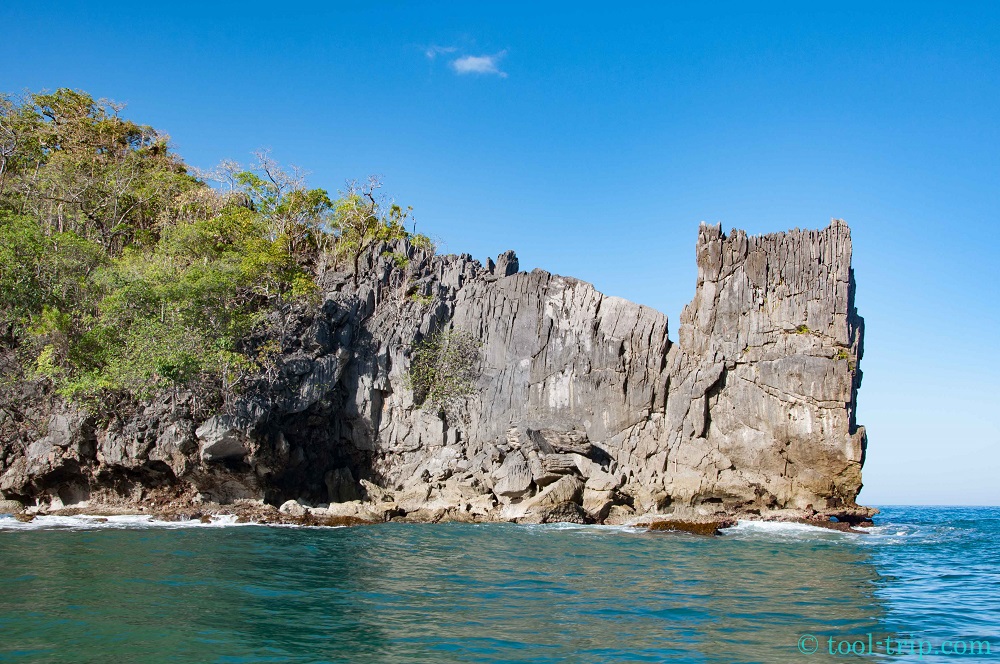 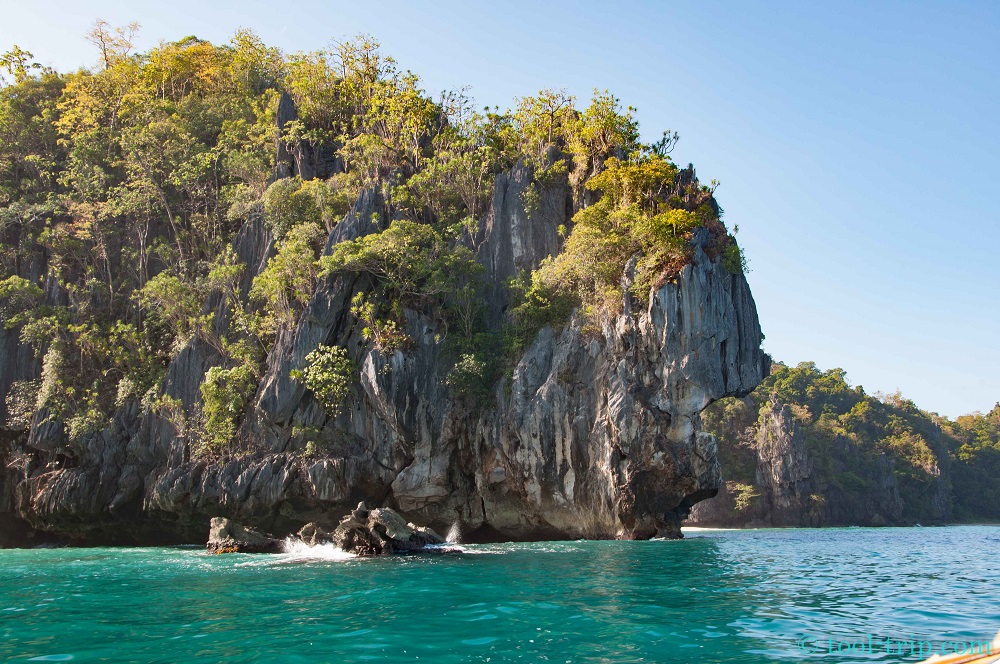 We disembarked from the bangka, walked 150m, got given swanky audio guides and changed to a bath tub style boat. Equipped with hard hats, lifejackets and torches we were kitted out and ready for an extreme boat ride. Instead it felt a little like ‘It’s a small world’ disneyland ride just without the bright coloured dancing dolls and the really annoying music. 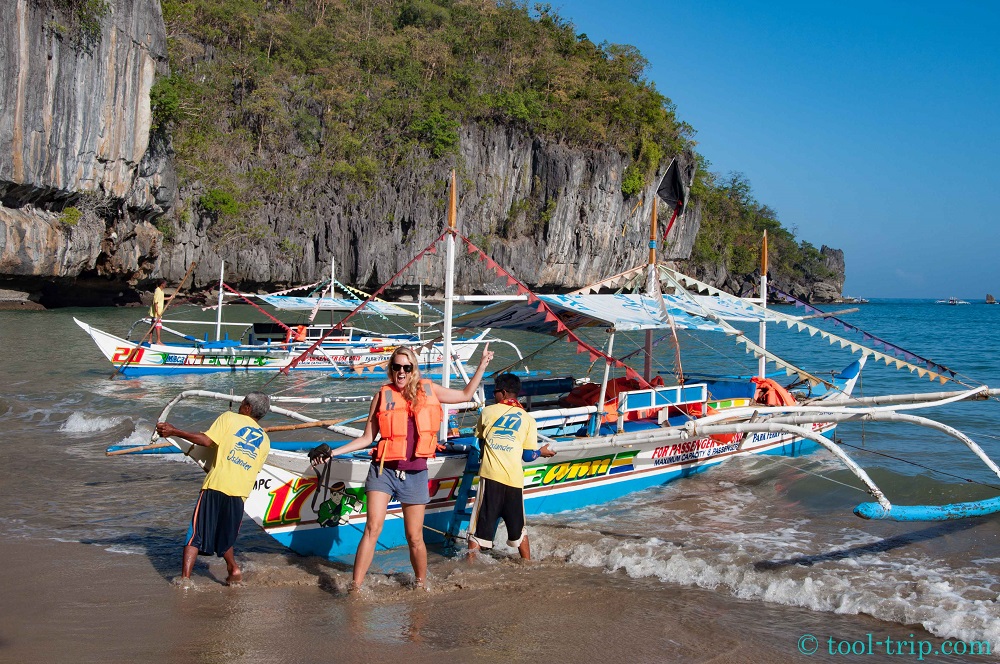 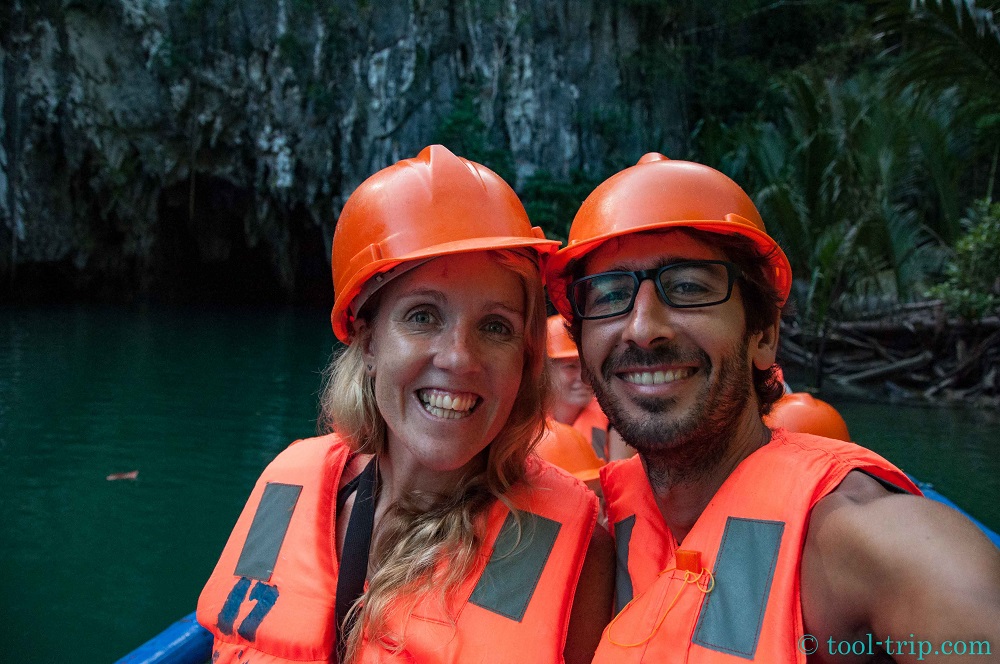 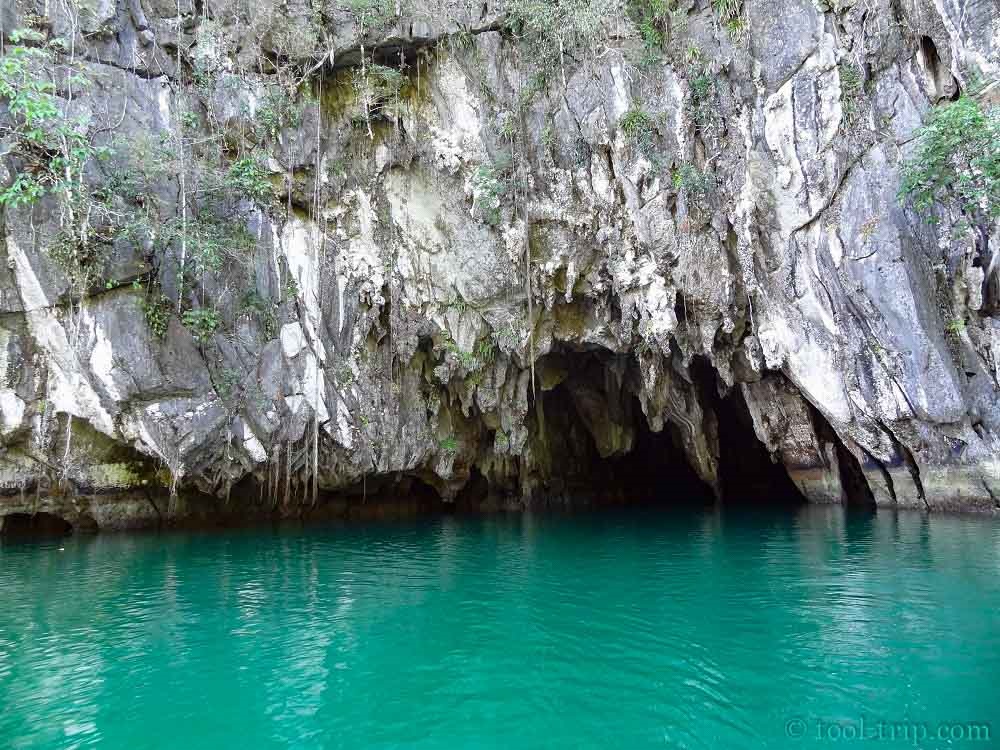 We had a new guide who paddled us into the cave along the river. For an hour we glided quietly along the river through huge caves and under beautiful stalagtites and bats. The first thing we were advised to do was keep our mouths closed at all times because bat poo is very toxic and if any lands in your mouth you’re likely to get a little sick! Yuk! Once inside the cave everything seemed very calm. There seemed to be only 4 or 5 bath tubs on the whole of the river. It was a really nice experience. It wasn’t until we exited the cave that we saw 50 or so people waiting for a bath tub. We came at a good time. 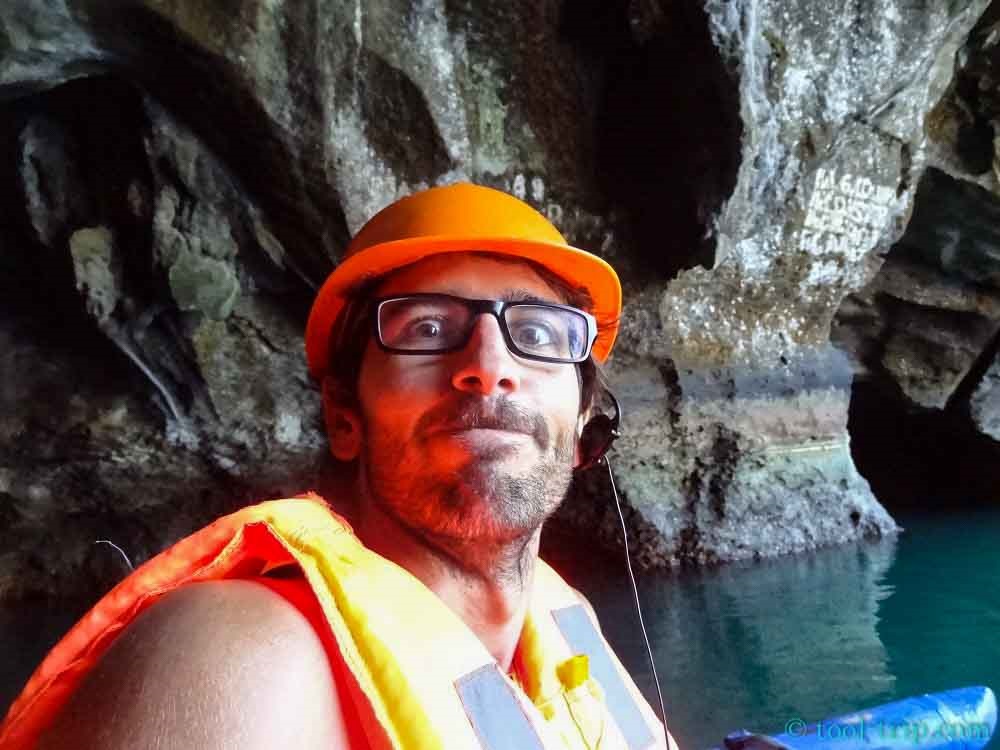 Close your mouth so you don’t eat bat poo! 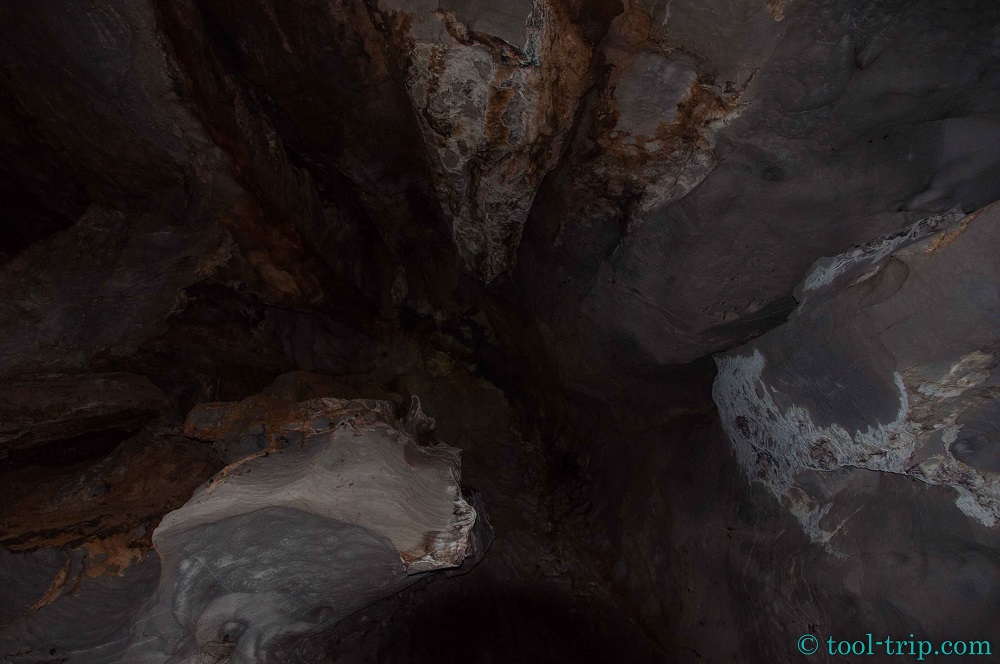 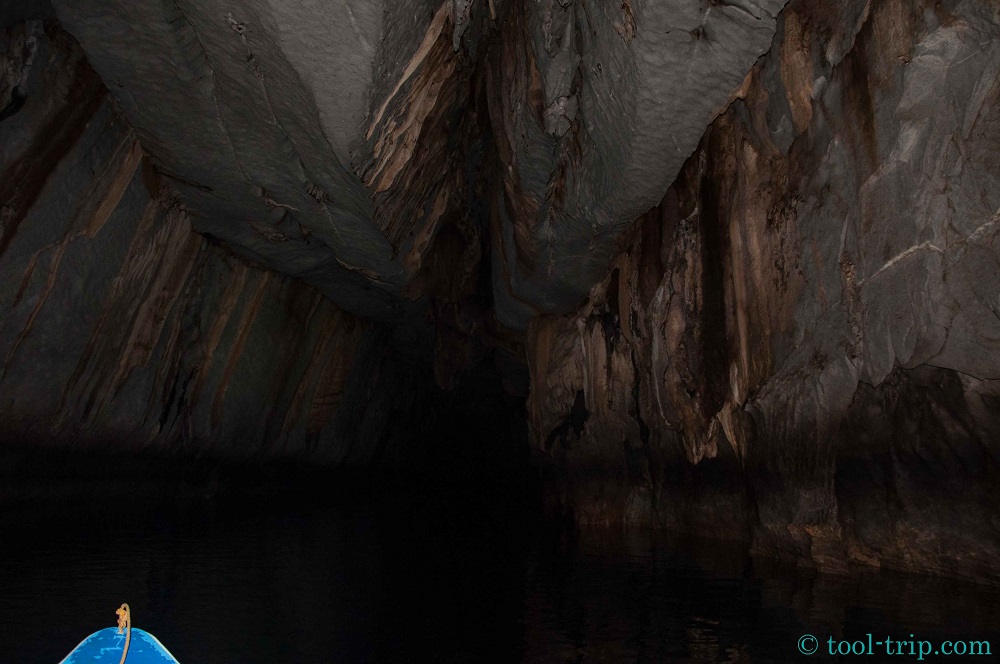 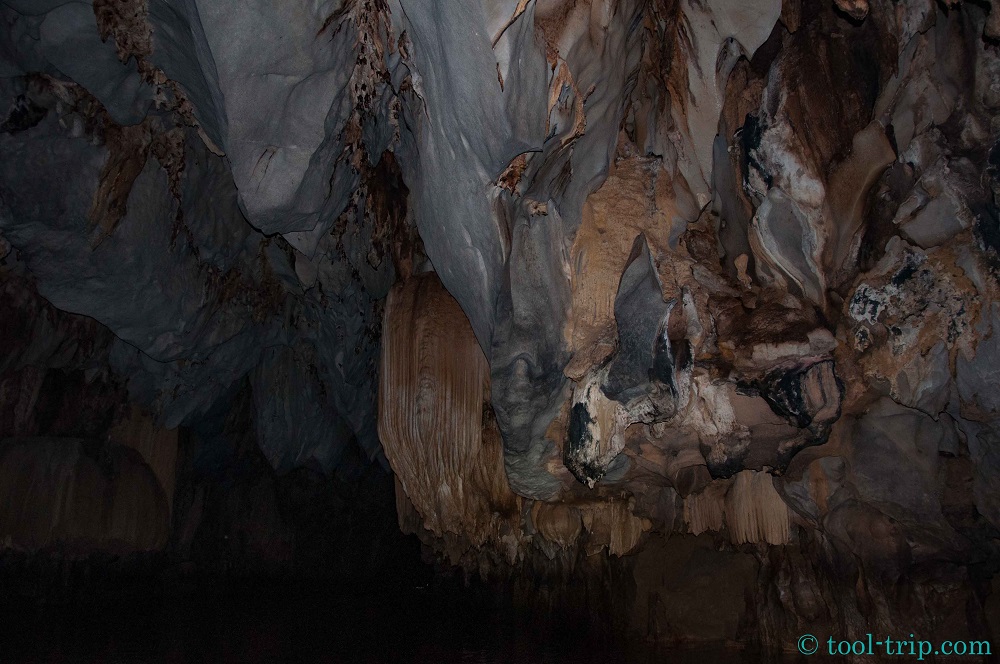 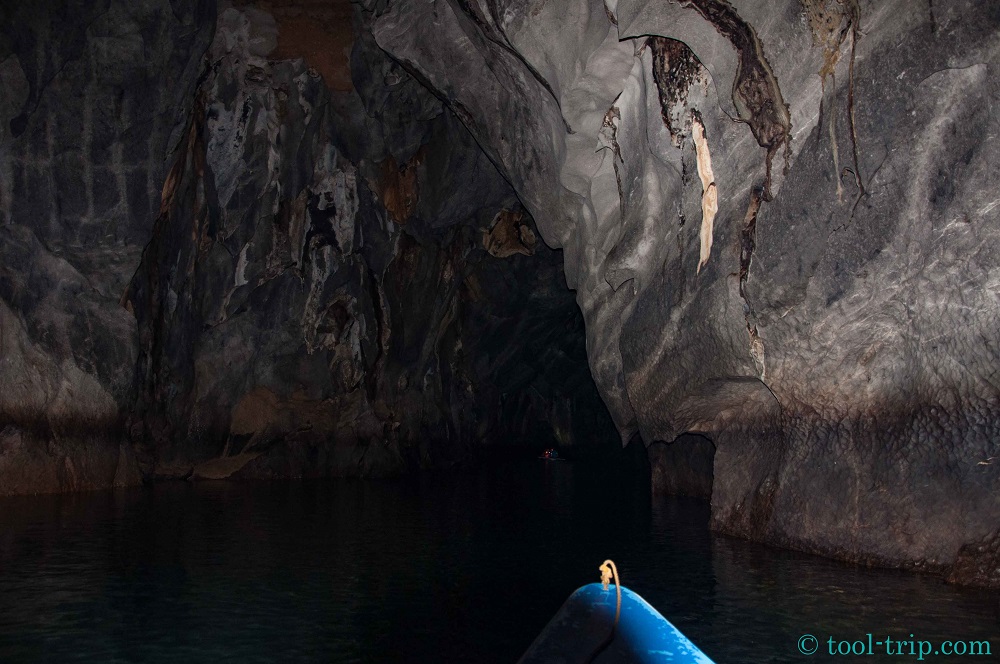 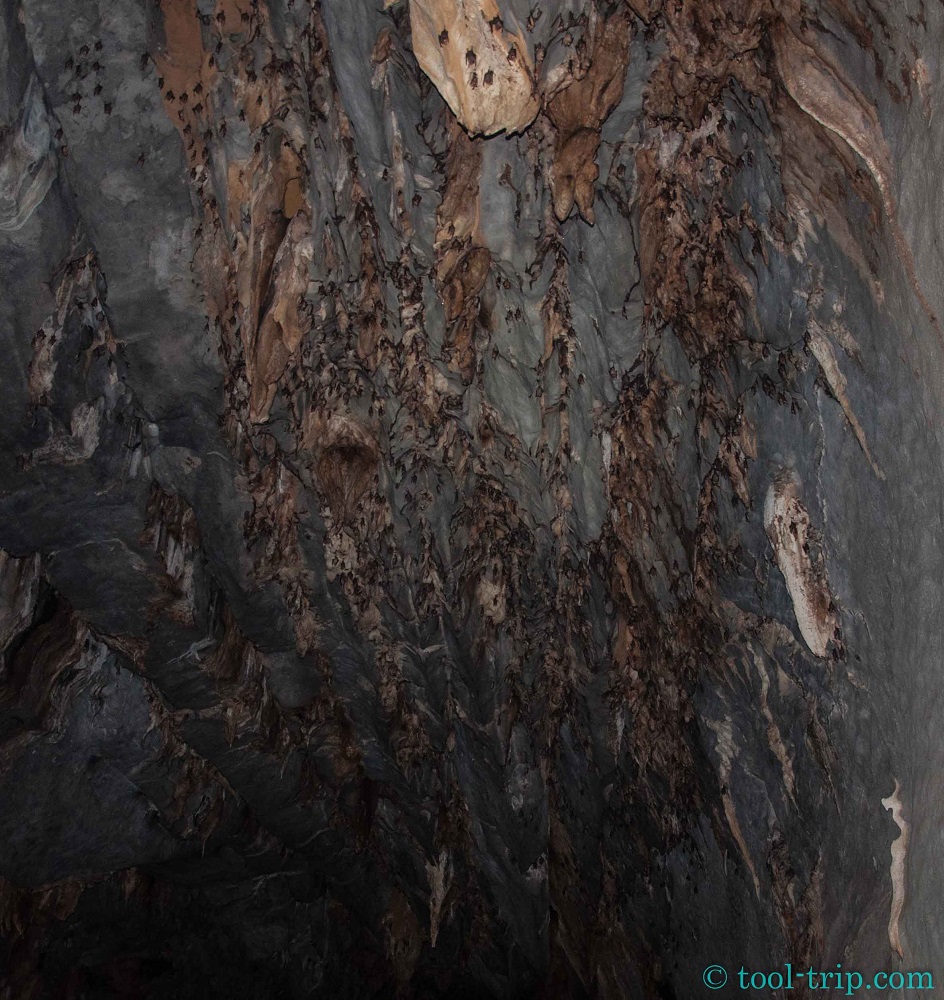 Sorry for the lack of photos, we’re having too much fun! 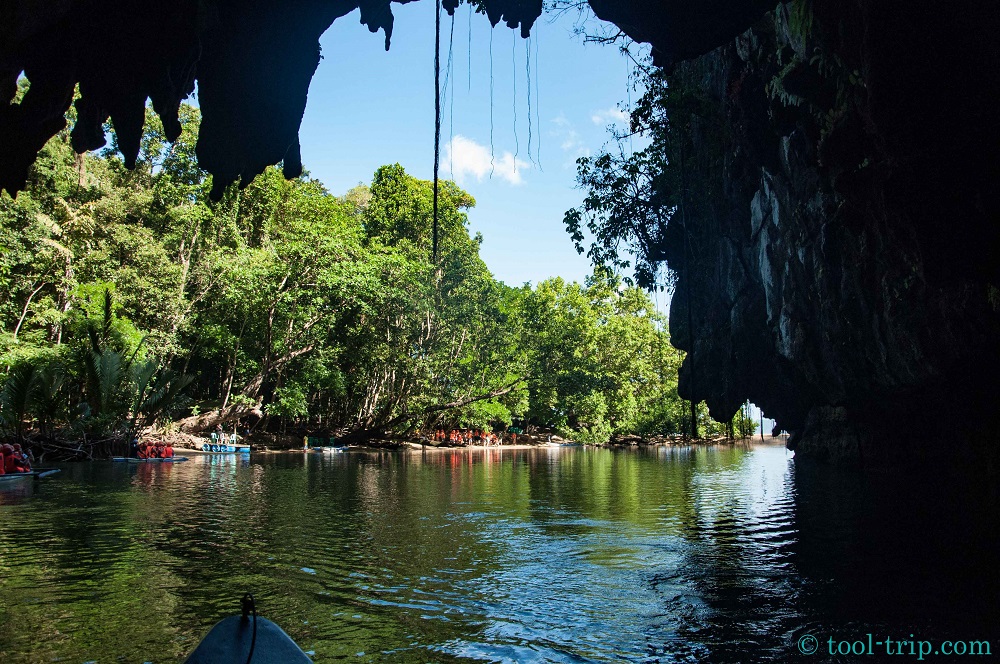 The wooden walkway between the bath tub and bangka was through lovely jungle and mangroves, a place where you could see a small glimpse of the diverse fauna and flora in the area. It was here our captain of our bangka took us around the back of the tourist building near the entrance to the river and showed us some seriously territorial macaques and incredibly the Monitor dragons. They looked just like mini Komodos but are less toxic.  We could approach them a little closer without disturbing or agitating them so we took a lot of photos! 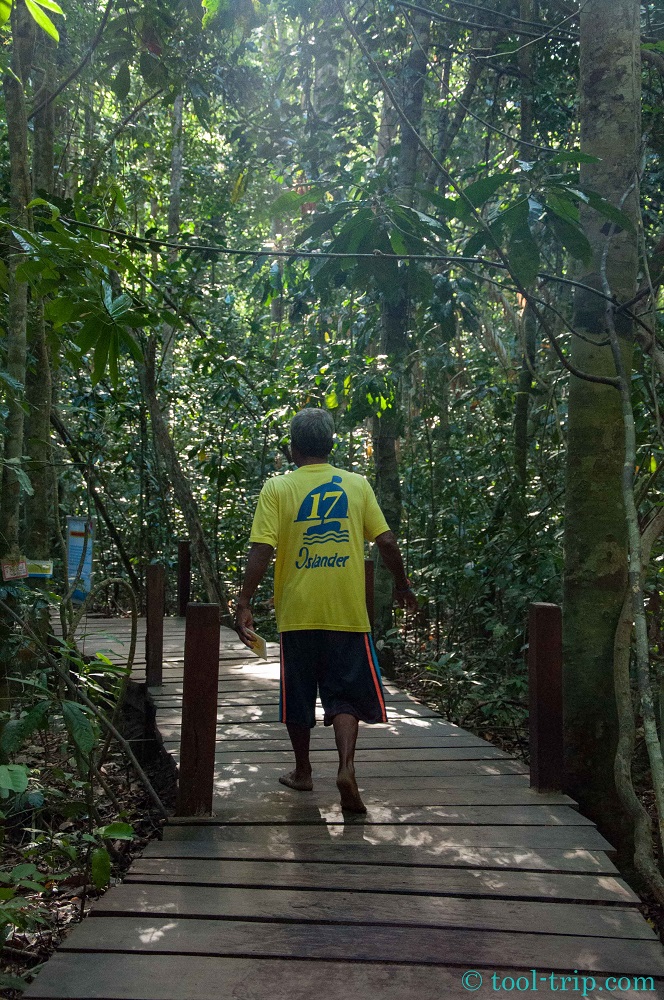 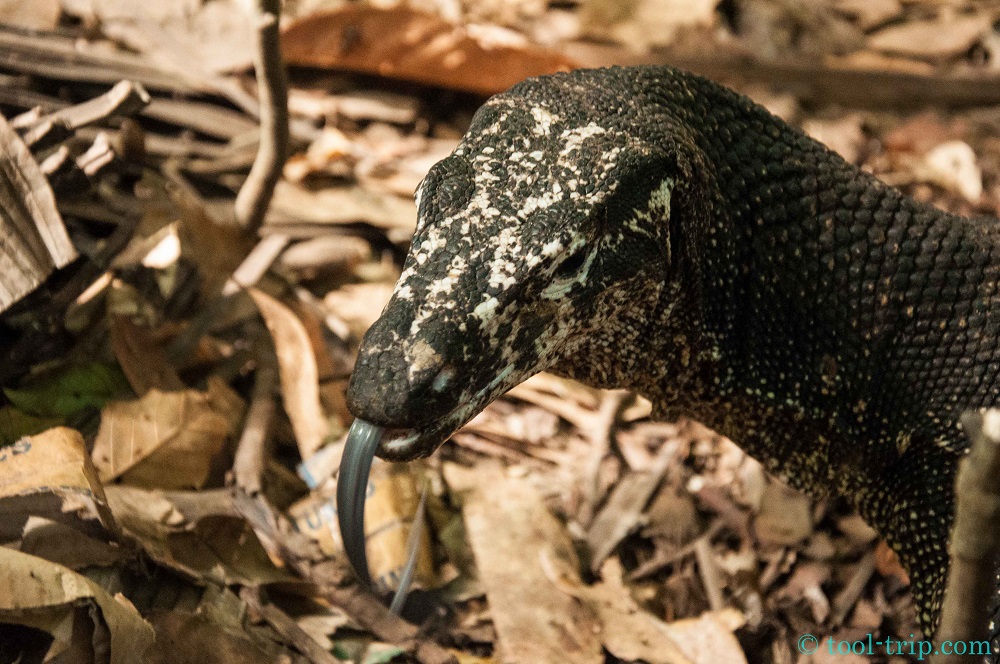 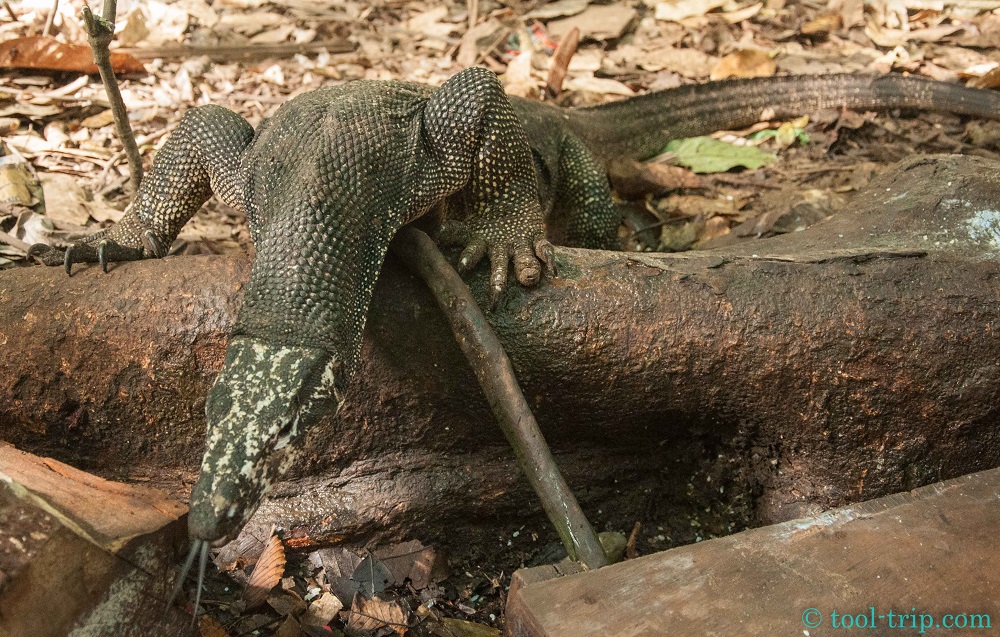 We were really surprised how enjoyable the whole underwater river experience was: we were worried it wasn’t worth the money but it totally was. We saved a lot of money doing it ourselves, not taking a day trip from Puerto Princesa and staying in the small quiet village at night. Café Sabang advertises a double standard room for only 450pesos!!

As we returned to port at the end of our underwater river tour more and more tourists were arriving and having to wait for bangkas. All 25 or so bangkas were full and shipping us tourists to and fro. We returned to café Sabang and refuelled with a phenomenal breakfast. With a new found energy we decided to tackle the Sabang waterfall, a small 2 kilometer each way walk along the shore. We arrived to a very unimpressive waterfall. No power, height or plunge pool to swim in, a big disappointment, especially after a difficult walk over unstable rocks and boulders for 80 minutes. Next time we’ll be wearing shoes not flip flops! On the plus side there was no one and it was a little adventure exploring south sabang. 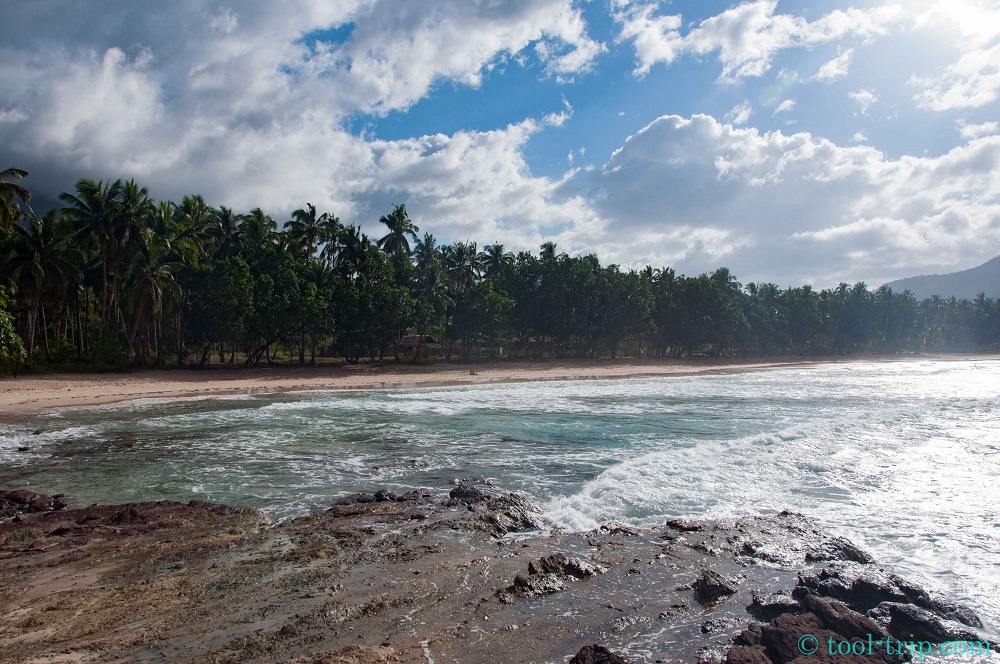 We ended the afternoon visiting the ‘secret’ beach mentioned to us by both Sheena and Silay. The beach was just tucked around a small headland next to the main village beach. It was deserted with only a few tourists zip-lining across the small bay. The zipwire was slightly offshore and fun to watch. If there weren’t the sandflies feasting on JMs, we could have stayed for hours!