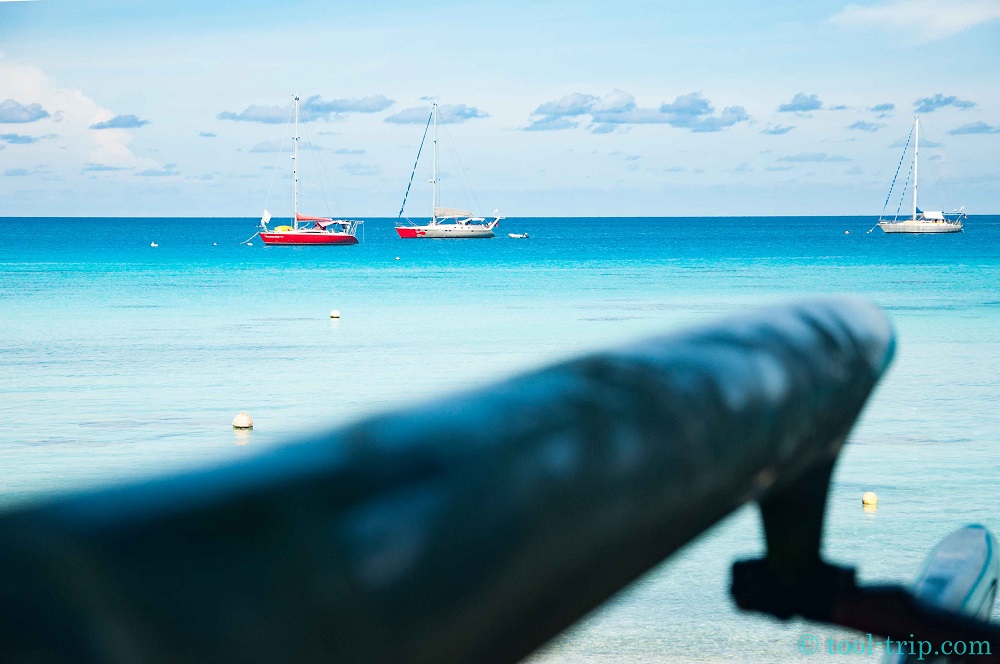 Rangiroa is the second largest atoll in the world and the next stop on our Tuamotu adventures. On arrival we were met by the lovely Lea and Loic the owners of Rangiroa Plage Pension and Camping, and where we were to spend the next 5 nights (camping). 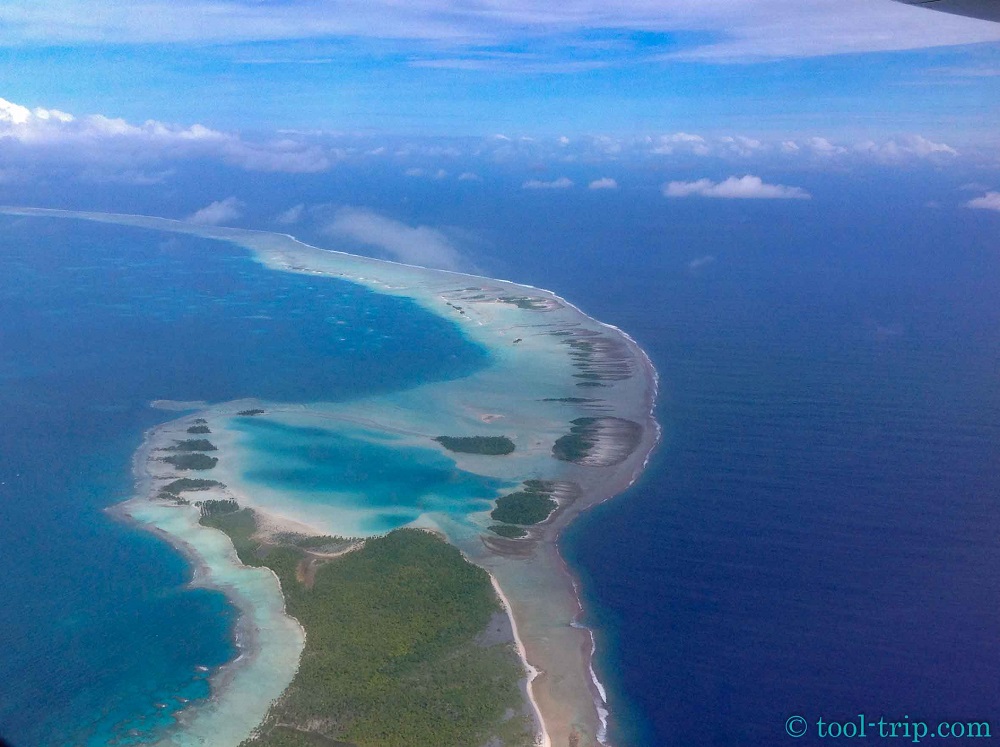 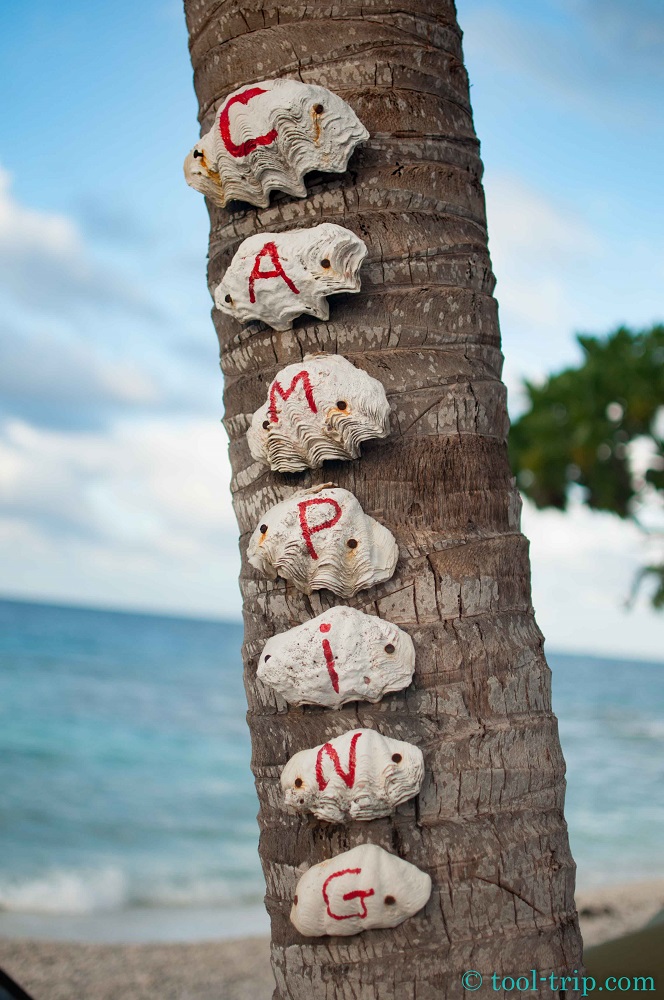 The sun was shining the temperature high and the camping spot incredible….. again. There was already one other tent set up by a lovely couple, Baptiste and Laetitia, and they had actually already heard about us from Pascal in Tikehau! The camping offered free kayaks, snorkel gear and bikes…BONUS, so as usual we jumped onto some bikes and went off exploring. 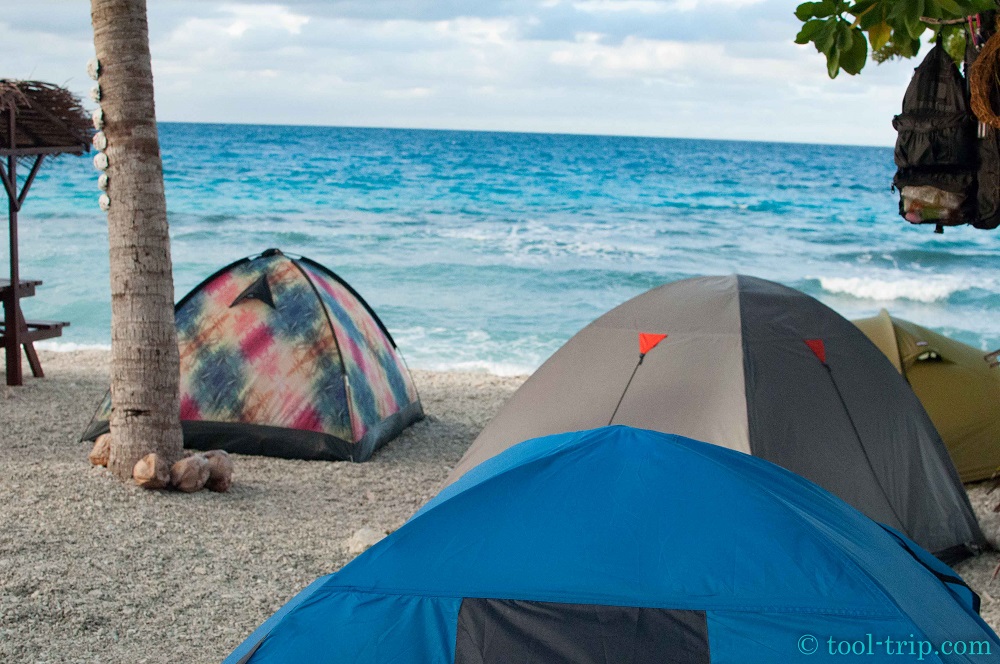 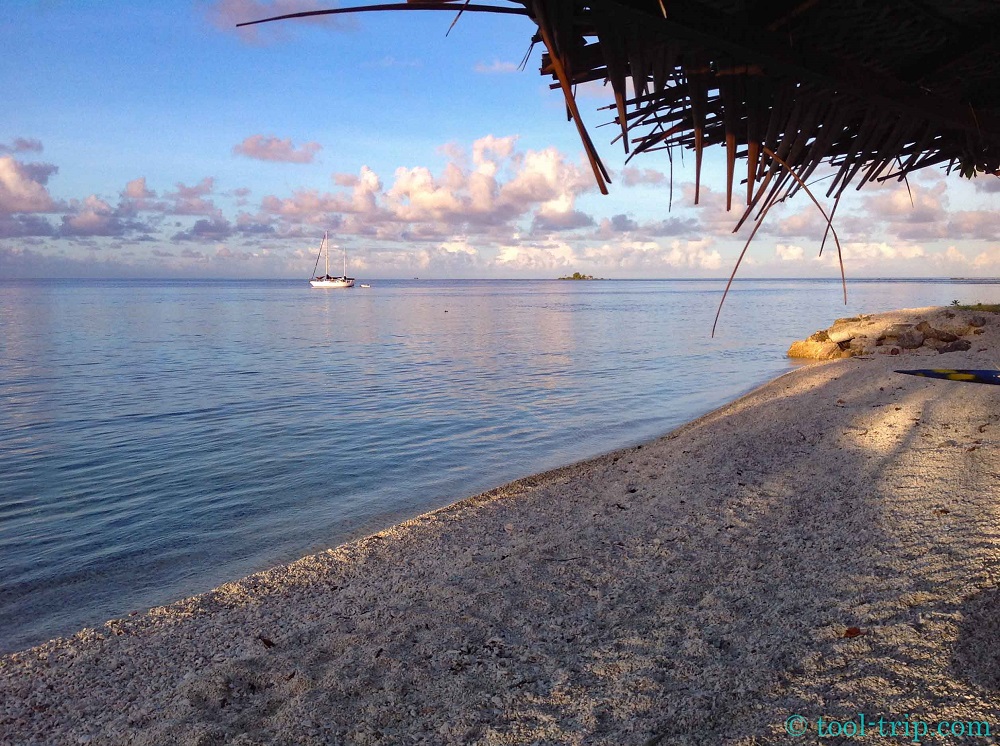 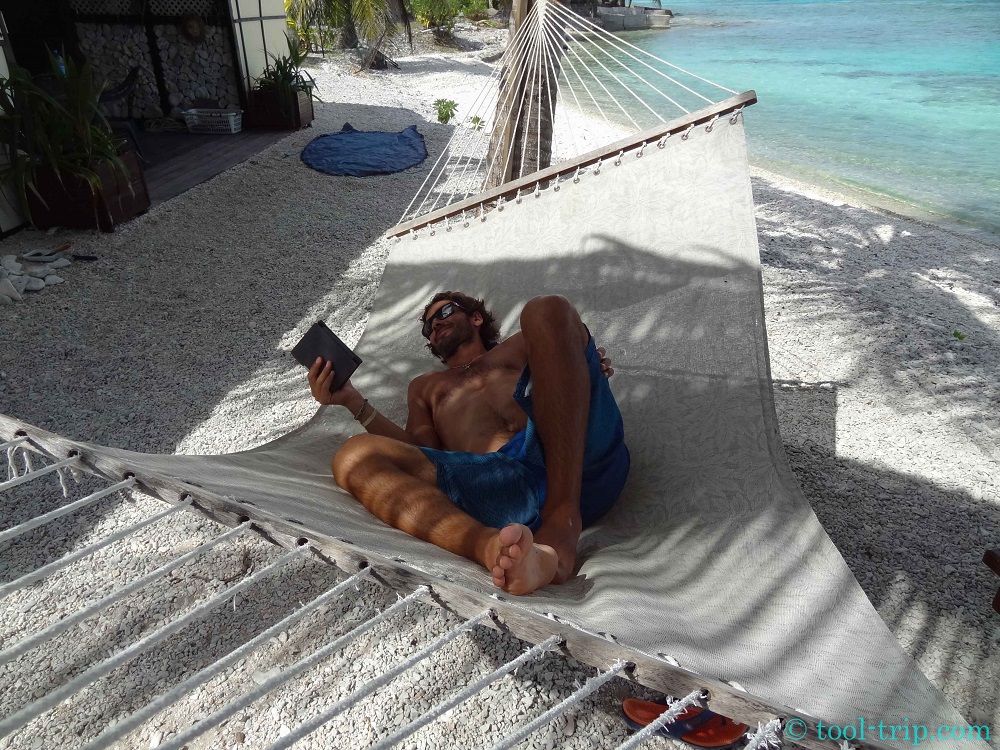 The main land mass of Rangiroa is only approximately 10km long so it didn’t take us long to cover almost half of it on the first evening. We ended up at the local sports field where they were throwing javelins at coconuts and running laps. The javelin throwing was brilliant to watch. The coconut was miles away and so high up. The guys were sort of under arm throwing bendy wooden javelins at it. It really was a skill. If anyone missed they had to do 10 press ups! For the first evening and not very motivated to cook, we ate at the snack bar adjoined to the camping also run by Lea and Loic. It was bliming delicious. Fresh tuna with the most incredible lemon sauce! The dish size was so big we ended up sharing and finished it off with the best chocolate mousse ever!

Rangiroa spirit from tool-trip on Vimeo.

Diving is fun! Everyone should give it a go!

For our first full day we decided to find a dive centre. Rangiroa is also very famous for its underwater life and therefore a must for us to get in the water ASAP!  All dive centres, and there’s a lot of them unlike in Fakarava, provide a free pick up and drop off service for the clients making life a lot easier. On our first morning Yaka Plongee came to pick our friends up for a dive and we enquired whether they took the pass we had etc. We immediately took a dislike to the lady who was not at all enthusiastic and we left it at that. We won’t be diving with Yaka then. We got on the bicycles and cycled to the end of the Rangi road. Unfortunately it was nothing like Fakarava’s Jacques Chirac road. It was pretty darn bumpy and uncomfortable. Anyway……at the end of the round we found Eleuthera Diving, a centre that took our diving pass and with a lovely lady at reception and a friendly divemaster who greeted us. Unfortunately the manager/owner wasn’t as nice. He was one of those stereotypical French divers that JM and I dislike with a passion and who thinks French divers are the best in the world, all that matters is the level you are at and if you have a PADI qualification you are the lowest of the low. There was no “hello” from him, “how are you?” It was just “what level are you?” Something that irritates me more than anything since everyone should be welcomed and encourage to try diving out. Anyway we left that dive centre and knew we wouldn’t be diving with them either. Never mind, there were still another 7/8 centres to try. Next centre – 6 Passengers. The vibe here was totally different, they were welcoming and they all looked like they were having fun working there. They didn’t even ask me what level I was until 10 minutes into the conversation. Hallelujah! By the end of the chat we had booked a dive for later that day at sunset. That’s how diving salesmanship should be done! 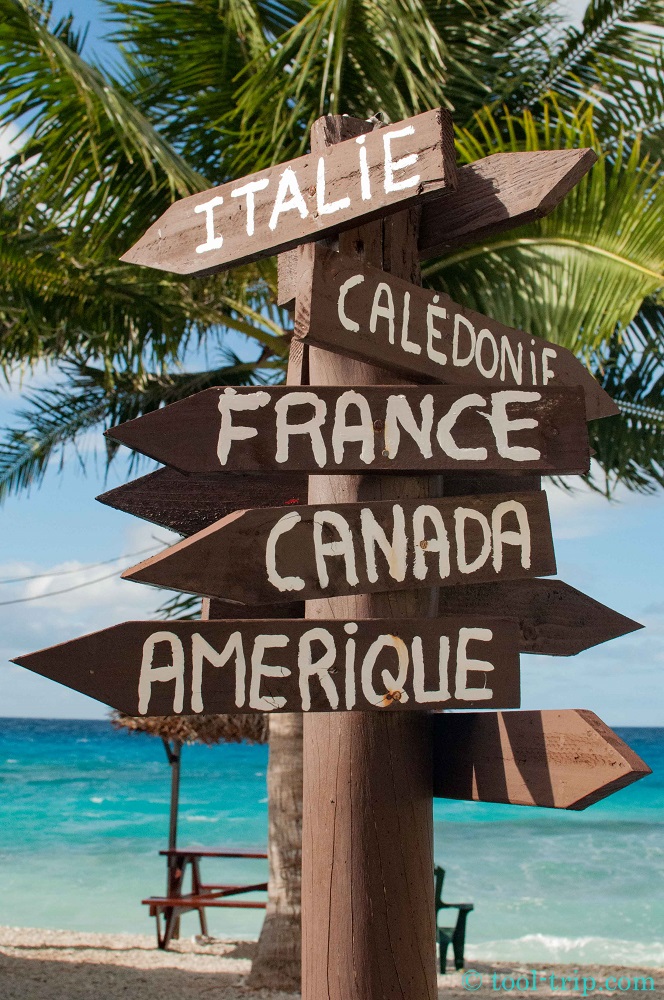 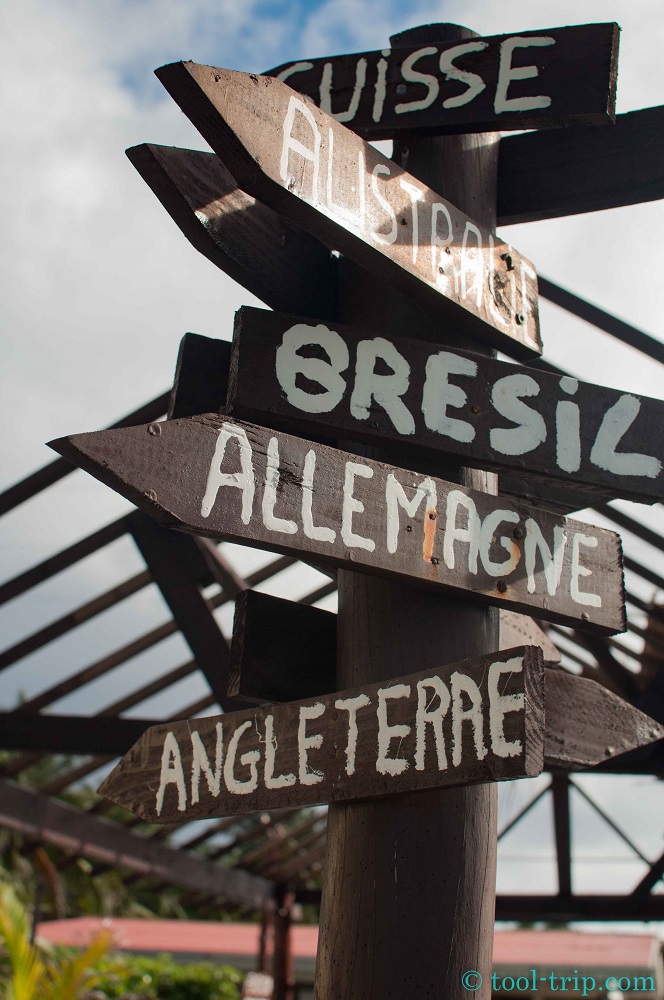 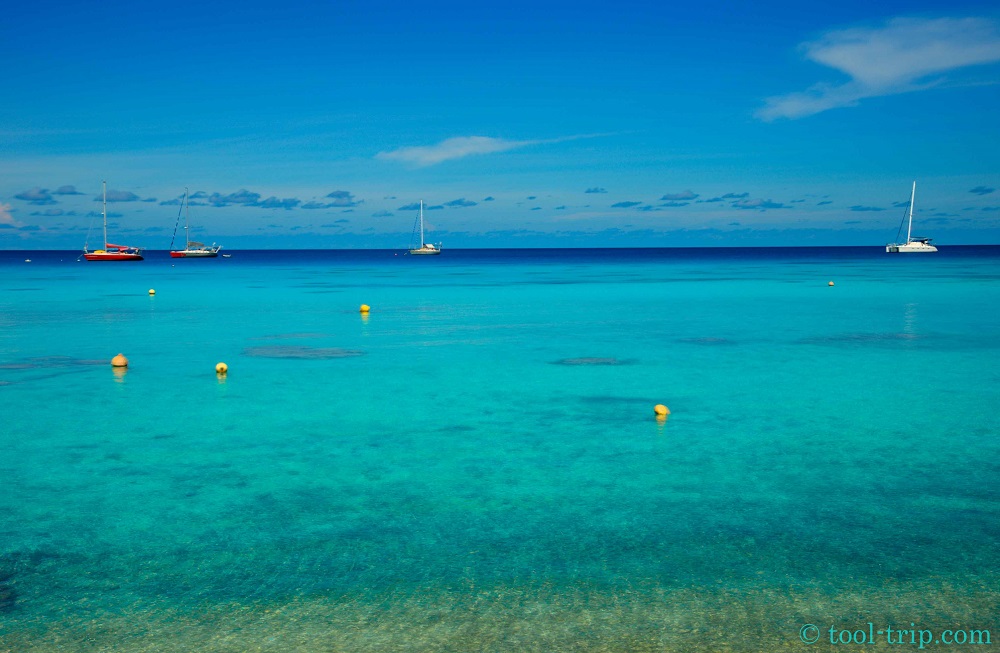 Free pick up late afternoon, kitted out and raring to go I did my first dive in the Rangiroa’s Tiputa pass. It was brilliant. At sunset fish tend to come closer to the surface, making a larger density and diversity of fish. Add to that the majority were reproducing – everything was going off everywhere. It was chaotic but beautiful. There was only a very weak current and the dive was the perfect way to end the day. I liked the dive school so much we booked me on two morning dives the next day. JM was not feeling very motivated to dive so chose to skip the diving but join us on the boat instead. 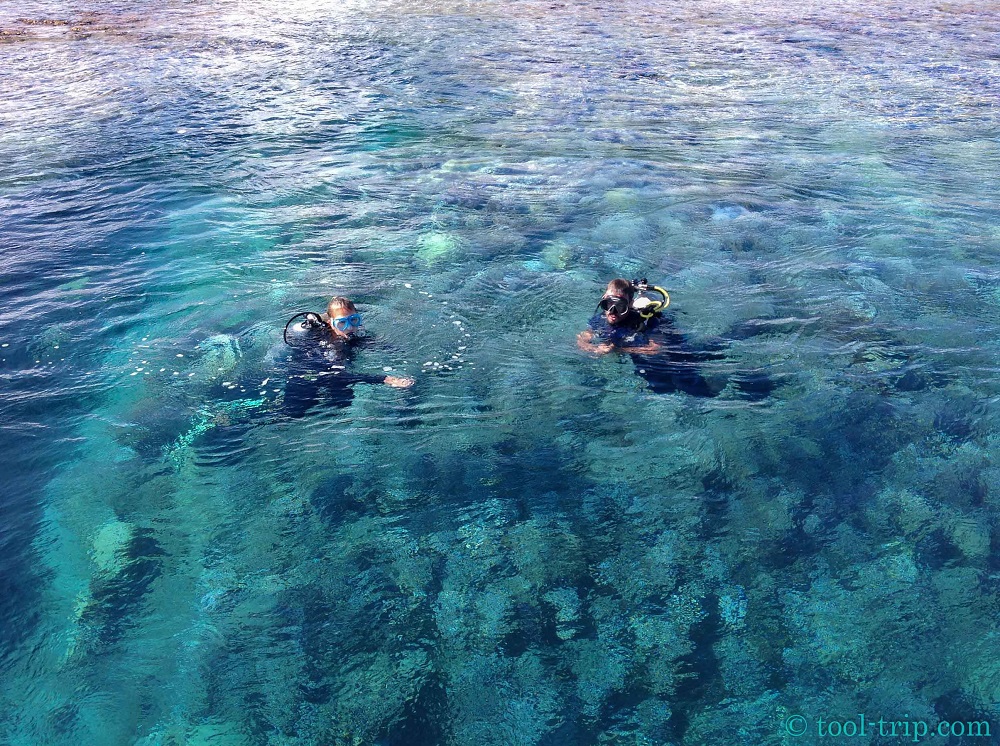 Me diving! I think the visibility is going to be good!

The pick-up was early, 7:30am but we were ready to go. The first dive ended up being only 3 of us. A pro Japanese photographer, the divemaster and myself. I love small groups! We were actually the only ones in the water diving, there were no other dive centres about. We left JM on the boat with the captain and headed down for our first dive. It was another incredible dive but it was pretty chaotic again. There were a crazy amount of fish again but this time the currents were paying havoc. We were flying left then right then left then right. There was even a small vortex. I’ve never experienced anything like it. I felt very safe with the two guys though and just followed what they were doing and trying to stay as close and at the same depth as them both. I’ve never had to hang on to rocks before while my body flies in the opposite direction. Anyway……. With everything happening I was still enjoying the moment and it got even better when two hammerhead sharks swam passed us. They are normally found more regularly at 50m and we were only at 20. Yes!!!! What an experience. They were truly beautiful but unfortunately they swam past us so quickly (or it might have been the current) that we couldn’t appreciate them for longer! 8 seconds is better than 0!!! 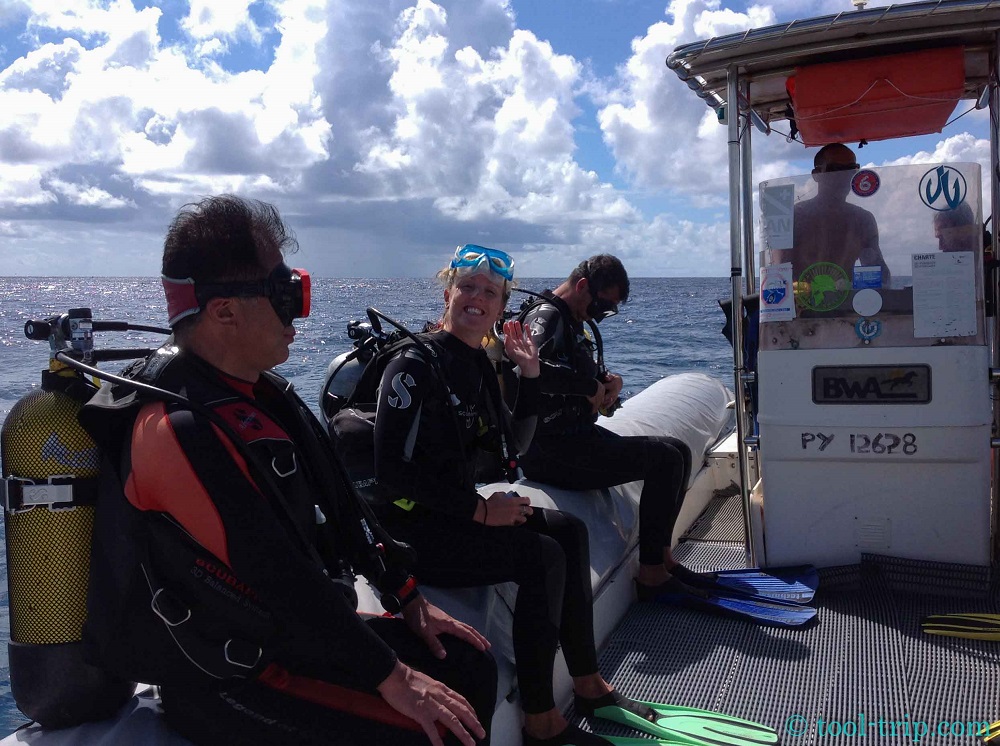 When we got to the surface I was ecstatic!!! Exhausted but ecstatic! JM likewise had just had the best time on the surface. He had been with the captain surfing the mascaret (current going out with wind blowing in the opposite direction = crazy currents and waves) with the boat in the pass. Humungous bottlenose dolphins were jumping everywhere and only a metre from the boat! Everything was happening in Rangiroa, hammerheads below, jumping dolphins above. What a morning!

Underwater fun in Rangiroa from tool-trip on Vimeo.

Check out the other video on this post, it shows JM filming the dolphins in the mascaret. 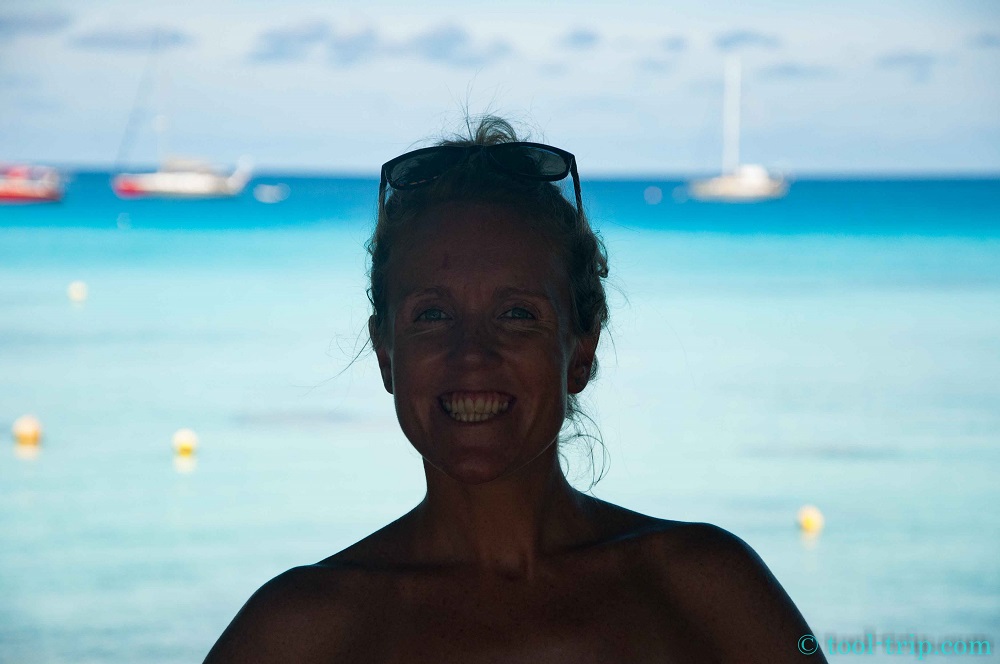 Under the weather underwater

The second dive of the day was at the same site and I was hoping for a slower, less violent current. 6 of us were booked on this dive and unfortunately the currents were still strong. This time it was like a washing machine going round and round particularly at the end of the dive when we reduced depth. For the first time ever I felt seasick underwater. It was a horrible feeling. The other guys on the dive weren’t as confident or experienced as the previous dive and there was a lot of unnecessary fin kicking, bumping and general carnage. I tried to keep my distance and enjoy what I was seeing (which was beautiful) but thinking about vomiting in my regulator at any moment was not fun! Back on dry land and feeling completely normal I could look back and appreciate the dive more. Exhausted from the crazy currents all morning and my fingers were completely shredded from holding onto the sharp rocks I was ready for a siesta and some hydration. I would definitely recommend 6 Passengers for friendliness and enjoyment whether a pro or beginner.

Late afternoon we took the bikes and cycled back to the same pass to check out the famous bottlenose dolphins, this time with our feet firmly on the ground. We brought some Hinano beers and sat at the side of the pass and saw a spectacular display of dolphins in the waves on and off for over an hour. They were enormous, I’ve never seen dolphins that big before and they were just playing, surfing and having fun. 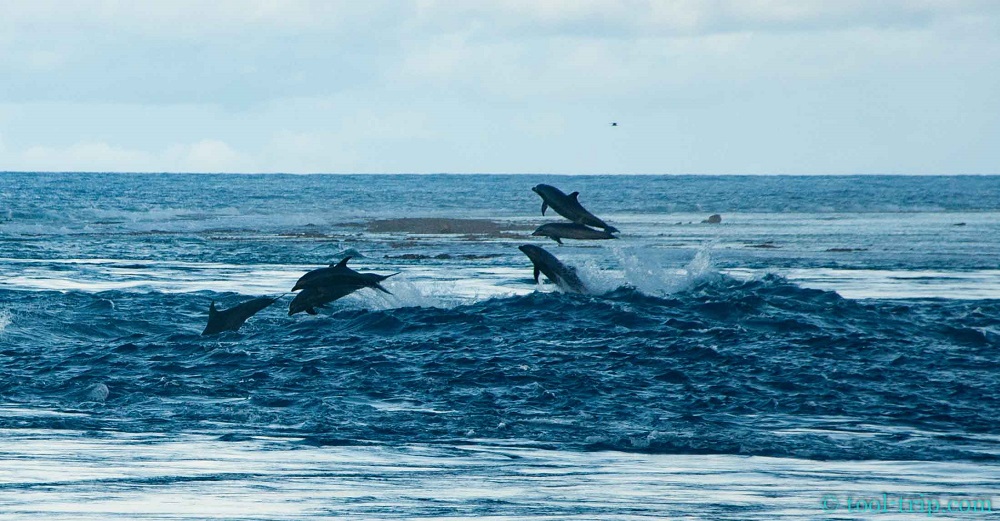 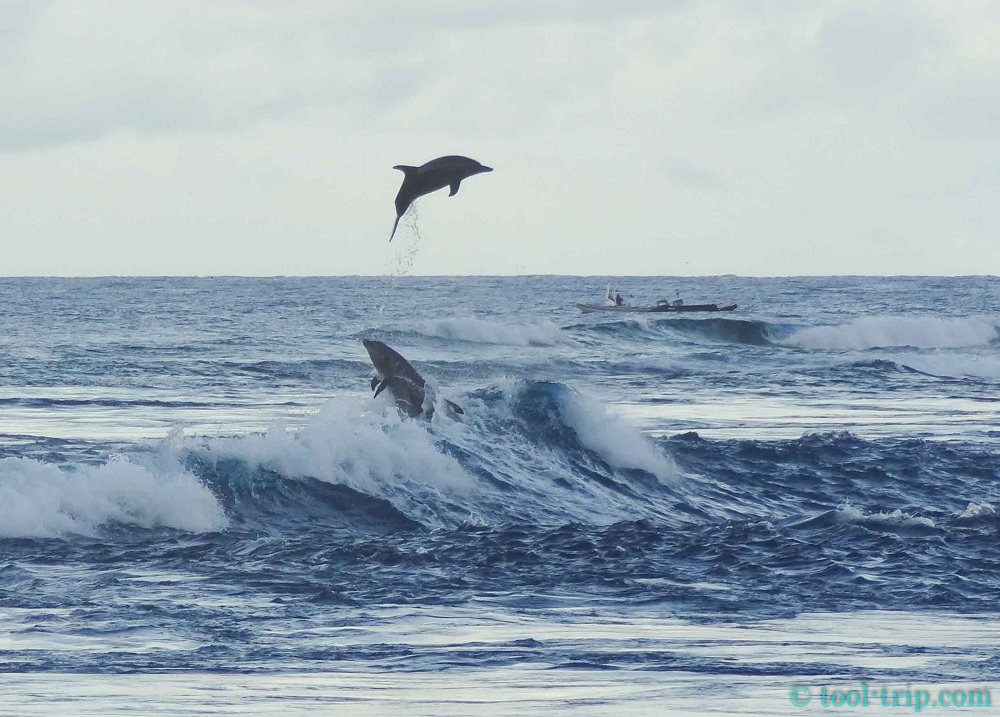 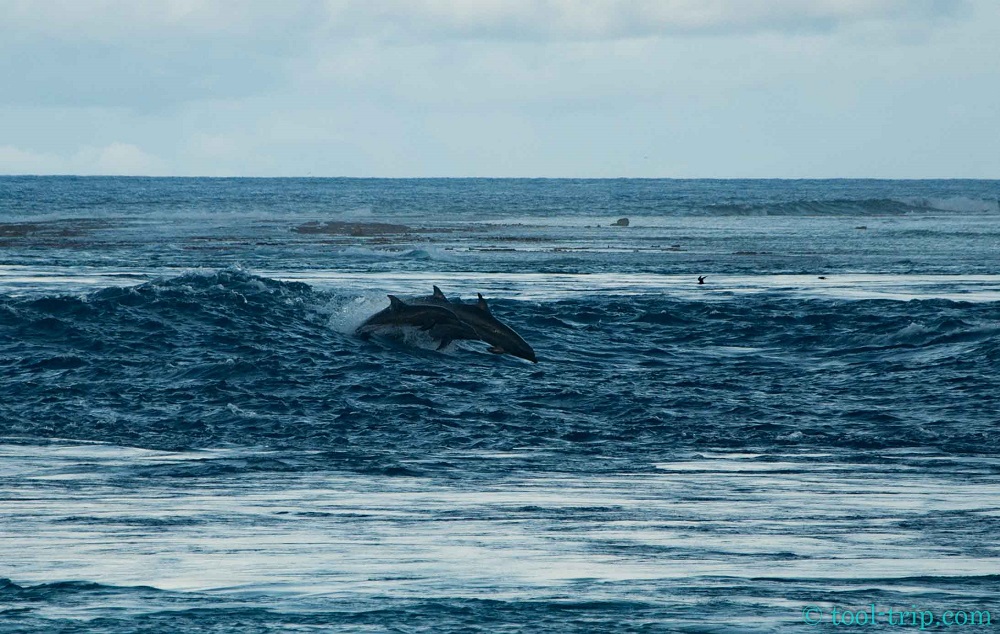 An evening with the dolphins

3 dives in Rangiroa were enough for me. The majority of the dives are in the same place and i’d seen my hammerheads so I was pretty darn happy. With JM feeling pretty ill and under the weather we spent the majority of our second full day in Rangiroa at the Pension with the other guests. Lucky we did because the weather turned suddenly. The wind picked up to 20 knots minimum, blowing straight at our tents with horizontal rain. We took it in turns to go check on the tents, tightening the guy ropes and putting large rocks and boulders on the pegs and corners. What an adventure! Everyone’s tent survived and JM felt better by the end of the afternoon. It was the day we also realised, and I hate to say it but….. French couples on around the world tours like us, are actually really darn lovely!!!! Well those in particular that are travelling around Polynesia! Haha!

The most beautiful pearls in the world

Unfortunately the weather continued to deteriorate. Overnight the wind was howling and the rain almost continuous. As morning came there was a welcomed break in the bad weather and we took the initiative to visit one of the pearl farms on the atoll who were providing a free guided tour. 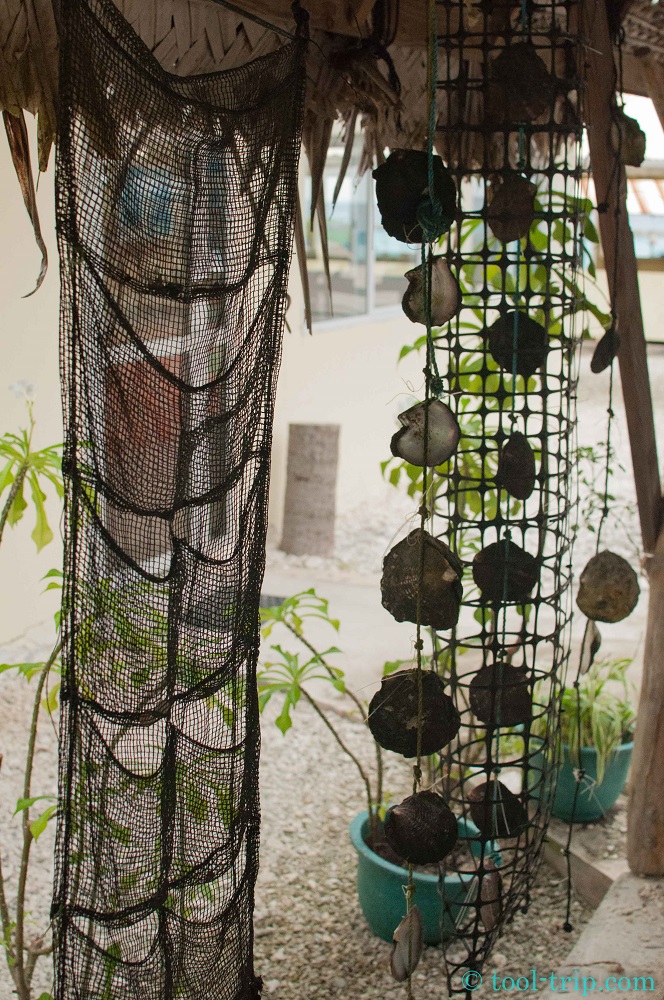 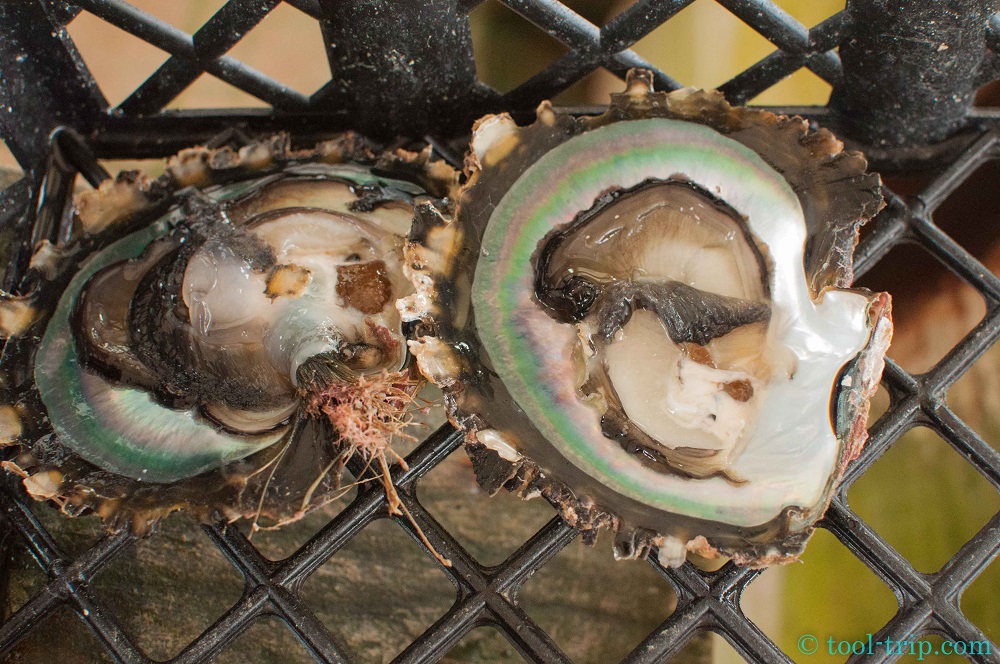 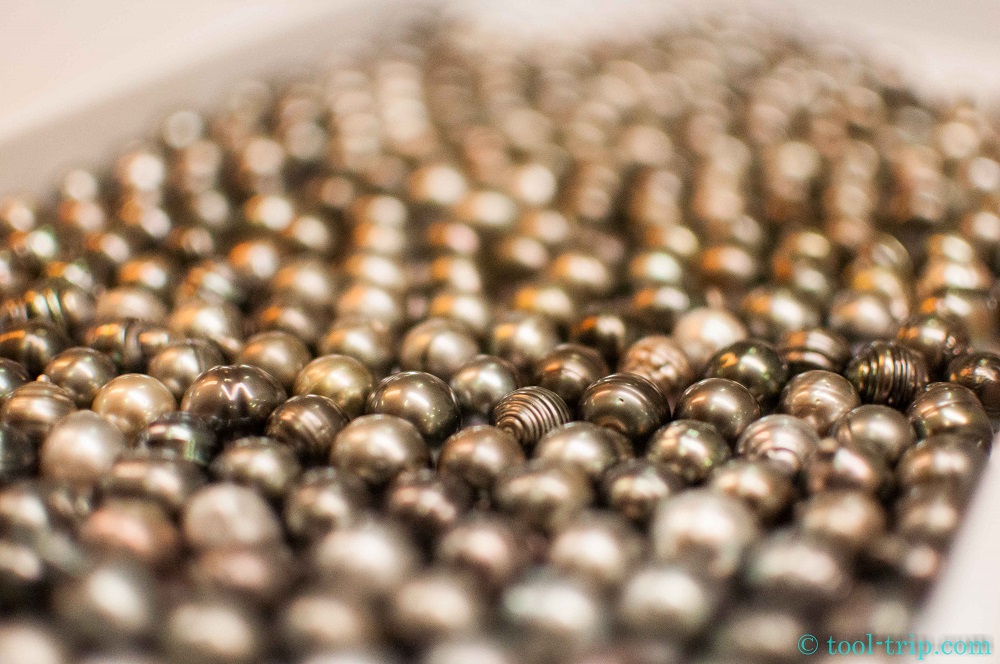 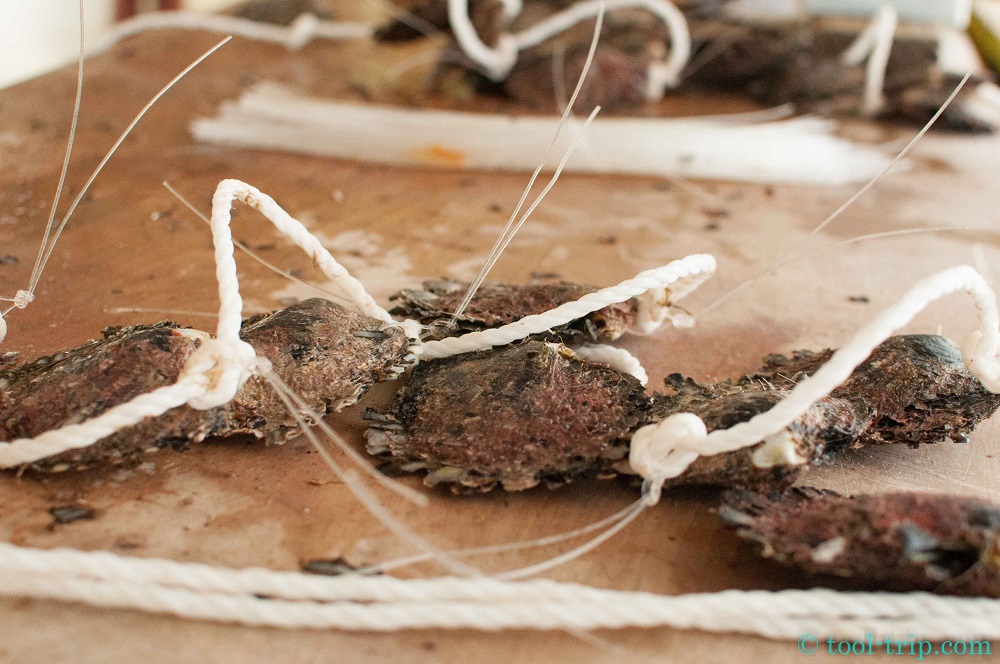 Pearls in the making

The visit was extremely informative but the French a little difficult and quick for my liking.  – JM tried to keep up and translate but I ended up reading up about it later. We got an insight into the production of the most beautiful pearls in the world (in my opinion), and it was a brilliant way to spend the morning. BONUS – I got some pearls!

With the weather still stormy and the roads flooded we returned to the Pension and spent the rest of our final afternoon socialising…. Rangiroa is a gorgeous atoll with lovely people, but there’s not a huge amount to do if the weather is really really bad like we experienced the last few days. Luckily for us there were a great group of people camping at the same time as us. 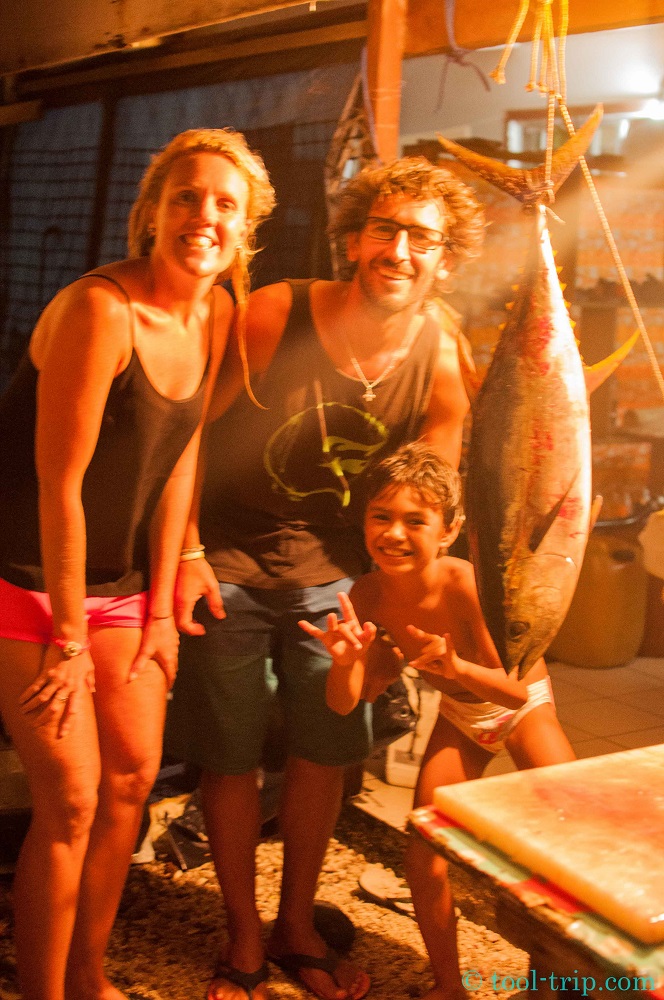 Our neighbour the fisherman’s son 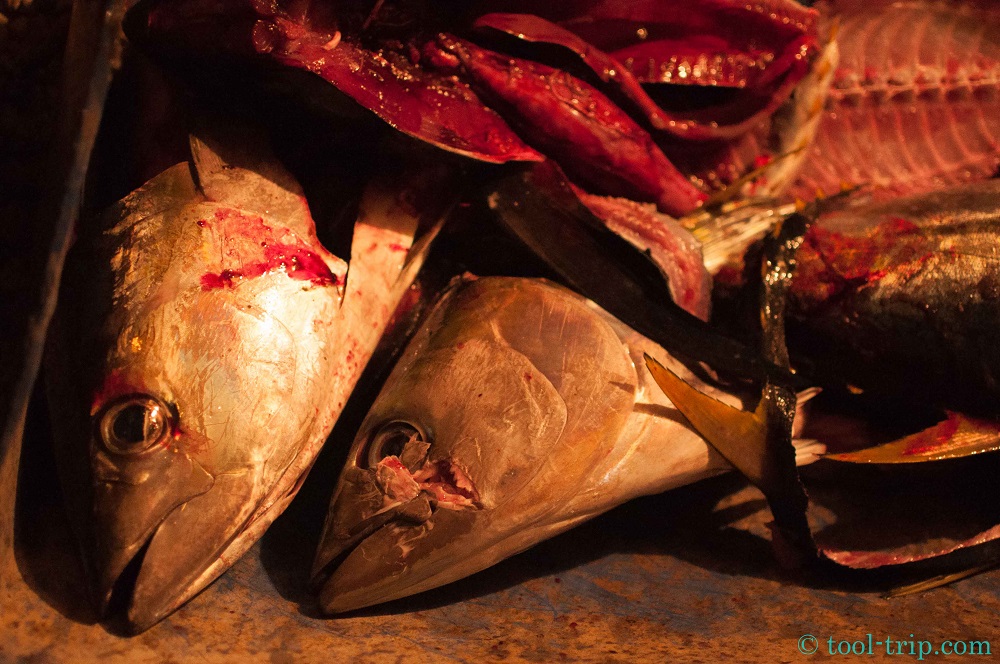 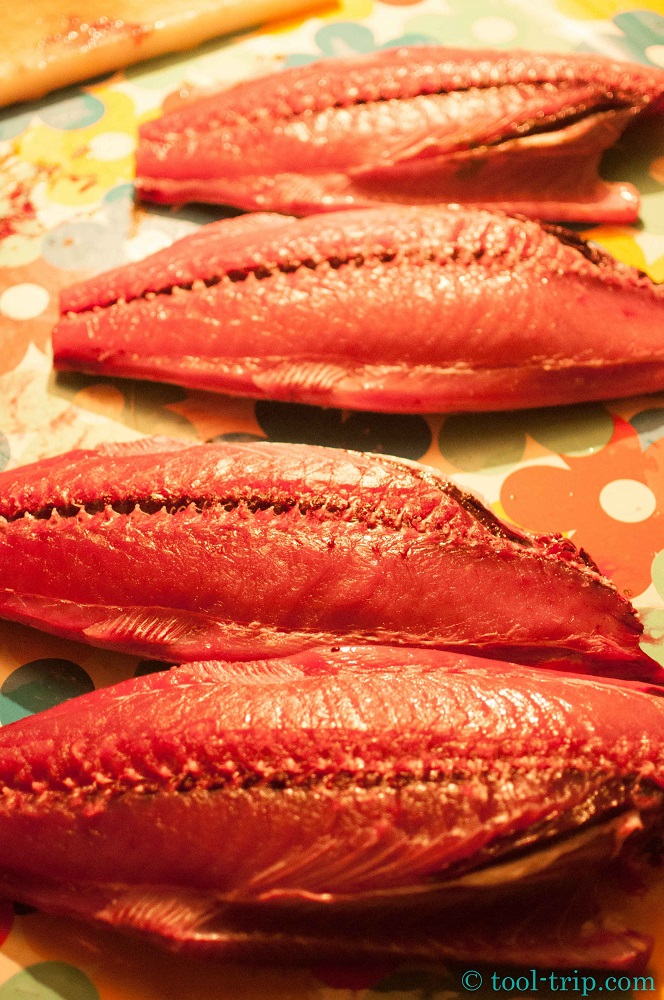 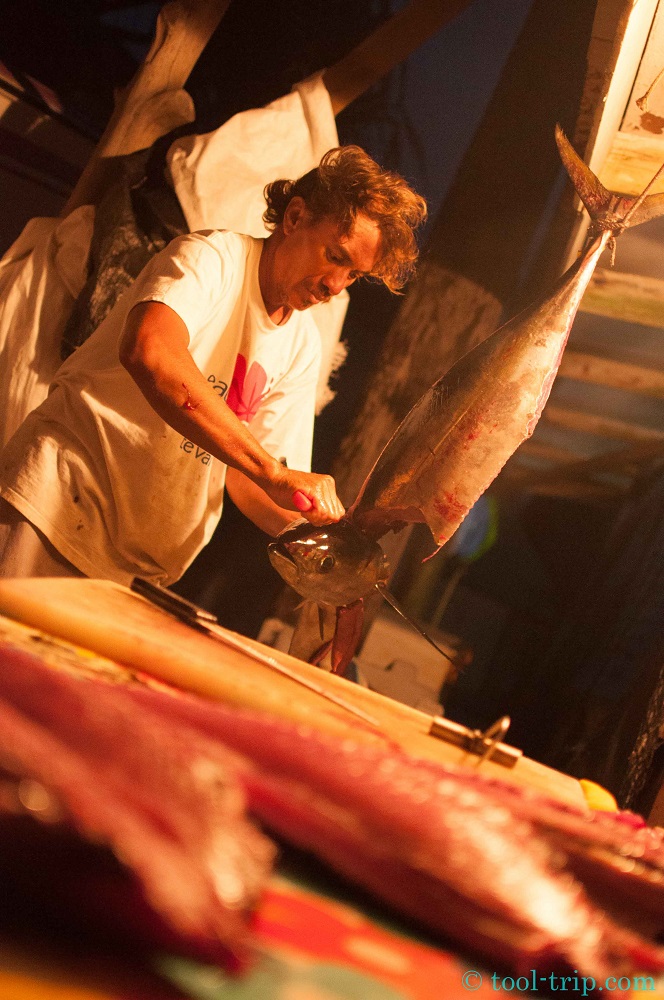 The best fisherman on the atoll (our next door neighbour)

Rangiroa was the last of our Tuamotu Islands. We had an incredible time. The diving was phenomenal. The people ridiculously friendly, and the weather perfect – except the last two days! Our next group of islands to visit are the leeward Society Islands, Huahine, Raiatea, Tahaa, Bora bora and Maupiti. Here’s hoping the next two weeks are as good and the first two! 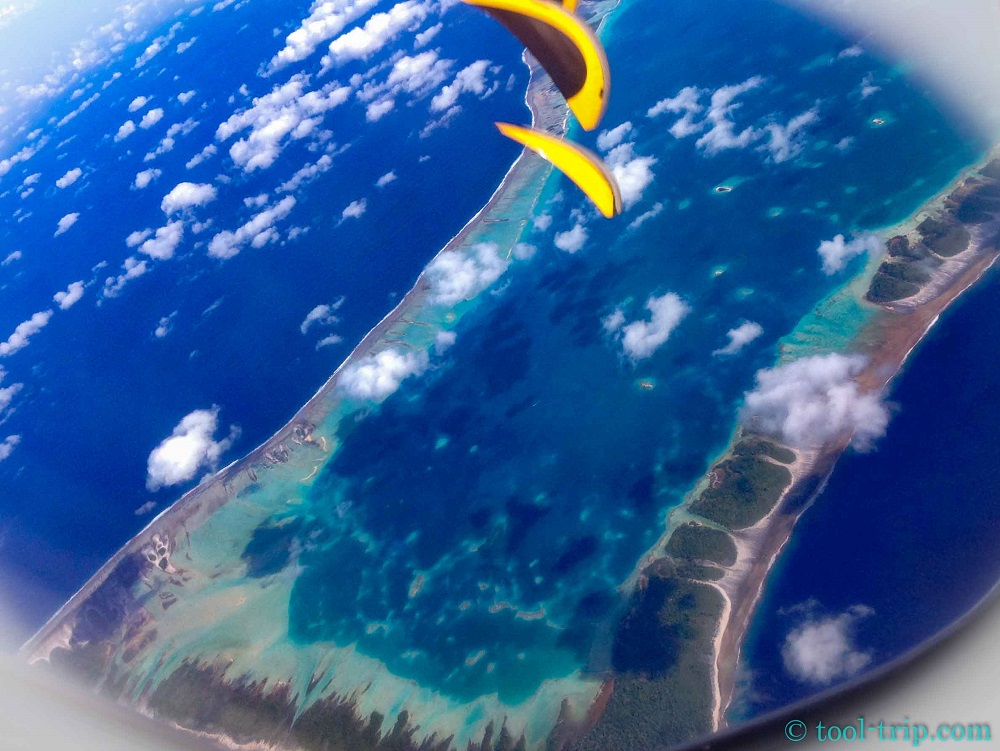 4 thoughts on “Rangiroa – Our third atoll of the Tuamotus”