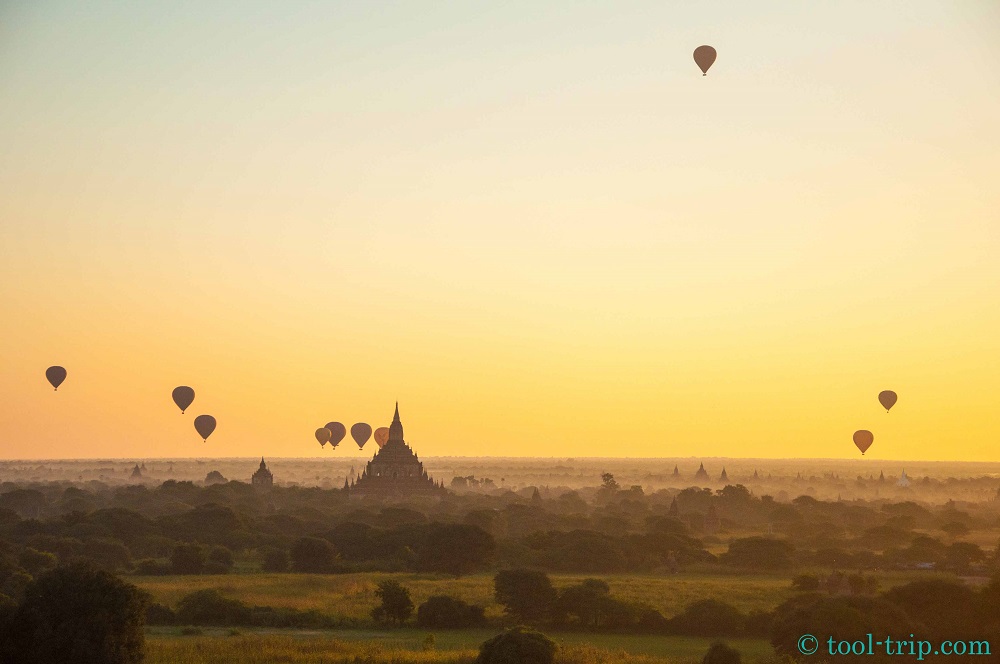 The famous Bagan – home to 2200 pagodas and temples and the top of our list of places to visit whilst in Myanmar.

After our first night bus experience in the country we arrived bleary eyed and groggy to a small bus station at 5:30am. The sun was up and taxi drivers were awaiting our arrival. They were already inside the bus before it had even parked shouting, “where do you go?” “Where do you go?” 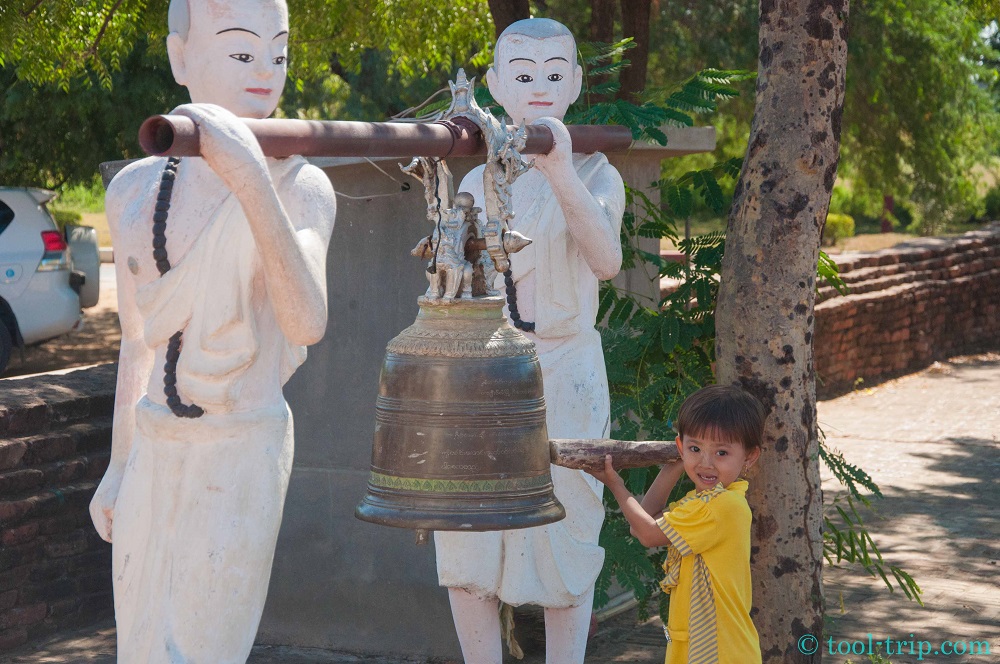 Enough already!! Do you all really need to scream at the top of your lungs in such a small space and at this time of the morning!

Quietly and calmly ignoring them we collected our bags and tried to get our heads together and wake up!

We kindly asked to get in the pickup with the locals but we were told abruptly – “No tourists, no foreigners.”  Good morning to you too.

The taxis were extortionate so we decided we would walk if taking the horse and cart was just as expensive. After a little negotiating we finally agreed on a price – 4 times cheaper than the taxi. Our ‘horseman driver’ was not very popular with the rest of the taxis drivers after under cutting them by a lot! We were happy though! 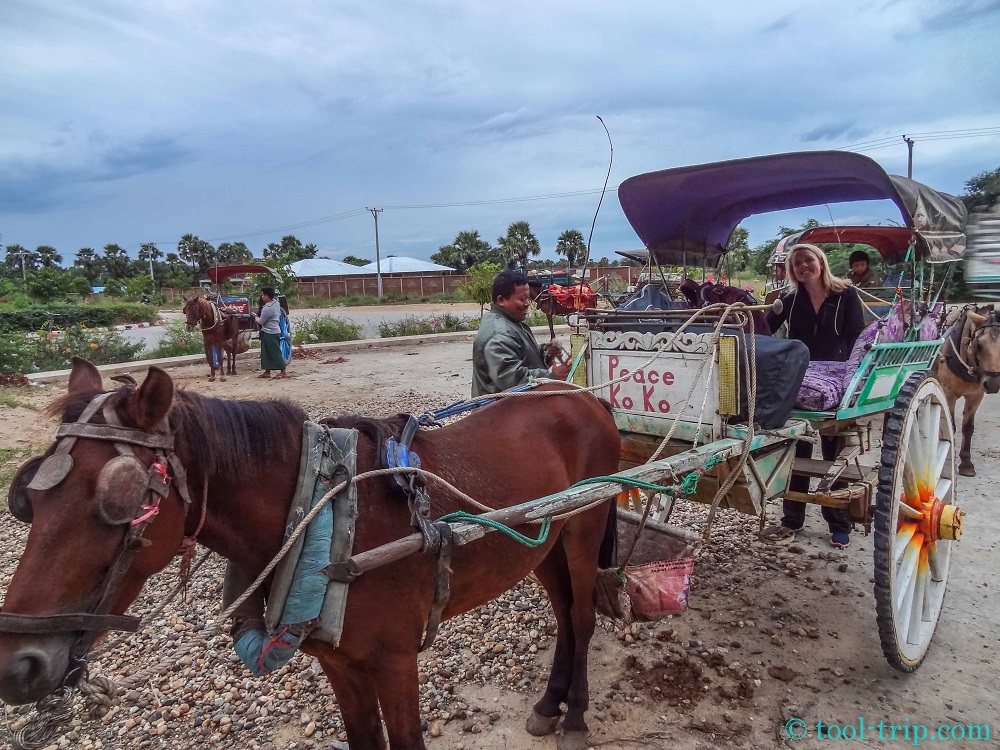 We headed to the small town of Nyaung U one of three villages surrounding the Bagan Archaeological Zone. The others being Old Bagan and New Bagan. Nyang U offered the cheapest accommodation in the area.

Our lovely horseman did a round of the hostels with us at no extra cost. Waiting for us whilst we checked some out. Most were crap and not worth more than 2$ a night! Eventually we settled with Pyinsa Rupa Guesthouse. The room was basic for what we were paying but it was the best of a bad bunch. The lady manager was a lovely crazy Chinese lady and breakfast was included.

After a long journey we took a power nap before walking around Nyaung U, visiting the lovely market and investigating the price of a boat ride along the river which many bloggers had recommended doing. Unfortunately it wasn’t the season and locals were not that convincing to us so we skipped the trip. 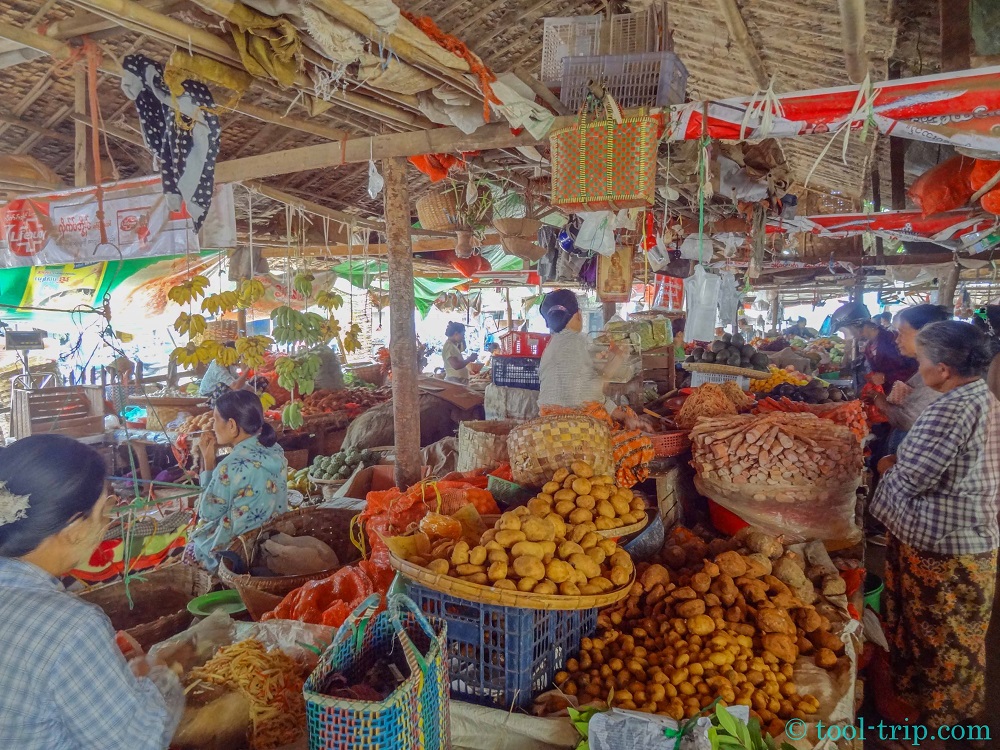 We later visited Shewzigon Paya, one of the most religious sites in all of Bagan. It was very impressive but unfortunately its surrounding villages were pretty rough as well as the dodgy stall vendors living almost inside it. 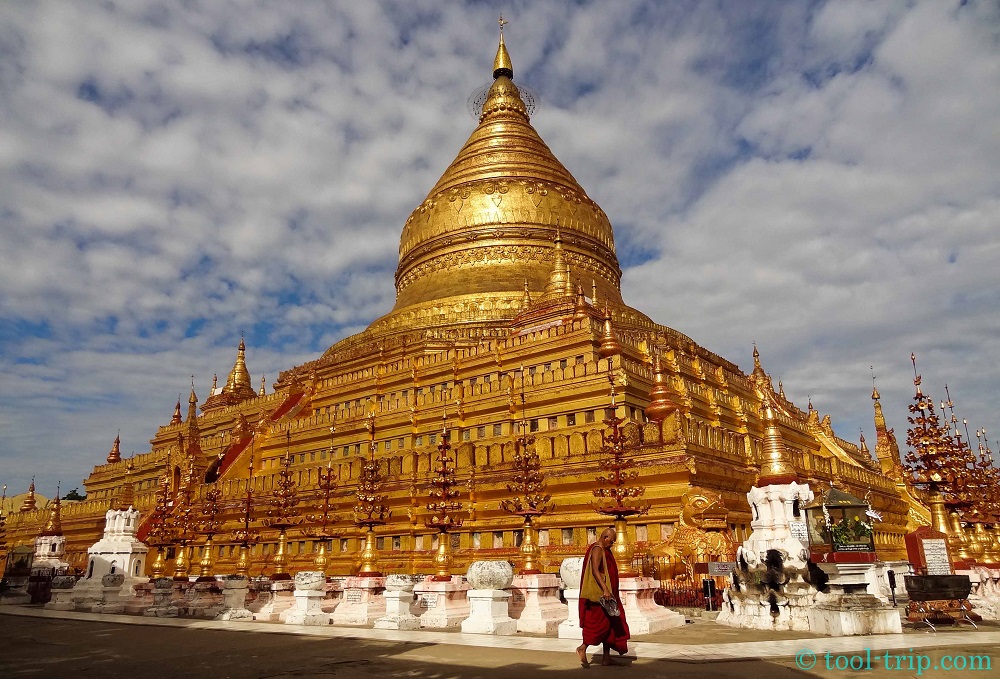 Later in the afternoon we jumped onto a horse and cart and went to explore some of the countryside and it’s thousands of temples as well as watching the sunset. – Horseman included of course. 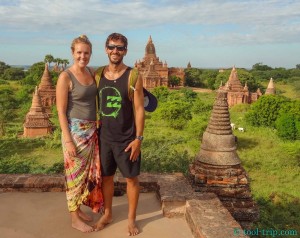 The whole area was beautiful. The small temples or what were left of many of them, were really interesting and it was great to chat to the key holders who provided us with further info and history of many of them (providing we looked and admired their sand paintings which apparently were their own designs and handmade. I swear I had seen an identical painting at the other temple down the road – I think someone needs to copyright their work……)

We finished the day with a beautiful sunset, sharing it with an entire Chinese photography class. Very funny! 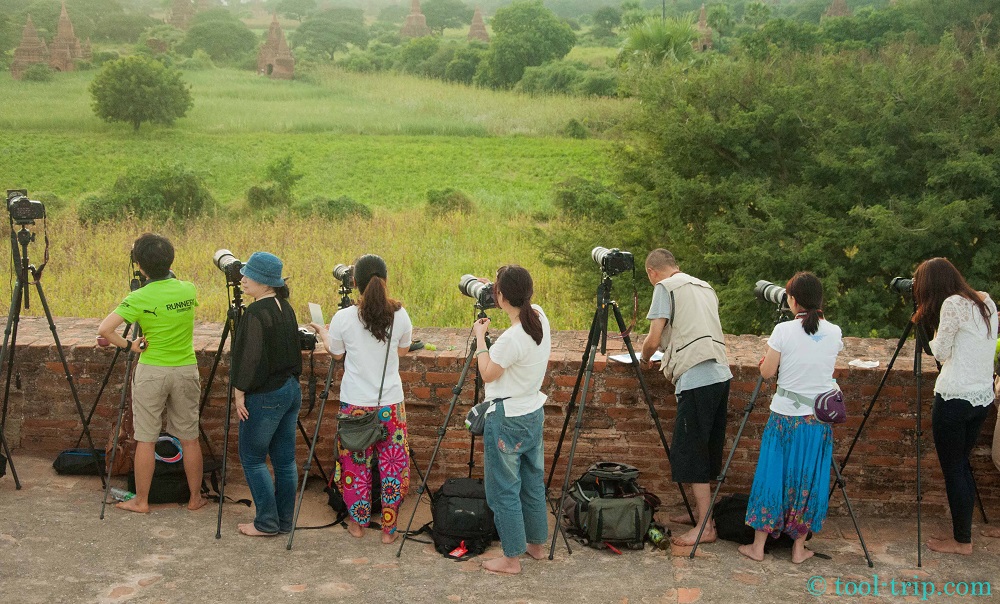 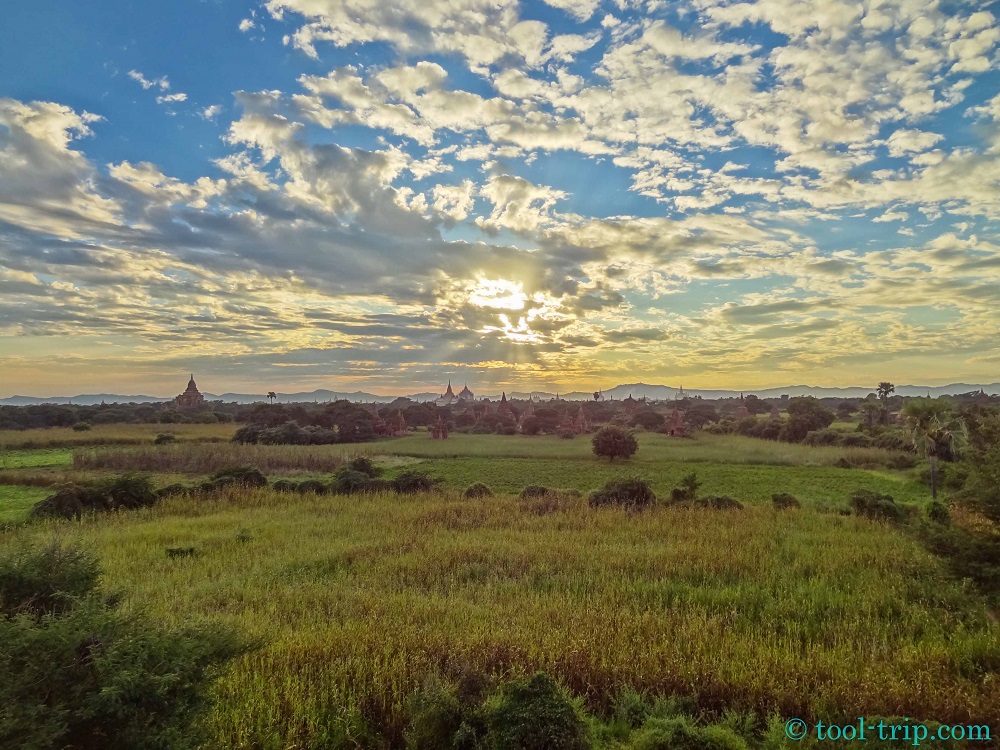 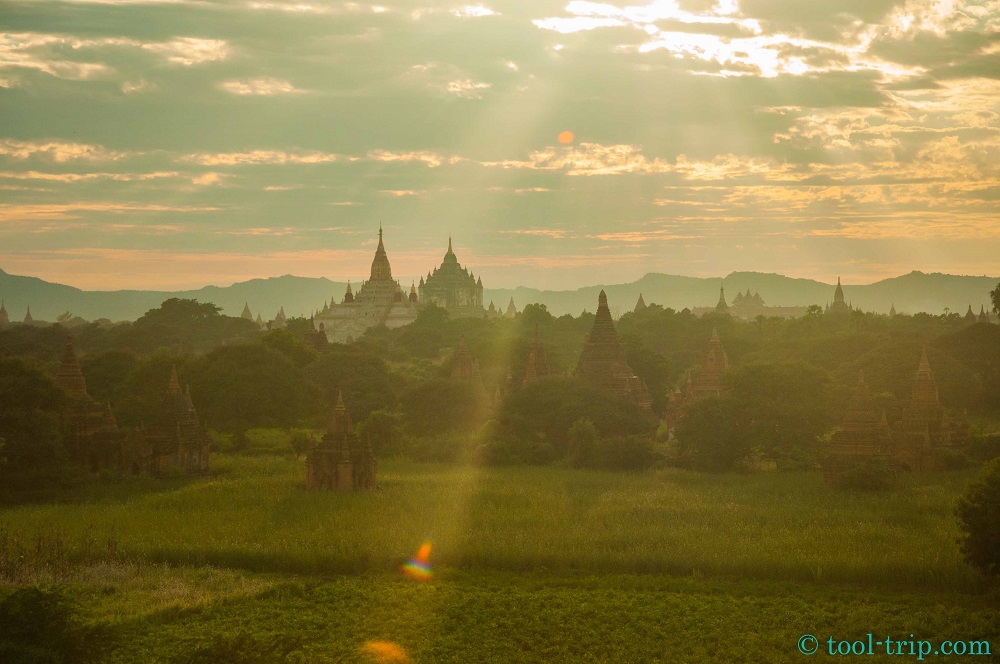 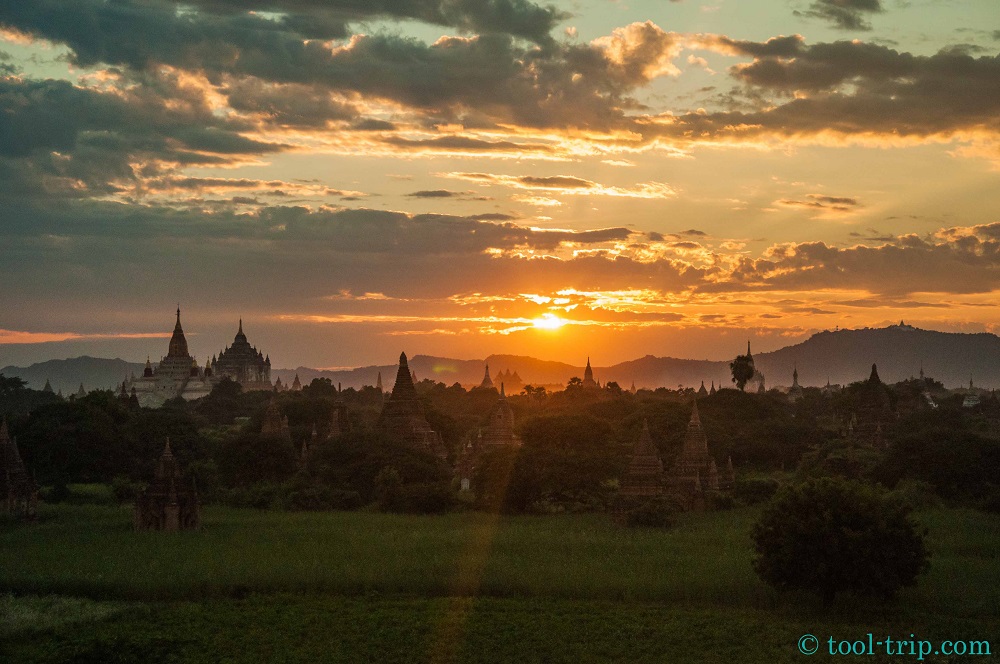 Early doors the next day at 04:30am, we hired an incredibly fast (NOT) electric scooter, and headed to ‘the spot’ for watching the sunrise – Shwesandaw Temple 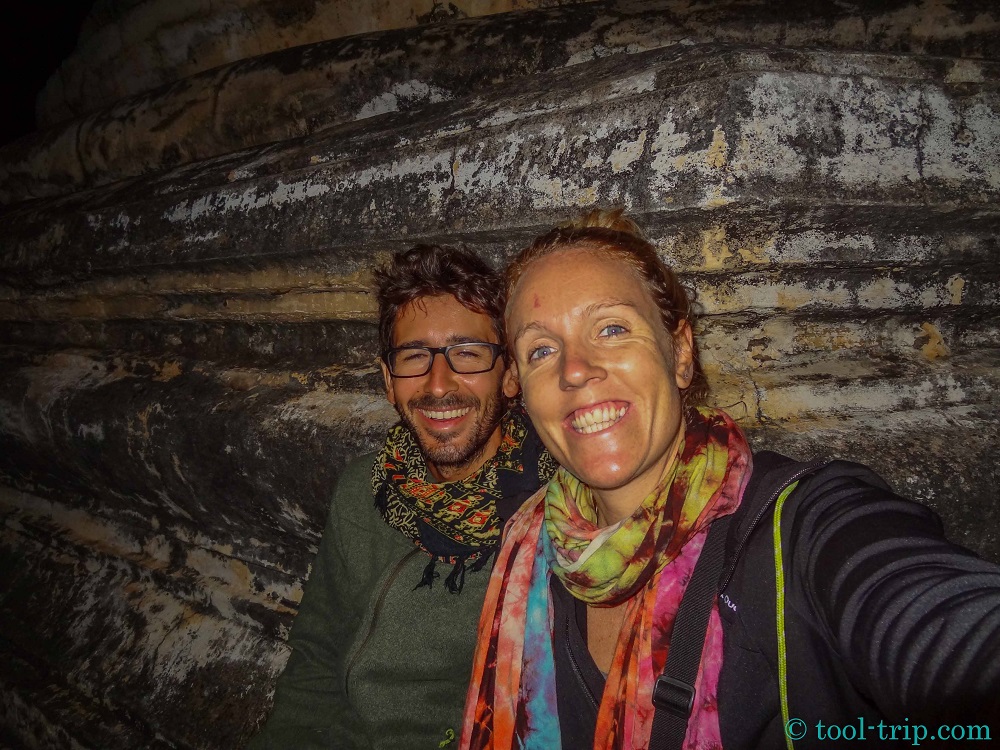 We had been warned it was a tourist hotspot and would be disappointed but we wanted to check it out anyway. 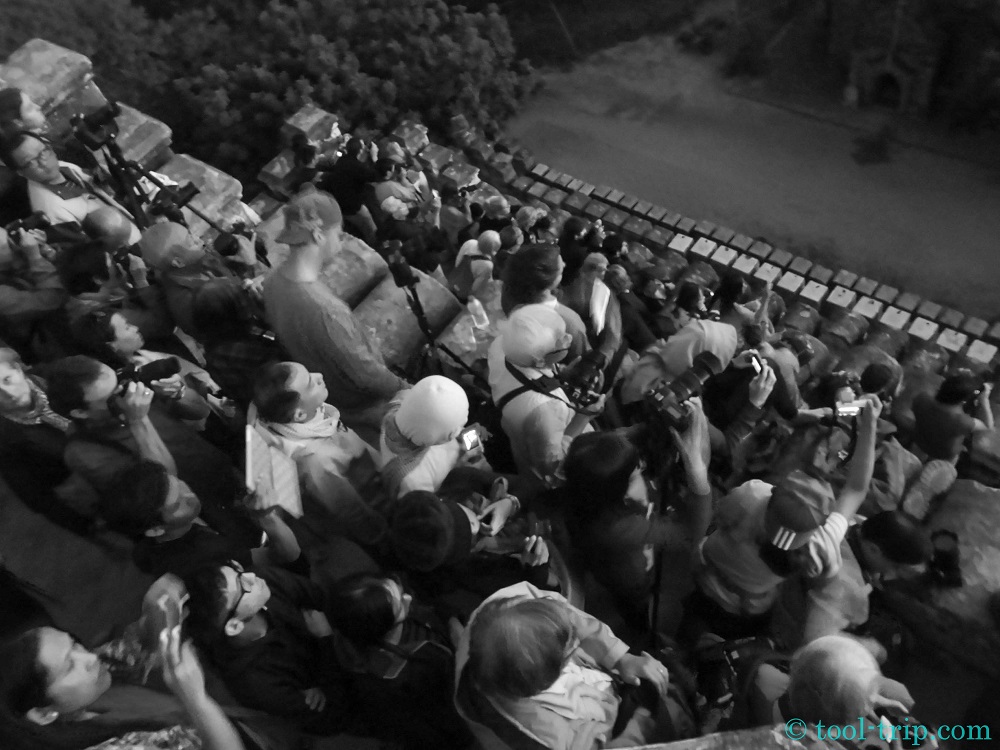 And Yes it was one big mass of tourists! We managed to climb another tier of the temple and had spectacular views with only a few other people. 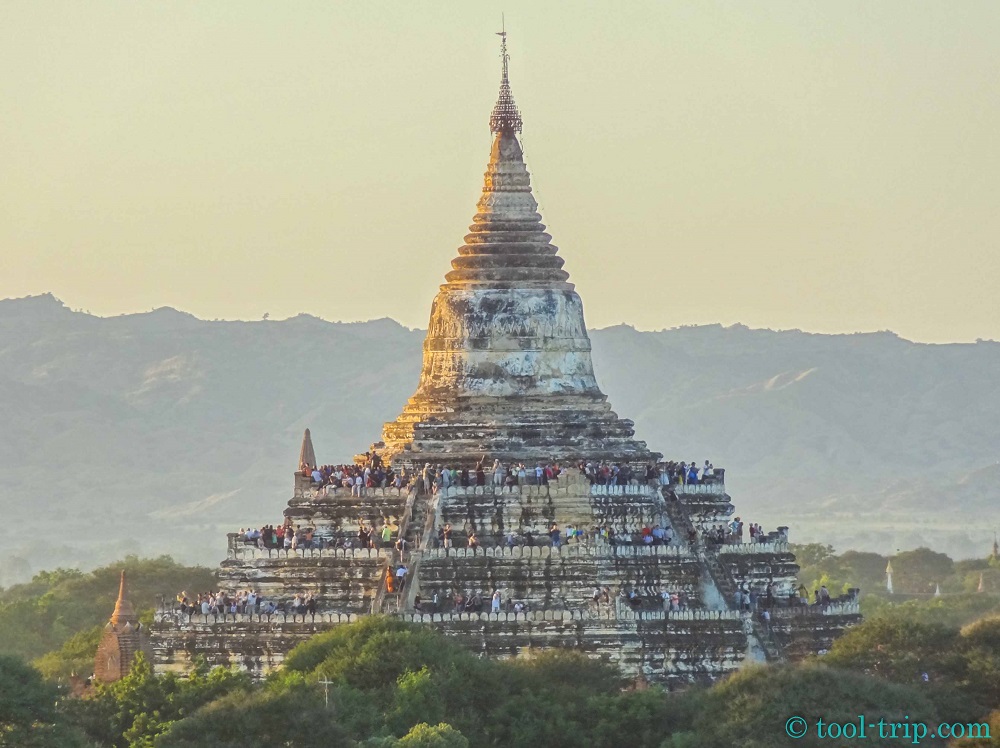 The sunrise truly was spectacular. An unforgettable memory and the 22 hot air balloons on the horizon made it that little bit more special.

The funniest moment came when the same Chinese photography group from the night before were all set up in prime position and chatting away but oblivious to the stunning hot air balloons taking off! It wasn’t until 10 balloons were already in flight that they noticed them and all squealed in excitement. They were obviously concentration hard on getting the best pics!! Priceless. It made all of us laugh though! 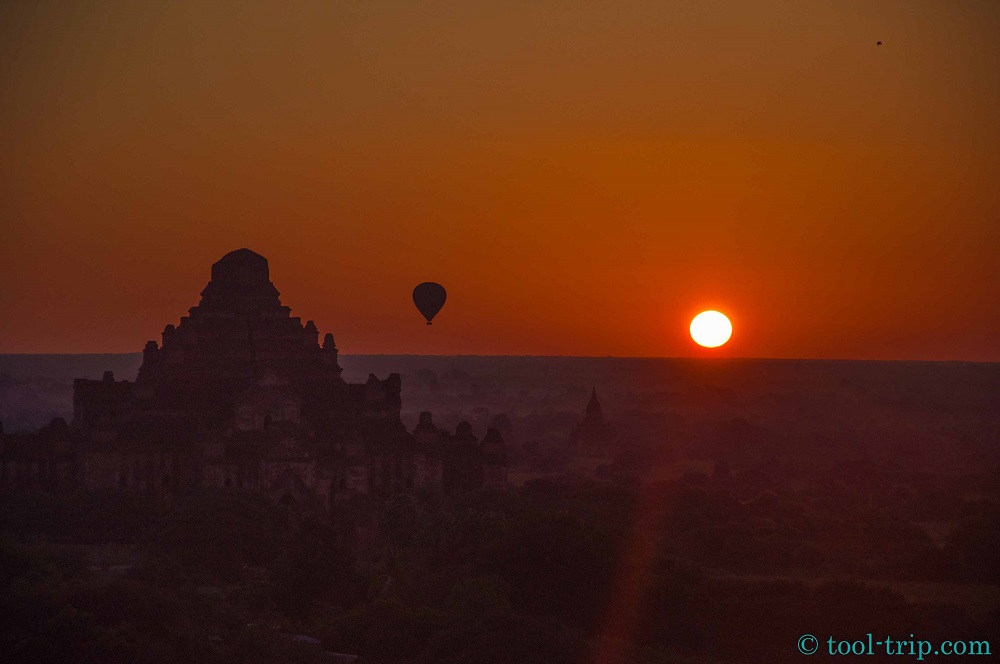 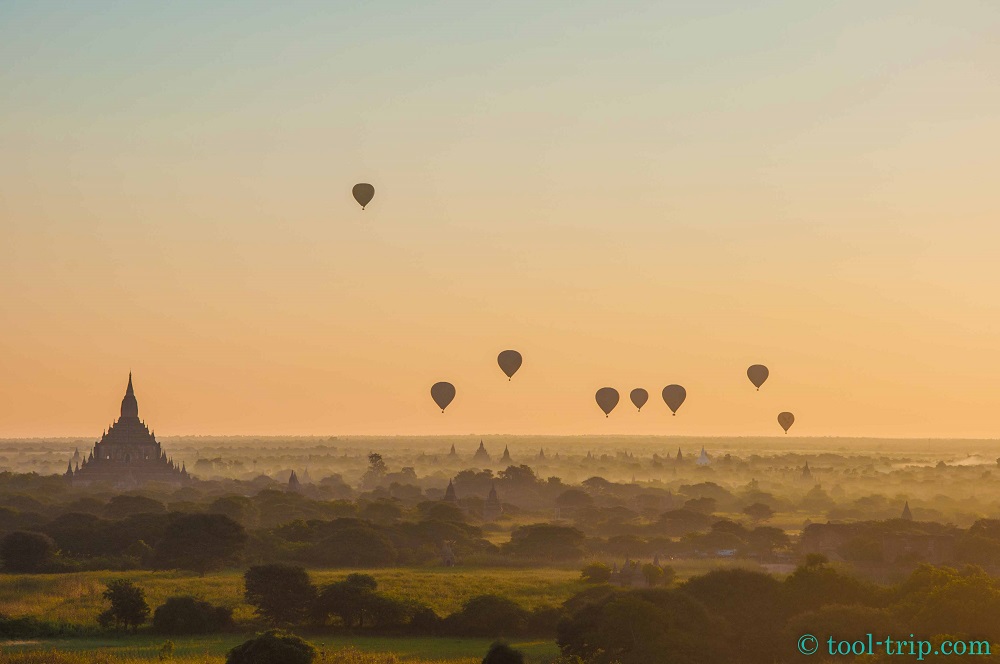 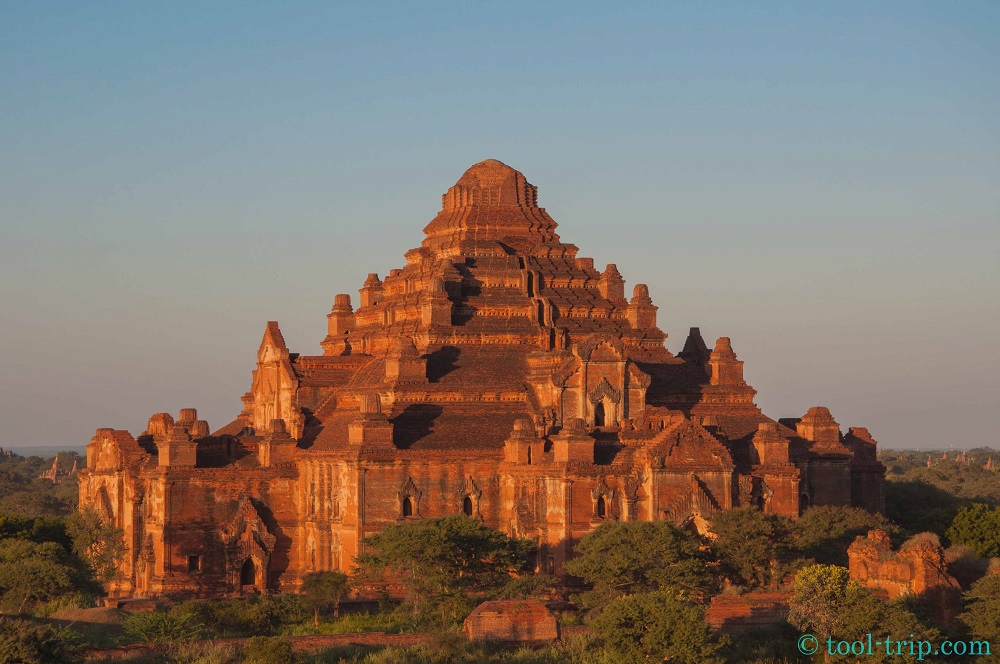 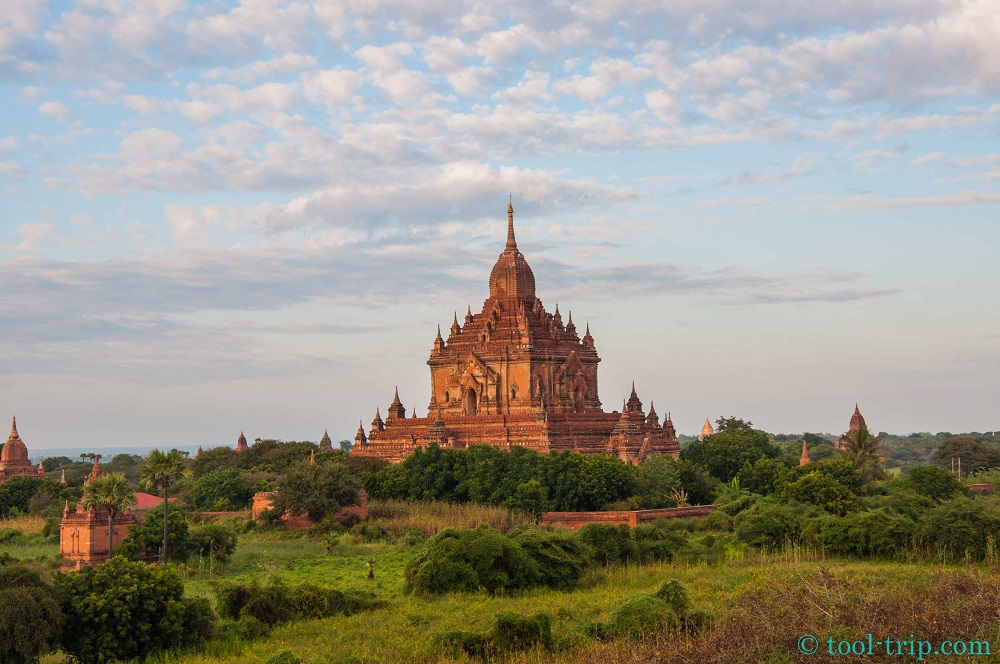 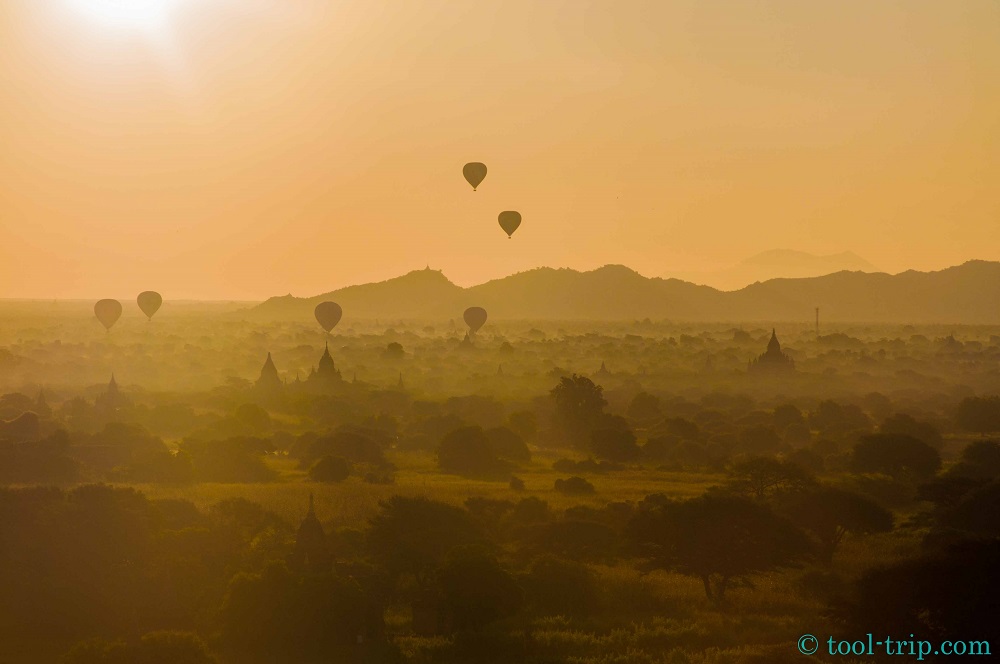 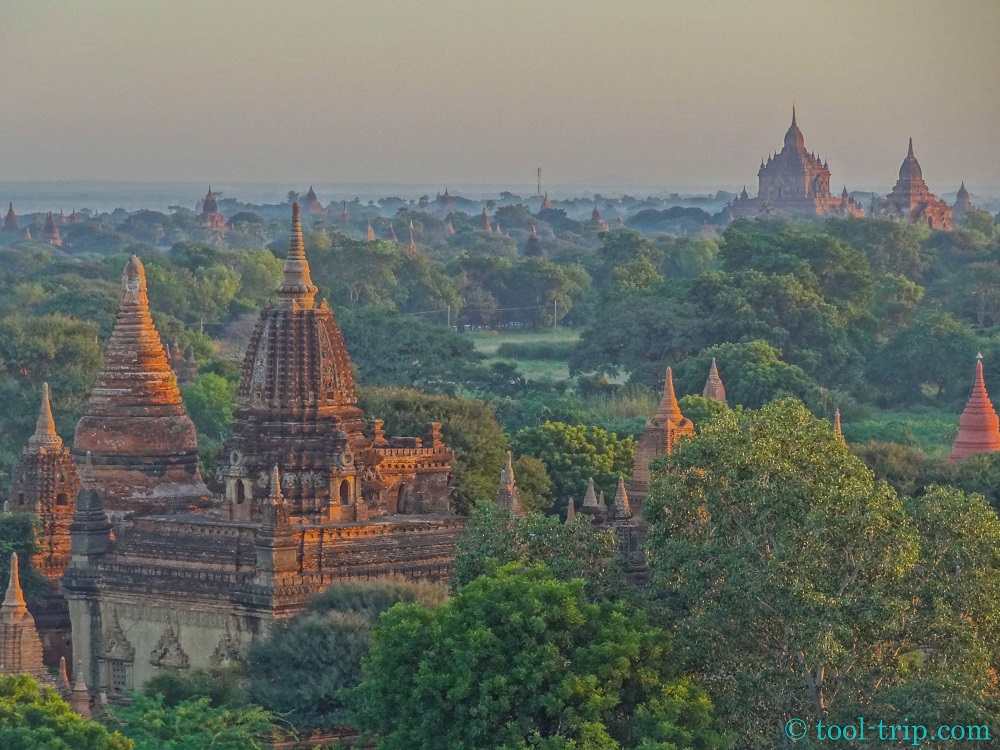 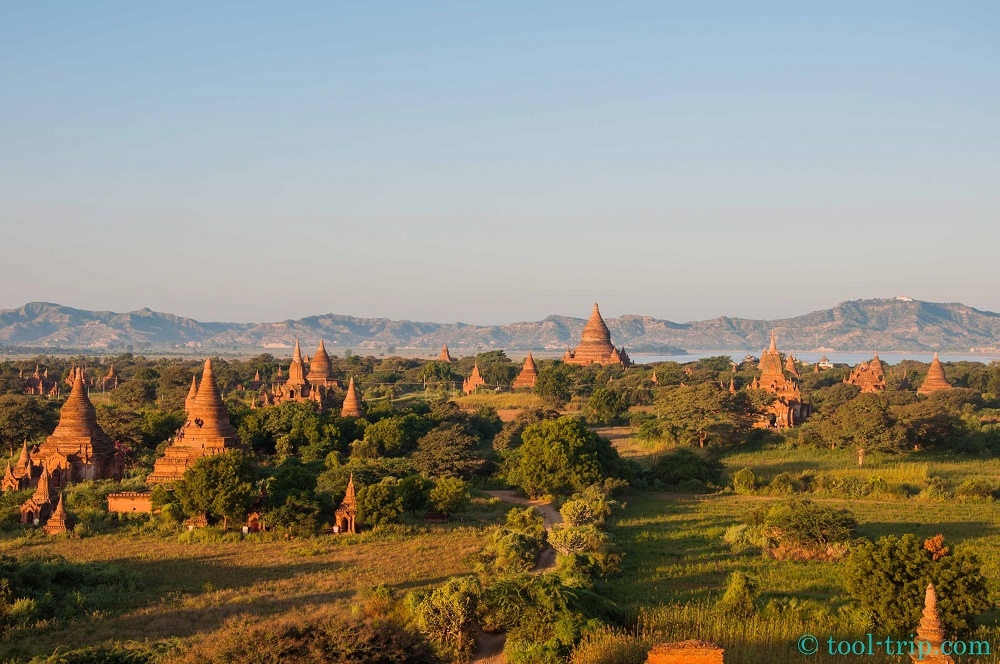 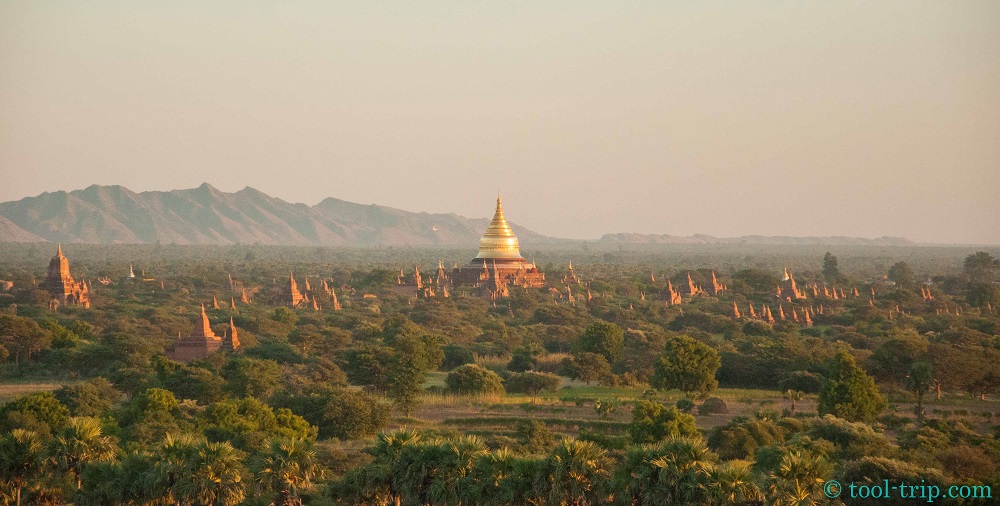 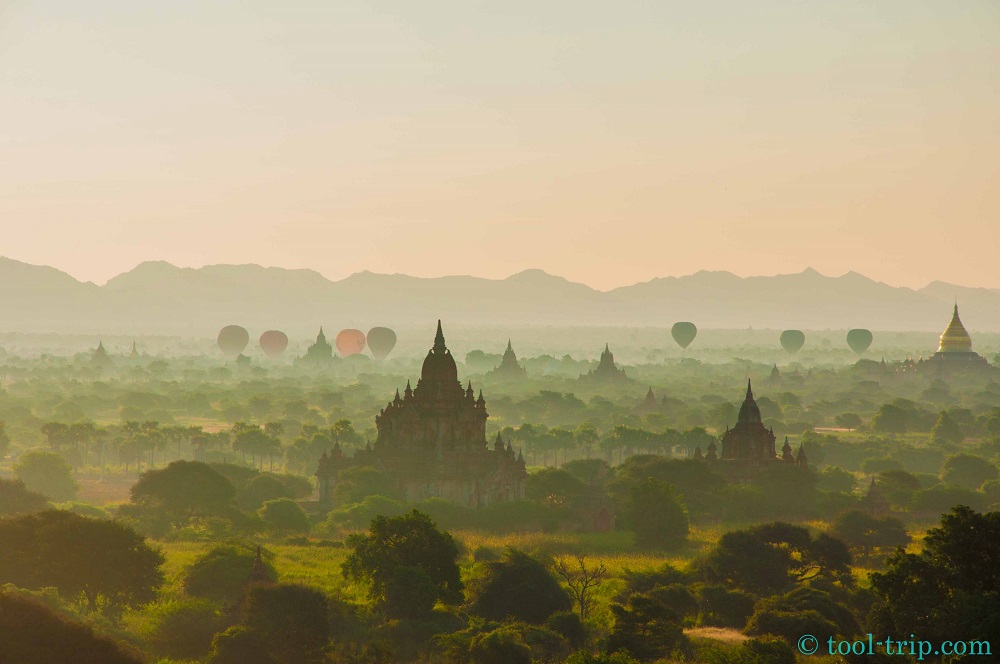 15 minutes after the beautiful sunrise everyone disappeared from the temple! Well except for a friendly Spanish girl and French guy. We were alone and there was some peace at last. 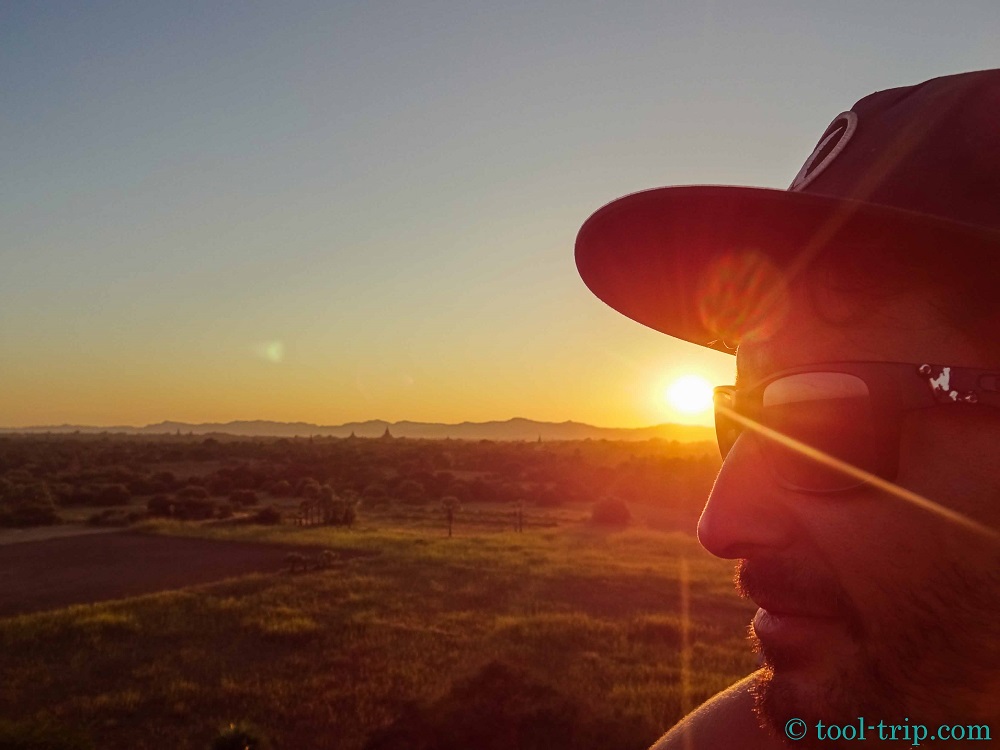 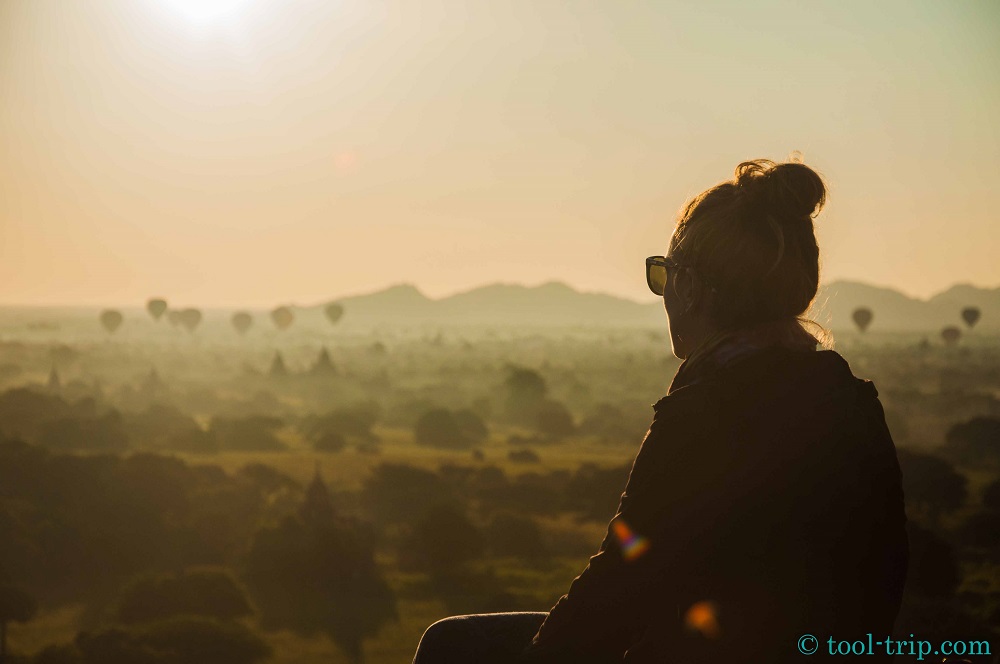 100s of people to no-one in 15 minutes! We got chatting to the others and could you believe it, the French guy worked for Sagem and was going to Toulon for a meeting with DCNS (JMs work if you didn’t know) the following week. Such a small world! 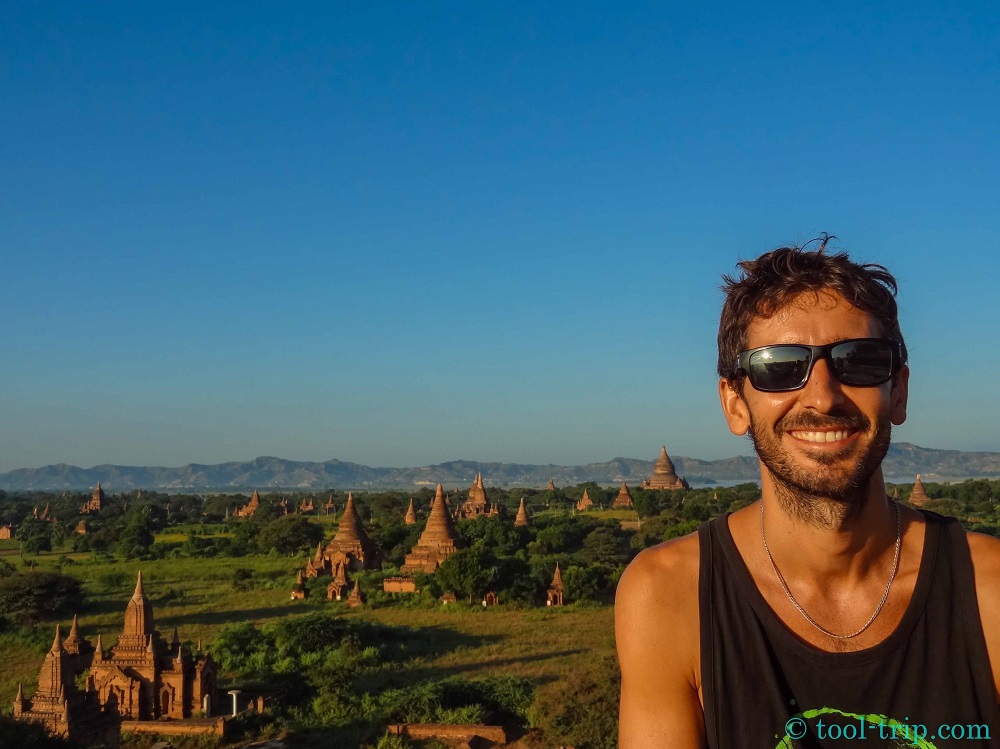 No one but us and this view!

The rest of the day we spent on the scooter exploring the vast area of temples. There was no one! We felt totally lost in the middle of nowhere and it was brilliant. We only came across others at the bigger temples. 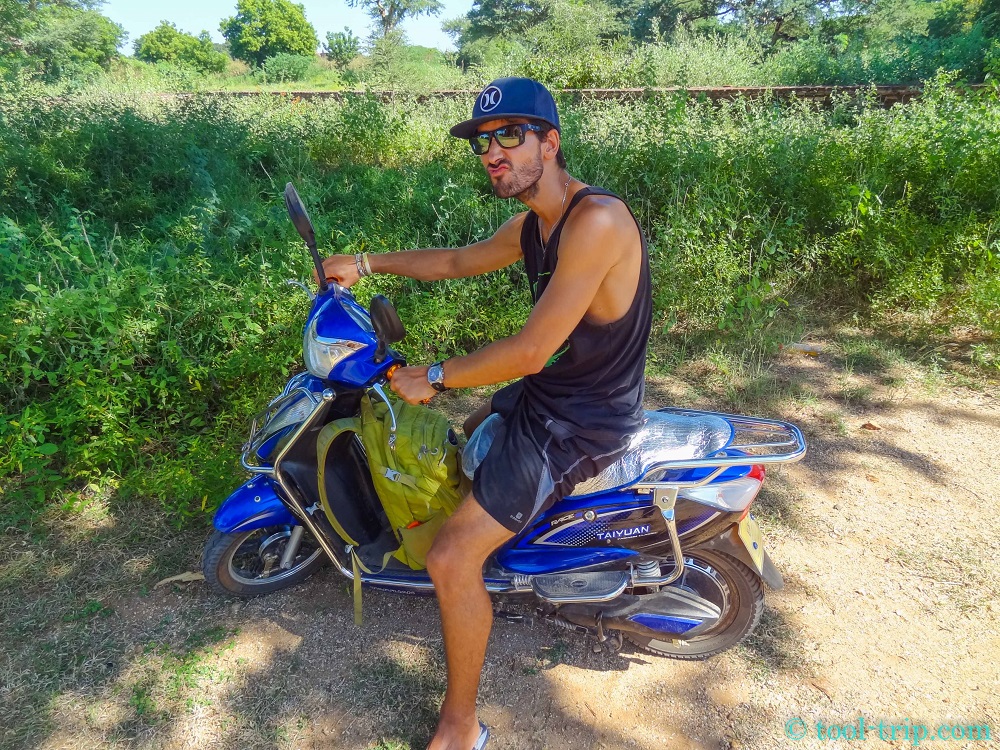 Although Bagan was beautiful, 1 day exploring on scooter, 1 sunrise and 1 sunset would have been enough for us. 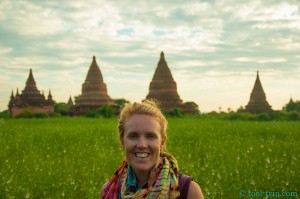 Beautiful place but unfortunately not the best ambiance.

We spent almost 2 days, 1 sunrise and 2 sunsets and we were ready to leave. We found the small temples and pagodas beautiful but we were extremely disappointed with the large temples. They were almost all rundown, dirty, dilapidated and busy with both tourists and horrible, rude and aggressive stall sellers – ruining the peacefulness of the religious site for us. Considering all tourists have to pay 20$ to visit Bagan and its temples you wander where your money goes to. The government of course!

We loved disappearing with the scooter into the surrounding countryside and we’d recommend that to anyone going to Bagan. The sunrise is a MUST even if you share it with 100s of people. You can find a handful of other smaller temples nearby which have small viewing platforms and there tends to be less people. It’s best to scout out the temples you want during the day. We found two different ones for the sunset. 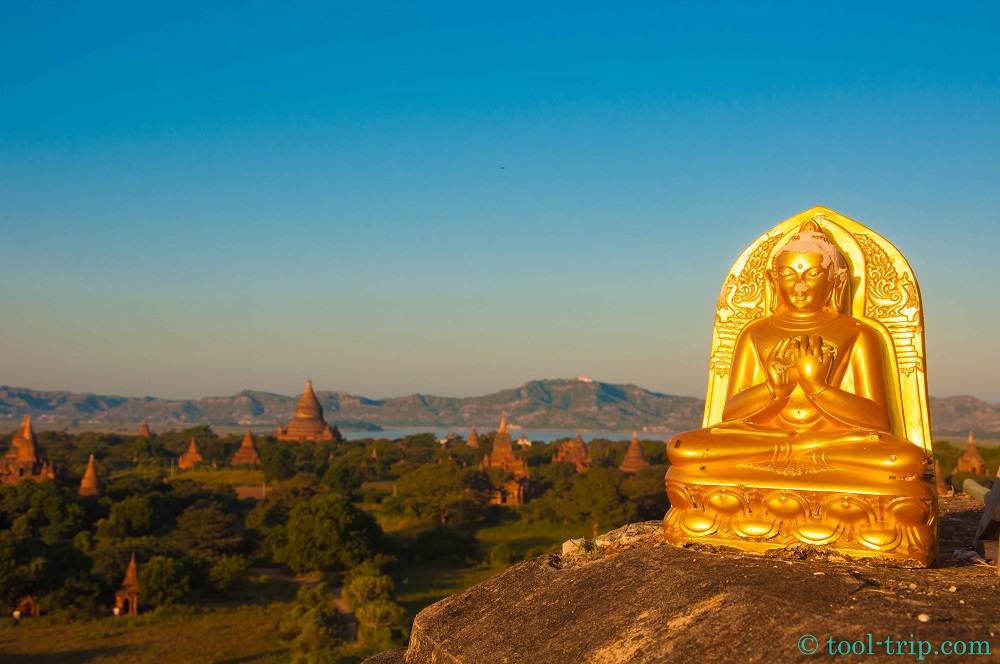